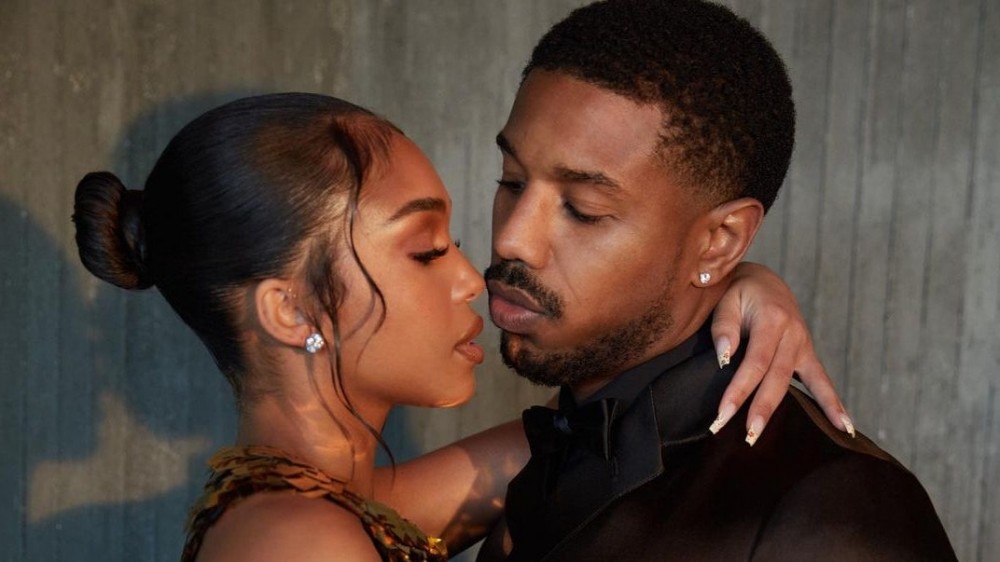 On Friday night, actor Michael B. Jordan hosted a small premiere party at home in California for the release of his new Amazon film Without Remorse. In it, he portrays a navy SEAL who uncovers an internal conspiracy, while seeking justice for the murder of his pregnant wife. A lack of an in-person red carpet didn’t stop the star from dressing up for the occasion. In fact, both he and girlfriend Lori Harvey brought their fashion A-game for the exciting night, wearing two sizzling (and custom!) looks by Prada.

Both ensembles were styled by Jason Bolden, who wanted to play up the celebratory feel of the evening through fashion. “Michael worked really hard on this movie,” Bolden tells Vogue. “He wanted to celebrate this victory. He told me, ‘it feels really nice to just put clothes on.’” While the night was intimate—including only a small number of friends and family—Bolden saw it as an opportunity to take the fashion to the next level, as he typically would for a Hollywood premiere. “The amazing thing with COVID-19 is that it’s brought people together; you get to have these big moments, but intimately with your family,” says Bolden.

The stylist landed on two custom Prada outfits for the couple. Starting with Jordan, Bolden opted for a sleek, modern suit in a delicious chocolate brown satin. “We knew we wanted to do a double-breasted suit,” says Bolden. When he started thinking about which label does that silhouette best, he instantly thought of Prada for it. “They do classic suits with a twist,” says Bolden. “I wanted to do something with color and not just a classic cotton wool suit.” He then accessorized the look with a discreet black bowtie and sleek Bulgari watch.

As for Harvey, Jordan wanted to amp things up a bit, while still complementing Jordan’s suit. “I wanted something that could sparkle—to be that confetti, disco vibe,” says Bolden. Their choice? A glittery gold Prada gown. “We took it back to those days when Hollywood would have these grand parties,” says Bolden. “Sidney Poitier and Diahann Carroll would have these great parties at home, and people showed up dressed to the nines.” As for accessories, he kept it simple, finishing it off with towering black platform sandals and subtle jewels from Justdesi. “I didn’t want to go too much with the jewelry. Her dress was a big piece of jewelry,” says Bolden.

For Bolden, styling a big-name couple like Jordan and Harvey is always a fun challenge. “Styling duos is always interesting,” he says. “You have to figure out how to merge them as a couple, but still [allow them] to own their individuality.” The key to success, as evidenced by Friday’s looks, always is a similar color scheme. “One can wear a wild silhouette and the other something more sleek and easy, and it always merges perfectly,” says Bolden. “The beautiful thing is Michael and Lori just allowed me to create. The magic is in the trust!”