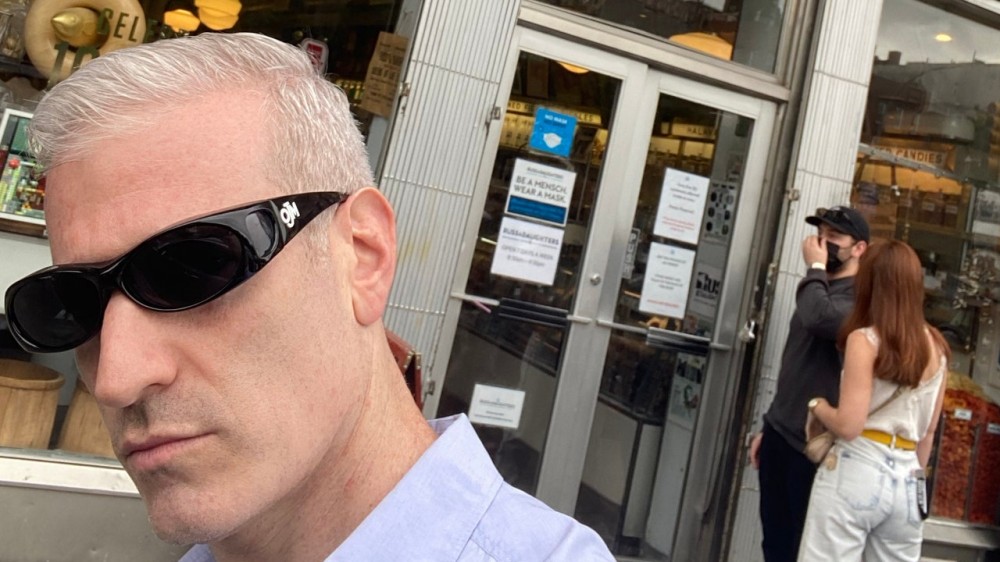 Welcome to Shopping With Vogue, a series in which we sift through a fashion lover’s favorite store. For this edition, we shop with creative director Mel Ottenberg a.k.a @melzy917 for sunglasses created by @oldjewishmen.

Call it an unlikely love story between a viral Instagram account and a high-powered fashion player. Aside from both being Jewish, the two entities could not be more different. In one corner, you have the crotchety, kvetching @oldjewishmen Instagram account. The feed is filled with famous types like Adam Sandler in fantastically bad-fitting basketball shorts and a perpetually unimpressed Larry David, along with a screenshot of a New York Post article about a 91-year-old lox slicer returning to Zabar’s, a zoomed-in image of a man’s unkempt eyebrows, and zillions of images of unknown balding men with postures so bent they look like life is physically weighing down on them. On the other hand, there is Mel Ottenberg, the handsome creative director of Interview and was, until 2019, Rihanna’s stylist. Despite their differences, they’re mutual fans. Ottenberg will comment on a slideshow of Jerry Seinfeld with “hot” or weigh in on a bagel rating. He also has worn an Old Jewish Men (OJM) tee—yes, the account sells merch—that reads “Ralph Lifshitz,” a spoof on designer Ralph Lauren’s logo and birth name. The affection is mutual. The founder of Old Jewish Men, Noah Rinsky, says of Ottenberg, “he clearly likes deli and dressing like an old man and is barrel-chested, just like me.”

The “Ralph Lifshitz” shirt is not the only merch that OJM is selling, and in fact, they have just released a pair of sunglasses that Ottenberg has had his eye on. The shades were created by Rinsky and chief business partner Bryan Seversky. (Neither men show their faces on the account, preferring relative anonymity.) The sunglasses themselves look like they were ripped from the glasses display case at Duane Reade. The ovalish frames, like two smooshed spoons, come complete with a tinted side lens panel and a stamp on the inside that reads “China”. Besides a tortoiseshell frame, which is the sole whisper of modernity, they are fit for a geriatric and priced at $34. (Shipping not included).

And yet, there is a special charm to them. “I haven’t been looking for sunglasses because sunglasses look terrible on me unless they are giant geriatric sunglasses so I know these Old Jewish Men ones are going to work,” says Ottenberg. “I do have the Celine ones but I really do look like Joe Biden in them, which is fucked up because he is 78.”

To get the sunglasses, Ottenberg will meet Rinsky on set for the Old Jewish Men pilot, which is serendipitously around the corner from Katz’s Deli. (Titled “OJM Solars,” the shades go on sale today at oldjewishmen.net). The show, set to be released in fall, features a handful of old Jewish men, and “the token gentile, John Johnson” causing a ruckus around the city. Over the next few weeks, they’ll be filmed protesting the uptick in lox prices and rallying for more public toilets. Today, they are doing aerobics on the sidewalk outside an Equinox. An employee promptly comes out to yell at them and call the police. Surprise, not everyone loves the presence of a hoard of complaining elderly men.

None of the outer world’s opinions on the concept of Old Jewish Men affects Ottenberg, who grew up as “culturally Jewish” and had a Marrakech-themed Bar Mitzvah. In fact, he has a soft spot for the grumbling ethos of OJM. Rinsky notes that he started talking to Ottenberg via Instagram about a year ago. “Mel and I met after bonding over Ralph Lauren’s origins and deli food,” he says. “Mel comes from a family of bakers and my family was in the delicatessen business.” Ottenberg’s response is a bit more succinct: “I think we just found each other on Instagram as one does,” he says.

Today, Ottenberg arrives at the set of Old Jewish Men looking extremely polished in a shirt by The Row, a pair of slim-fit Dickies pants, and a Bottega Veneta belt. It’s a stark contrast between the old Jewish men actors who are in plaid shirts and chinos, right? Not so. “I kind of dress like an old man. I’ve always been into Jerry Seinfeld’s fashion and I feel the need to tuck my pants in even if no one else does,” says Ottenberg. “I like to wear my pants high-waisted. I think it has that sort of attitude and swag.” He isn’t the only one who thinks that there is some sort of allure that comes with mensch-dude garb. “Kanye once said to me, ‘Adam Sandler is the ultimate fashion icon,’ and it was the best thing he ever said to me,” says Ottenberg. “I 100% agree and I wish I had the thought.”

It’s a match made in heaven, or maybe not, because there’s no heaven in Judaism—but the two get along. Ottenberg looks stellar in the sunglasses. He’s right; they fit his face stunningly. Even Rinsky, a walking comedy-show-curmudgeon agrees. “Mel’s a deli-loving New Yorker with a bagel named after him who dresses like he’s 85 but somehow still has the world itching to know what style is,” says Rinsky. “Bottom line is everyone knows that OJM is the definition of style, but they’re too blind to see it, but Mel knows exactly what it is.” Call it beshert.