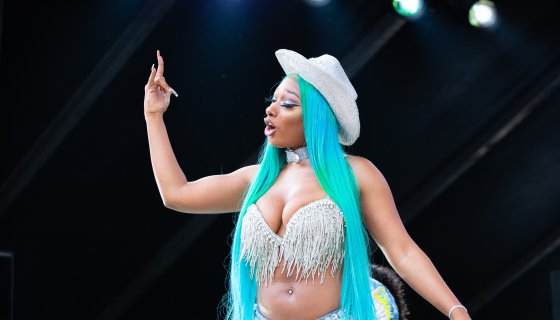 Draya decided to chime in about the , and the Hot Girl was not feeling what she had to say.

Thee Stallion didn’t find it funny when making light of her getting shot in the foot. She now isn’t feeling sharing her two cents on the situation either. During a recent episode of Van Lathan’s podcast, for whatever reason, Lathan decided to ask for her thoughts on the entire ordeal, and Draya had nothing intelligent to add.

The former reality star who once claimed her “hoeness was deleted” described Megan getting shot as being “attractive,” claiming she foresaw Megan and Tory having a Bobby and Whitney toxic love, and she is all for it.

“I predict that they had some sort of ‘Bobby and Whitney’ love that drove them down this “Snapped-esque,” and I’m here for that.”

Draya didn’t stop there, adding that she wished she had someone who was so attracted to her that he is willing to shoot her in the foot.

The clip quickly made its rounds with Twitter and the hotties dragging Draya for filth. Of course, Megan, who doesn’t miss a thing, chimed in calling Draya a “dumb b*tch” without having to name her in the tweet.

Oh, and she wasn’t done, the Houston rapper added one more tweet for good measure calling out “hoe a** n*ggas” making jokes about her traumatic situation.

Of course, there are plenty of tweets ringing off about this whole mess. Hit the gallery below to see the reactions to Megan snapping on Draya.

Meg and the hot girls when they see Draya: pic.twitter.com/0zlJeOlcl4

Megan Thee Stallion the next time she see Draya out and about: pic.twitter.com/ju7LdJPPMU

Forget what Draya said focus on Megan confirming that Tory shot her pic.twitter.com/EthdqMUQ8A

This is the same Draya who argued for the right to call her Fine Ass Girls clothing line “F*G”?

Draya is really a stupid ass stupid ass stupid ass bitch. Like girl, WHAT?!? But then again, this was the broad that left her kid alone with some Michelina microwave dinners, refused to help her kid with his homework, and displays her subpar cooking skills. Sooo.. pic.twitter.com/5k6Ok4cFBg

Draya must’ve forgot about this.. pic.twitter.com/hWRx1b7uoD

It’s really off of Draya to not only refer to Megan thee Stallion’s shooting as a “Bobby + Whitney” sort of relationship but she also glamorized domestic violence in the same breath. What a mess.

We ride at midnight hotties!! pic.twitter.com/m9NiVIHztg

Who we need to jump Meg? I’m ready to pull up pic.twitter.com/Vu5REPf4th