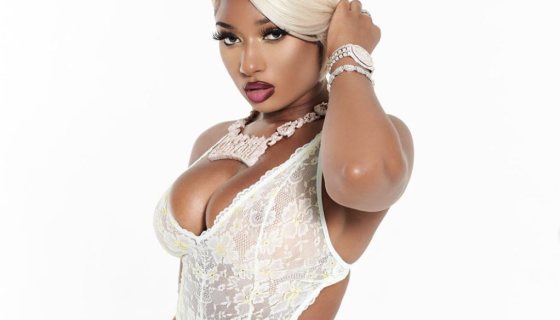 may be working hard at tightening her circle, but a few high profile celebrities including , , and have stepped up to show support.

On Wednesday (Jul 29), the “Girls in the Hood” rapper took to Instagram to share some of the love she has been receiving from the industry’s leading ladies. From flowers to cards and candy, was definitely feeling the love and more sure to take some time to let them and her fans know. Starting off the love on her own, Meg posted a picture of herself with a notebook before adding a second picture that featured three Post-it notes with three specific tasks that included “Pray”, “Take care of skin” and “write music.”

Seeing the positive outlook Rihanna was the first to reach out to the FENTY ambassador sending her flowers with a heartfelt card that read:

“Wishing you a full and speedy recovery, Meg! Just know you have a whole crew over here sending good vibes your way.”

Next up spreading the love was fellow H-town representative and entertainment icon, Beyonce, who blessed her “Savage” collaborator with a beautiful bouquet of what appears to be African Orchids and Aerangis, along with a card showing her love and support, in addition to celebrating the announcement of the two’s single selling more than 3 million records worldwide.

Not one to be outdone, Lizzo also took some time out to show her friend some love, sending the “Cash Sh*t” rapper her favorites including Lucas candies and more, which Meg gleefully showed her Instagram story, adding the caption, “Lizzo I f*cking love you.”

#PressPlay: Awwww, looks like #MeganTheeStallion is getting a lot of love! 🥰 #Lizzo

The outpouring of love comes one week after Megan Thee Stallion took to Instagram live to share an emotional and tearful update about her health. As previously reported, Tory Lanez allegedly shot Meg following a dispute in LA. Without naming the shooter, , that she was hit in both feet and required surgery.

“It’s a lot of fake reports out there, but I was actually shot in both feet and thank God the bullets touch bones, or break tendons because where the bullets hit at they missed everything but they are in there,” Megan said. “It’s not that I was protecting anybody, I just wasn’t ready to speak, that’s not something you just get on the Internet and talk about. That’s a lot of yall’s muthaf*ckin’ problem, ya’ll take your whole life to Instagram and Twitter and make it a whole diary and that’s not me.”

During the short video, the hot girl became emotional talking about her last year of fame without her mother and father to help her navigate through the foreign waters of the entertainment industry, revealing that her inability to have her family around led to her overcompensating with a large social circle.

“It’s really hard because I’m doing all of this without my dad and my mom,” Megan said, fighting back tears. “My mom was my best friend and I’m still not over losing her, so when ya’ll see me with all of my friends and all of those people around me, it was to try to fill that void of missing my parents and I see now that I have to do better at protecting myself and my peace.”

Staying true to her word, the “Realer” rapper has since taken steps to remain positive, posting her motivational efforts to Instagram, where she posted a pic of herself in a Savage lace teddy, a diamond watch and a diamond necklace that reads “Hot girl” worth $425,000, along with the caption, “Unbreakable.”