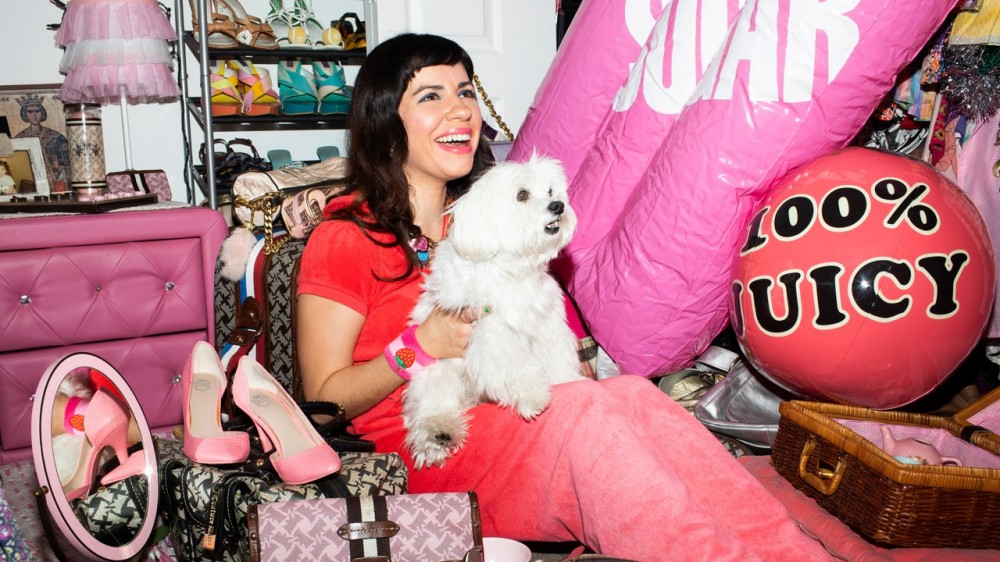 Katerina Kladis only knows of five other people who collect Juicy Couture. “Two of the people don’t collect the clothes but are into the collectibles and the luggage pieces,” says Kladis from her home in Fort Lauderdale. “I haven’t seen anybody that’s in every single category.” Except, of course, for herself. Kladis owns more than 350 pieces of Juicy Couture: dog-print (known in the Juicy Couture world as “Scotty print”) luggage, a dainty tea set, a stack of notepads, and, of course, 25 tracksuits in lime green, fuchsia, and electric blue. Her room is filled with Juicy paraphernalia: a piggy bank that reads “Choose Juicy,” photo albums in saccharine hues, and a gumball machine complete with tiny gumballs. On her nightstand, there is a Greek Orthodox icon of Jesus—Kladis’s parents are Greek—surrounded by a checkerboard, a monogrammed clutch, and a pink tennis ball holder. Kladis also has a Juicy Couture–themed pedicure with the label’s signature crown on her big toe and manicure that shows off the various prints and logos that Juicy has boasted over the years.

Kladis, a vibrant ball of energy and a dead ringer for Fran Drescher, works at her parent’s restaurant and also runs a styling and personal shopping business. She has the typical labels you’d find in any fashion collector’s archive, like Chanel and Moschino, but she has a specific, nuanced love for Juicy Couture—one of the most divisive brands of the 21st century. The label was created in 1997 by Gela Taylor and Pam Skaist-Levy, and launched the $155 tracksuits that cemented it in fashion history in 2001. The label reigned from 2001 to 2008, when it reached its peak. The luxe cushy tracksuits, which came in all the saccharine hues, were seen on the paparazzi-flanked likes of Paris Hilton, Kim Kardashian, Britney Spears, and Lindsay Lohan, who even wore an emerald-color version to a red carpet. Unlike the collectibility of labels like Gucci or Louis Vuitton, Juicy Couture was a mall brand that in an unlikely way became a status symbol.

The 33-year-old began buying Juicy in the mid-2000s during the label’s heyday. She was initially inspired by Newlyweds with Jessica Simpson, who wore Juicy suits in Kool-Aid blue terrycloth and lime green velour while perched on her couch. “I seriously loved her [Jessica Simpson] so I got introduced to it that way,” she says. “Since then, I loved everything about the brand.” She even wrote her thesis in college about Juicy Couture. “I love that Juicy was a happy brand. It had a way to make you feel happy,” she says. “You could wear a tracksuit or a tube dress out while running errands and still look supercute and cool.”

When she talks about Juicy closing, her voice shifts from bubbly to a forlorn tone. “I was definitely upset because they went to Kohl’s and got a Kohl’s line. It was a totally different experience,” she says. “Their website shut down and it was pretty sad, but that’s why I like to cherish the stuff I have. I truly love it, even till now.”

Kladis’s obsession with Juicy has to do with the joy the brand gives her. She has an encyclopedic knowledge of Juicy creations, including the Couture Couture line, an elevated incarnation of Juicy Couture that was sold at a higher price point, and its more neutral-focused line, Bird. “I feel like a true fan would really be into those lines and know about them as well,” she says. One of her most treasured pieces is a Juicy x Sephora collaboration train case from 2008, and the aforementioned Scottie print tea set that she bought online for $300. “My teacup set was so much because it has all the pieces!” she later writes.

Juicy Couture is experiencing a bit of a resurgence. The label celebrated its 25th anniversary last December. It had a relaunch featuring downtown-cool kids in a campaign with underwear label Parade, and Timothée Chalamet wore his own baby pink Juicy Couture hoodie in the October issue of GQ. The brand no longer makes its own stand-alone collections, but it has had several recent collaborations with Kappa, Apparis, and even Vetements. Kladis most appreciates when the collaboration is evocative of Juicy’s early years. She cites the label’s most recent collaboration with the underwear label Parade as a standout: “It was major vintage Juicy vibes.” She adds, “I would only buy the new collabs if I ever felt like I needed something, but in the meantime, I have enough collectible items.”

Though Kladis owns a monumental amount of Juicy Couture, she also has a trove of vintage, including Chanel, Yves Saint Laurent, and Jean Paul Gaultier. One of her other biggest collections is Moschino, inspired by Fran Drescher as Fran Fine in The Nanny, who often wore the label. “I saw this Moschino coat that has multiple different colors on it. I was like ‘Oh, the Nanny wore it?’ I loved watching The Nanny ’cause I felt like she was part of my family, like my cousin or a sister, and because she resembles me. I felt like I related to her in that way,” she says. “So I bought pieces of my own in real life and started my own Nanny collection.” As her collection grows, she’s begun renting out some of her more collectible pieces. Any requests for Juicy? Not quite yet. But Kladis thinks it will get there.