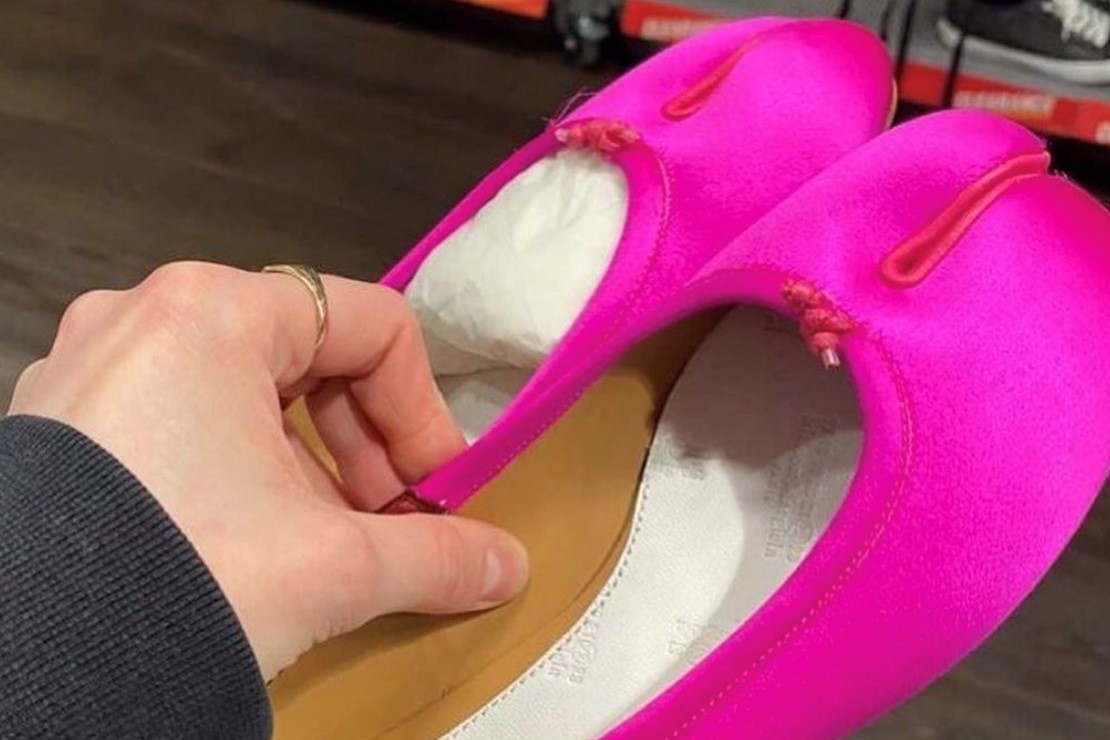 A Ben Sherman underwear set, a selection of mini-soaps, and a wine glass etched with “you can’t sip with us” – the holy trinity of bric-a-brac bargains offered up at the altar of discount retailer TK Maxx. A markdown mecca where squeaky rails wince under the weight of seasons old Superdry polos, Donna Karan bootcuts, and Sergio Tachini windbreakers.

Be it the centrepiece of a regional retail park or nestled between a Card Factory and a Holland & Barrett on an inner city high street, there is something distinctly British about the chain’s chaotic draw. The retail equivalent of daytime telly, TK is a moocher’s paradise, a perpetual Boxing Day sale, an all-season car boot fair. Yet over the past few years, beyond all the cut-price Buddha busts, frying pans, and suspect jars of relish, morsels of Gucci, Raf, and Prada have begun to surface. It’s created something of a phenomenon among those in the know, who after months of lockdown-limited shopping, are now quietly returning to sniff out the store’s unexpected treasures.

For the last year and a bit, TKFashun, a faceless Instagram account, has been spotlighting the retailer’s most golden of grails, like a bargain Banksy. “It makes me giggle when I see a brand new pair of Balenciaga thigh-high boots slung across the floor,” says the brains behind the Insta, Joseph Parker. The graduate stylist has been known to spend entire days schlepping between different TKs across London, often landing on runway pieces from the likes of Margiela, Comme des Garçons, and Dries Van Noten. “The idea of luxury is so removed there, it’s like if Prada was a Primark,” he says.

It’s unlikely that the brands themselves know their creations are being flogged alongside ceramic garden frogs and bags of himalayan salt, especially as most garments have been passed down from other retailers (with telltale labels left on the tag). And as such, the result is an accidental, if not absurd, levelling of fashion snobbery. After all, “everyone belongs in TK Maxx”. We caught up with TKFashun to chat discount diving, competitive shoppers, and his search for the elusive TK Tabi.

Let’s take it back a moment. When did TK Maxx first come into your life?

TKFashun: Oh I’ve been obsessed with TK Maxx for a little while now. I remember I used to go with my mum when I was younger but back then I always associated it with really boring stuff. Like they’d always be outside of London, so they would never have the Gold Label or anything. And then they’d be positioned next to all the other shops I’d just dread going into – Currys, B&Q, B&M – you know? It was actually somewhere I’d hate to go.

Oh how the tables have turned! When on earth did it all change?

TKFashun: Well my friend spotted a pair of Prada Sport trousers in one of the stores and that just set me off. So in I went to find all these trousers and I was like ‘oh my god I need to make an account’. Like ‘oh my god can you believe these things are here?’ Before that I had actually never been into a London TK Maxx but I was constantly buying stuff online, trying to get things at a cheaper price, because I’m a stylist in real life. I guess I just wanted to share the kind of pieces I’ve become obsessed with. People message me like, who is this? And they think it’s all top secret, but it really isn’t.

I have to say most of the things I’ve found in TK Maxx have been pretty questionable.

TKFashun: Yeah that’s the thing. You see with the account I feel like everyone’s little personal shopper. I even used to write ‘I make my arms ache so you don’t have to’ in the bio. But it’s like a whole day out for me. Like, I don’t just go to one store. I literally go from East London and go all the way West. From Stratford all the way to Hammersmith. One day – and this was when I got really obsessed – I went to every single store in London. I was out from 10am to 8pm. People must think I’m a bit mad really but that’s the fun of it.

It’s only been two weeks since non-essential retail has opened back up. How many times have you been to TK since then?

TKFashun: I have been in quite a lot actually. Because, you know, the Instagram account lost out on so much while the stores have been closed. So I went on the first day that lockdown was lifted. I was like ‘right TK Maxx is round the corner, let’s go’ – I literally went on my lunch break. Since then I’d say I’ve been every other day. I always get a bit of a mixed reception when people find out. I’ve had some friends just be like ‘omg is that you behind that account… why are you doing that?’

It’s all worth it when you find that golden nugget, though, right? What’s the best thing you’ve found on your travels?

TKFashun: Just things you’d never expect to see at an outlet store, really. This one time I found a pair of £1000 Gucci earrings, which I know are still spenny, but it’s just like damn. Sometimes you can grab a bargain, though. Like the other day I found a Balenciaga hoodie for £199, which would usually retail for at least £700. The best thing I’ve ever found was probably this leather Celine belt-skirt for £90. I bought that one and resold it for £800. There was also a pair of boots from Alyx that I got for £250 and I think I ended up selling those for like £1000. But yeah the best store is Kensington for sure. I think I actually found an Hermès necklace there once. Oh god yeah, that was another good find.

It must get pretty competitive if someone else is also looking for the best deal?

TKFashun: Yeah there’s been a few occasions when I’ve been eyeing something up and I can feel someone looking at me like ‘don’t you fucking touch that pair of trousers’. So there’s definitely that level of competitiveness. But I dive straight in and don’t let anyone get in my way. If I’m going in, I’ll run straight to the right spots and I make sure that I take a couple of baskets with me, too. Honestly, I try not to post the things I want to buy and that’s just purely because I do a lot of reselling. There’s actually even better stuff in there than whatever I post. The thing is, it’s become very saturated, a lot of people have started to come in and buy all the good stuff. You have to get in at the right time.

You just cannot tear the British public away from their bargains!

TKFashun: So I come from Stoke on Trent which is like a really rough, dead end city. There’s no employment, there’s nothing. But I was home once and found a load of Balenciaga shirts in the TK Maxx there. Everyone loves to feel fancy every now and again, do you know what I mean? I think if you can do that knowing you’ve spent less, then it makes you feel even better. I get so much satisfaction from telling people something’s from TK because no one ever expects it.

What are you gagging to find?

TKFashun: Probably just new designers. I’ve seen a few pieces from Marine Serre. There was some Art School there one time, too. There’s quite a lot of streetwear but I’d like to find more brands that cater to my personal style. I’ve been dying to find a pair of classic Tabis  – I’ve only found a pair of the sandals and pink ballet flats.

There is something hilarious about seeing these designer pieces recontextualised in such an unexotic setting. Why do you think TKFashun has resonated with so many people?

TKFashun: The original retail spaces differ so much  – it’s like if Prada was a Primark. It’s interesting to me as someone who cannot afford the original retail prices of these pieces, though. It makes me giggle when I see a brand new pair of Balenciaga thigh-high boots slung across the floor. The pressure of luxury shopping has been removed. You don’t feel watched or like you don’t belong. Everyone belongs in TKMaxx.

“If I know that I’m going somewhere, I’m always checking to see if there’s a TK Maxx nearby. Dread to think how many hours I’ve spent in those bloody stores” – TKFashun

It’s a humorous account and I’ve found a bit of a community there. The regulars that come onto the page are all really interested. There’s a lecturer at one of the fashion universities who is just constantly messaging. I do find it weird how a lot more people seem to appreciate this page than my actual styling work. It’s just funny because there are people I’m obsessed with who don’t follow my normal profile but come onto TKFashun and wanna be my best friend, like other stylists that I look up to and people who work at publications that I’d love to have my work published in.

What are your plans for TKFashun, then? I hear TK Maxx is pretty big in America…

TKFashun: Oh absolutely and I’m in there straight away. If I know that I’m going somewhere, I’m always checking to see if there’s a TK Maxx nearby. Dread to think how many hours I’ve spent in those bloody stores. I’ve just graduated from university so I guess I just want to keep building it up and see where it goes. It’s quite tough out there. After uni I did have a few opportunities but everything was called off because of COVID so I just want to see how far TKFashun goes. It’s a bit of a weird one, I just started for lols and now I’ve got people loving it, so let’s see.