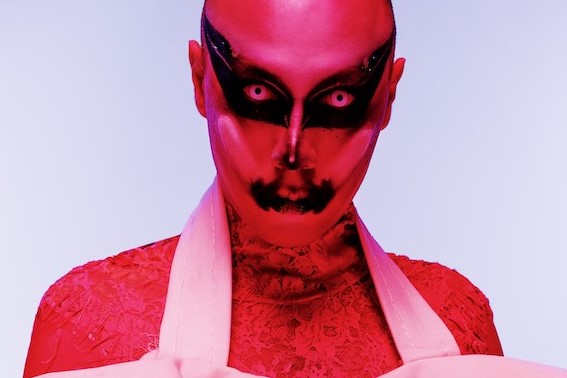 Thanks to shows like RuPaul’s Drag Race, drag is a worldwide phenomenon. Serving up looks, drama, creativity, and community – and sometimes even cutting-edge takes on gender – the series has carved out a place for drag in mainstream pop culture and made superstars of the queens who grace its stage. This isn’t the case for drag artists everywhere, however. In certain countries, drag remains underground, thanks to less-than-progressive societies that continue to oppress the LGBTQ+ community – though that’s not stopping a new generation of drag stars from exploring their identity and continuing to shine in the most unapologetic of ways.

One queen doing just this is pioneer of the Russian drag scene Lorina Rey, The Moscow-based queen’s esoteric drag is hard to pin down, as she shifts from 80s-style horror diva, to latex-clad alien, to butch icon in a double-breasted suit. Whether wearing a state-of-the-art bodysuit constructed from layers of pink tulle or a larger-than-life inflatable magenta dress, Lorina is always recognisable for her dramatic eyelashes, long claws, and bald head, as part of a fluid look that falls somewhere in the space between the gender binary. It’s drag for the modern era – collaborative and shapeshifting, and always with the aim of pushing the boundaries of the art form – often created by his partner, designer Alexey Golubev.

While drag in contemporary Russia is in a very precarious state, performances are taking place in gay clubs in almost every city, and Russian drag is thriving online. Artists like Lorina are keen to bring their practice to a wider audience as they explore gender and use their art as a radical weapon of queer self-expression. Not only are they seeking to entertain and engage, but manifest real change within their prejudiced society. Russian drag is ready to step out of the underground and into the spotlight like never before – and Lorina is one of its most visible and outspoken figures.

Here, we get to know her a little better, as she opens up about Moscow’s queer scene, the role of social media in her creativity, and the future of Russian drag.

Hey Lorina! First question: how did you discover drag?

Lorina Rey: I was born in a small town in southern Russia which only had one gay club. Once I ended up at a drag show – back then I didn’t know what drag was. The show wasn’t experimental and I can’t say I loved it, but I was intrigued. Before, I worked as a hair stylist and go-go danced in clubs, although I didn’t have any make-up skills then. I started watching drag tutorials on YouTube and trying out looks, watching RuPaul, and studying the history of drag.

How did the character of Lorina come to life and how would you describe her?

Lorina Rey: I can’t say that Lorina is a character – Lorina is me, or maybe a different part of me, which is more outspoken and outrageous than my daily self. Lorina is confident, mysterious, and a little private. A lot of people are scared of her, but if she lets you in, one can see kindness, care, and generosity. She has incredible power. During the drag transformation, it feels as if I’m possessed. Sometimes I feel unwell before the performance and can barely move – and then end up doing splits on stage like there is no tomorrow. My drag is the expression of my inner state.

How long have you been doing drag? How has your drag changed over the years, and what are the things you’ve learnt on the journey?

Lorina Rey: I started doing drag about eight years ago, but in the last five it’s been integral to my life. In the beginning, I looked like most queens, with a wig and fake tits, but even then I was looking for ways to explore less conventional drag. Most Russian drag queens perform to Russian pop music, and I preferred Róisín Murphy or MNDR which didn’t get a lot of appreciation. Then I met my boyfriend and we started collaborating.

“During my drag transformation, it feels as if I’m possessed. Sometimes I feel unwell before the performance and can barely move – and then end up doing splits on stage like there is no tomorrow. My drag is the expression of my inner state” – Lorina Rey

After we moved to Moscow from our small town, we were struggling, and Lorina disappeared for two years. I then performed for a short period in a big Moscow club in a programme called Drag University, but it was so badly paid that it was barely enough for a taxi. When I quit the club, Russian drag on Instagram was only just emerging, but together with my boyfriend we have decided to put emphasis on social media and collaborations with artists and photographers. We started experimenting mixing feminine and masculine, cosmic and otherworldly, and I quit wearing wigs. On my drag journey, I realised that you have to always listen to yourself and not others, and know your worth.

What do you love most about drag?

Lorina Rey: I love the process of creating a persona and a certain make-up look. It’s magic, a ritual. I never plan make-up in advance, so every time it’s a surprise. I love collaborating with photographers and designers who have their own perspective on my look. I love performing on stage. Beforehand, I am always nervous, but in the moment it’s like an explosion, being possessed by an unruly energy.

What is the most difficult thing in being a drag artist in Russia?

Lorina Rey: If you want to look good, it demands a lot of resources. It’s very costly, and this is one of the most complex things about drag in Russia, as here brands very rarely sponsor anyone. It’s very hard to make drag sustainable if you’re not performing every day. Unfortunately, not everyone understands that drag takes a lot of effort – physically, mentally, and financially. Being on the street in drag is not always safe, so one has to invent particular ways to move around town if you have to appear at an event already in drag. Aggression and lack of understanding from people is also a difficult issue.

Could you tell a little bit about the collaboration with your partner Alexey Golubev who makes Lorina’s outfits? How do you usually work together?

Lorina Rey: We’ve been together for almost seven years. We met when Alexey came back to our native small town in Russia while studying fashion design in Belgium. When we met, I cautiously admitted that I was a drag queen, and he gave me a golden jacket he was making for himself – we’ve been inseparable since. When I started doing drag in Moscow, we realised that the city didn’t have that many designers who create clothes which suit our vision, so he started making outfits for me. His creations are always very detailed, almost Haute Couture works of art. Usually he makes the outfit, I work on make-up, and we sometimes make videos, like this one titled Jealousy which was inspired by horror classics Carrie and Psycho.

What are your biggest drag influences and inspirations?

Lorina Rey: I always try to drag my way, but I love artists who pay attention to detail, like Hungry and Dshock. I love French artists The Arseniek, Le Menestrel, and Kam Hugh. And when it comes to RuPaul’s Drag Race queens, it’s Sasha Velour and Bimini. But I have to admit, I’m most inspired by working with my boyfriend.

How would you describe the Russian drag scene to someone who has never been? Is drag very underground there?

Lorina Rey: The drag scene is very disjointed, just like Russian society. There is an older generation that is not keen on change – and there is a younger, fierce, and open generation that wants to be different. Drag is also divided into people who perform in clubs and those who mostly exist on social media and organise their own parties.

The biggest number of drag artists are based in the biggest cities, Moscow and Saint Petersburg. In these cities there are more gay clubs and more opportunities for performances and self-expression. In smaller towns there are lots of drag artists too, but they often express themselves mostly at home, because there are not many places to go in drag, and there is more threat of aggression from people.

“The drag scene (in Russia) is very disjointed, just like Russian society. There is an older generation that is not keen on change – and there is a younger, fierce, and open generation that wants to be different” – Lorina Rey

We also have Dragzina, a zine about Russian drag edited by my friend Masha Vorslav and first published in December 2020. I was part of the team, and we also run Dragzina parties together. Thanks to these parties drag becomes interesting for people beyond LGBTQ+. Drag is still very underground, and the mainstream is not aware of it because of the ‘gay propaganda law’. But generally, drag in Russia is a bit of its own world – even LGBTQ+ community is not always supportive. More masculine gays are often judgemental of drag artists, which might be a sign of internalised homophobia.

Are Instagram and other online tools important for your drag and self-expression?

Lorina Rey: Definitely – in the same way as they are for all contemporary artists! For me, the best thing about social media is collaborating with other creatives. At some point, my TikTok generated a lot of hate, but I always tried to engage with the haters as well, trying to explain to them that make-up is not a reason to wish death upon me. Some haters even become appreciative of what I do with time!

What are your goals and dreams for the near future?

Lorina Rey: I would love to travel the world and represent Russia at Prides to show that our country has drag too. I think big! I would also love to have a digital show, and want Lorina to star in a horror or a thriller, in the style of Brian De Palma’s Dressed to Kill.