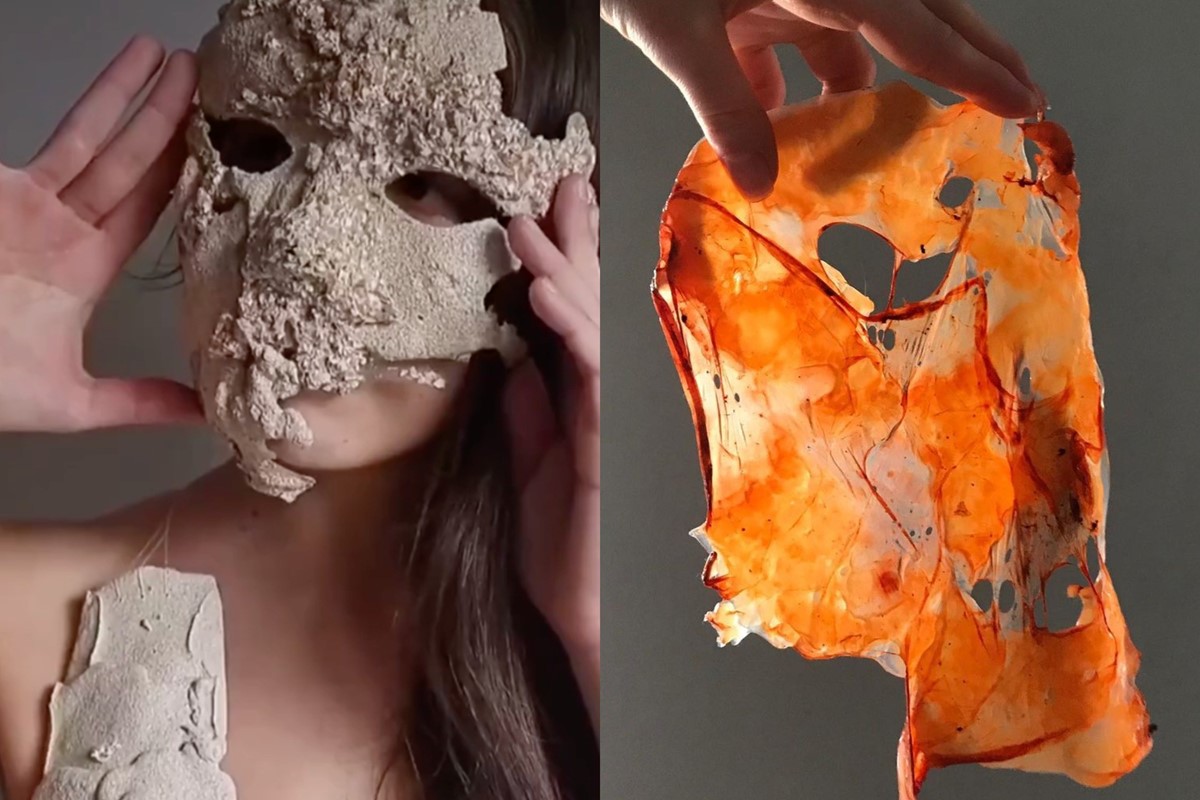 These intrepid teens are at the forefront of material innovation, forging bio-ateliers from bacteria, food waste, and fungi

In a double speed clip, Simone Lawler paints her friend’s back pink. Seconds later she’s peeling it off and covering it in what looks like chopped up mushrooms, before wrapping the whole thing up in clingfilm. To the uninitiated, it looks like one those unhinged clickbait ‘hack’ videos that goes precisely nowhere, but Lawler is one of many taking to the platform to document their cultivation of biomaterials. It’s a broad term that can mean many things, but in the case of TikTok’s DIY-ers it’s all about cultivating fabrics from natural, plant-based materials.

“I got really interested in fungi and its role within nature,” says 23-year-old Lawler, explaining that her interest stemmed from an unlikely source: a Joe Rogan podcast. Rogan’s interview with mycologist (fungi biologist) Paul Stamets sent her “down the rabbit hole” of research and saw her investigating fungi through her own experiments – which is how she found herself making a mycelium corset and posting it on TikTok.

Mycelium is in essence the root system of mushrooms, and its growth can be harnessed to create anything from plant pots and packaging to corsets. “A lot of fashion projects are looking at inspiration for aesthetic purposes but I wanted to use (fungi) to combat some of the issues surrounding fashion, like waste and non-biodegradable materials,” says Lawler, who just graduated from the University of West London and landed at Central Saint Martins to undertake an MA in biodesign in September.

Narrating each step of the process as she goes, Lawler has also made materials from orange and carrot peel, apple skins, and pineapple leaves. “I wanted to see if other people are interested in it and kind of build a community around it,” she says. “I’ve had such positive feedback. People have reached out to me because they’re also interested in it and want to practice it, and people at unis are sharing their research with me. It’s been great to network with a range of different people and just exchange ideas.”

While Lawler takes a tutorial-like approach, Sofia Perales, who goes by the handle @mat_wise, posts videos with a more performative quality. “I consider myself an amateur in art direction,” she says. “I make sure that all this content makes people feel something. I want it to reach their senses, to evoke aesthetic appeal while giving information about the creation process or (the material’s) use.”

The crunches and splashes of manufacturing intertwine with soothing classical music as she dresses up in armour-like moulds, and lifts self-made dumbbells at the gym. Working mainly with eggshells, the 26-year-old material designer says the creations are the result of research via design. “I consider myself to be a methodical, fair, pragmatic, and artistic designer with the purpose of contributing to a more sustainable way of living,” Perales says. “My inspiration comes from the idea of making things in a way that’s more loyal to the earth.”

“All my work is based around the climate emergency essentially, because I want to inspire people through using nature as part of my work to live a more symbiotic life with their environment” – Manon Wilson

By focusing on food waste like eggshell, Perales aims to “contribute to a more sustainable cultural practice.” “It promotes a paradigm shift by demonstrating that organic waste can act as an alternative asset to product objects. Excessive food waste is prevented from ending up in landfills and put back into the cyclic process, giving it a chance to be harnessed for product design,” she says, adding that it follows the cradle-to-cradle model as it will nourish the soil as a fertiliser at the end of its useful life, rather than polluting the environment like many man-made materials do.

A seemingly complicated topic on the surface, the cultivation of biomaterials has been simplified and opened up to a new audience thanks to TikTok makers. “All my work is based around the climate emergency essentially, because I want to inspire people through using nature as part of my work to live a more symbiotic life with their environment,” says 19-year-old Manon Wilson, another fashion creative who’s taken to the platform to share the results of their experiments.

Alarmed by the sudden proliferation of single-use masks due to COVID, she decided to make a compostable mask out of kombucha leather. The technique makes use of the skin that forms during the fermentation of kombucha. Called a SCOBY, an acronym for ‘symbiotic culture of bacteria and yeast’ (sounds delicious…), it’s usually classed as a waste product or used to make more kombucha, but Wilson and other TikTok makers are drying it and processing it to use as a biomaterial. “You get this material which is really cool, flexible, and it’s really durable as well. It feels like leather,” she says.

Wilson used her biomaterial experiments as the basis of a portfolio to help with her application to CSM as she couldn’t afford to undertake the foundation course which they usually require students to do. It worked; the prestigious school accepted her, and she enrolled in September.

Others do it for the pure fun of playing around with a new material, which sits somewhere between gross and engrossing, and undoubtedly ticks the box for premium ASMR content as evidenced by The Tech Interactive’s oddly calming making-of video. @sugarandsliime shows off a gloopy circle of bacterial cellulose material dyed blue with spirulina, while @syllyvava scrunches and unfolds their SCOBY leather purse, which looks disturbingly similar to the human skin-bound spellbook from Hocus Pocus. Sticking with the horror theme, Rachel Britton (@racbripho) dries out huge circles of kombucha leather in the sun and uses the skin-like results to make hacked apart and sewn back together Halloween masks.

However, playing around with giant sheets of gloop and mixing up your own fabrics from blended orange peel or mycelium has potential beyond being a fun pastime, it’s looking more and more like the future of fashion. “Animal agriculture has a meaningful impact on land use, water consumption and of course greenhouse gas emissions,” says Gavin McIntyre, co-founder of Ecovative Design, a biotechnology company that produces mycelium-based products including foam and packaging. “We’re able to grow mycelium over a matter of days, as opposed to the six months plus it takes to ‘grow’ an animal.”

“This isn’t just something that’ll break down in the environment, it really amends the environment, naturally rich in nitrogen, which all proteins need to grow” – Gavin McIntyre, co-founder of Ecovative Design

The company, which has recently added textiles to its portfolio working on capsule collections of footwear, handbags and accessories, has undertaken a life cycle assessment of its foam, and found that it emits around an eighth of the greenhouse gas emissions as a conventional plastic foam, and has a tenth of the embodied energy.

In addition, mycelium products – much like Perales’ eggshell creations – give back to nature at the end of their lifecycle, whereas plastics continue to exist within the environment for thousands of years. “It’s not just something that’ll break down in the environment, it really amends the environment, naturally rich in nitrogen, which all proteins need to grow.”

Ecovative is currently scaling up its technology, creating enormous slabs of mycelium of around 1.8 by 20 metres, which will make it easier to bring the material to market at a wider scale. A material that is breathable, lightweight, hydrophobic, and with the potential to be grown in specific colours, it holds huge potential. So the novice makers and DIYers of TikTok may look like they’re just playing around with tea and veg waste but they now find themselves at the forefront of a significant shift in fashion and textiles.