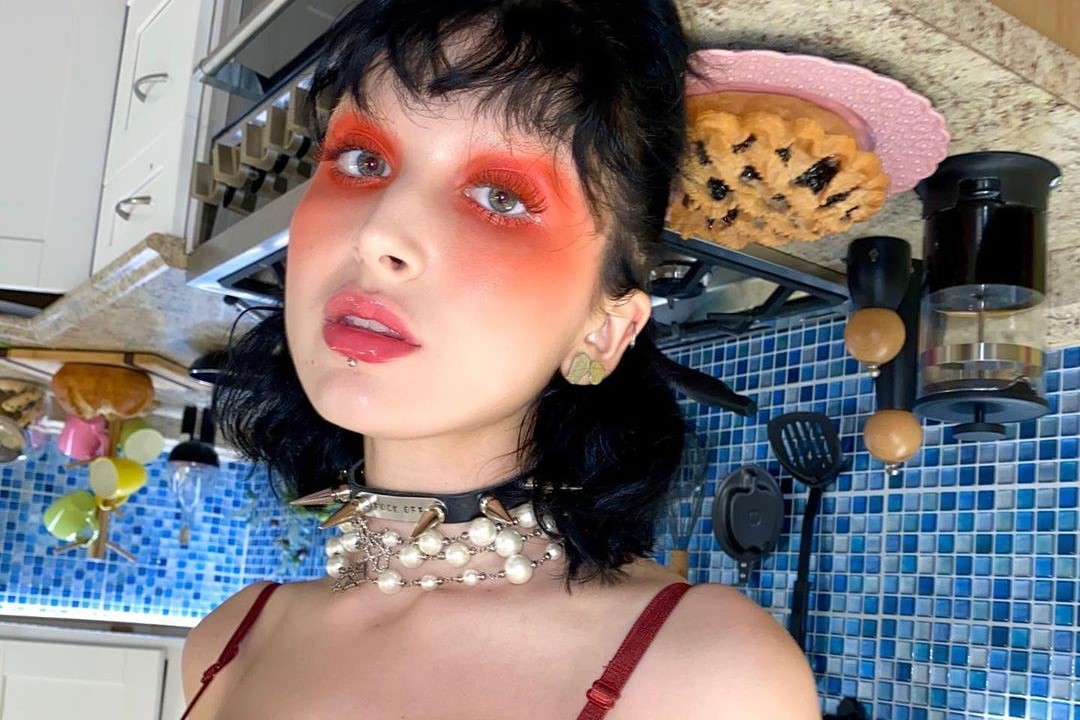 Maybe you’ve spent too long scrolling through the cutesy cottagecorers, dark academia fanatics, and full-blown e-girls that make up TikTok’s vast community, but you’re thinking about changing your look. Doing so, however, takes time, patience, and dedication. Whether you’re trawling the depths of Depop, where sellers have long held a unique ability to recognise a trend with lightning speed and jack up their prices accordingly, or heading out shopping IRL, ‘style inspo’ Pinterest board pulled up on your phone, it’s unlikely that the transformation you’re envisaging will be instantaneous – unless, that is, you know exactly where to look.

Step in Bella McFadden. Known across social media as Internet Girl, LA-based McFadden’s endless stream of 90s and early 00s-inspired fashion content, personal style posts, and YouTube series Trashion has amassed her a cult following and celebrity status among alt-teens worldwide. What she’s probably best known for, however, are her bespoke iGirl bundles – which comprise a series of garments, thrifted and styled up by McFadden, and sold via her Depop store. Essentially, it’s a personalised, head-to-toe outfit that offers her customers a ready-made new look they’ll love, without the need to dig through secondhand and thrift store sale racks themselves. Looking to become a 90s mall rat or Y2K goth brat? McFadden is your go-to.

Having been an avid thrifter since her early teens, McFadden was among the first vintage sellers Depop reached out to when it launched back in 2016, thanks to her impressive following and hype-creating IG imagery. Initially, she started listing pieces straight out of her own wardrobe, with the premise of eventually moving into designing her own garments, but what would come to be known as the iGirl bundle quickly took over. “I was basically styling these head-to-toe fits for people on the internet, styling the vintage I was listing on my Depop and advertising as a whole outfit,” she explains over Google Hangout. “Suddenly I was like ‘oh my gosh!’ I could make it a whole custom thing where they can give me their measurements and I can style them from head to toe’, which is how the concept came about.”

In the time since, scoring an iGirl bundle has become an alt-girl rite of passage and a way for wannabe social media stars to grow their own following. Having readily admitted to binge-watching countless other unboxing videos beforehand, they in turn unveil their just-arrived, ready-made hauls via their own YouTube channels, pulling out throwback gems from brands like Tripp NYC, Hello Kitty, and Guess (among a whole bunch of more obscure names), and racking up thousands of views in the process. For them, the iGirl bundle has become a status symbol and an almost certain way to secure even a small community of fans.

Now, McFadden’s iGirl bundles are so popular, she’s had to change the way she works. “I used to just accept unlimited requests, I would just have listings available and was like ‘go off everyone!’ but I’d wake up in the morning like… ‘I sold like 60 bundles last night!’,” she explains. “Obviously that wasn’t right – I was working 16 hour days, I couldn’t sleep at night because I was thinking about how many bundles I had to do, and my life was crazy. It was not a sustainable way to be living, but you live and you learn, and now I know how to go about it all.” The process has since been refined, with customers picking their aesthetic theme (“it can be cottagecore, or 90s baddie, or Y2K mall rat”) and handing over their measurements. “We ask them to let us know any questions they have through Depop DM, they give us all their social handles and we’ll go through their Tumblr and Pinterest boards so we really get to know them. We also write them a personalised letter in each bundle.”

Personal stylists and shoppers are, largely, only accessible to wealthy clients, but McFadden’s service is not only democratising access to fashion services out of the grasp of many young Gen Zers, but also showing a more non-traditional route into the profession. Hoping to be a stylist herself, Lily Jackson from the UK was interested in experiencing what it would be like to be styled by someone she considers a fashion icon ‘without having to pay the extortionate fees a typical ‘celebrity’ stylist charges’. Crossing her fingers for a few recognisably ‘good’ brands when she signed up to receive her own bundle, Jackson was ‘beyond happy’ with the selection. “Bella perfectly embodied the 90s Delia’s Catalogue vibes I had asked for, with multiple outfit choices along with accessories. I received multiple ‘Guess’ branded items, a few vintage pieces, and loads of extras. The experience itself was totally worth paying for.”

The fee for the iGirl bundle works out at around $150 (or $200 with UK shipping), meaning that they may be more feasible than hiring a personal stylist IRL, but they’re by no means cheap. With many claiming Depop has become gentrified by those selling on inexpensive, thrifted clothing for severely inflated prices, McFadden points to the many different elements that go into what she does – from the hours spent actually trawling the rails, piecing together the bundles themselves, and getting them ready to go in the mail, to setting up her studio, taking photographs, and filming and editing her videos. What many may not realise is just how much work goes on behind the scenes.

For some, however, the iGirl bundle’s appeal doesn’t necessarily lie in the clothes their arrivals contain. With traffic from McFadden’s fans and prospective customers having a nosy at what they could be receiving, the unboxing videos themselves can amount to tens of thousands of views (with Jackson’s currently standing at 42.6k) – huge numbers for those just getting started in their quest to become a social media star. Those dropping their cash on the bundles aren’t afraid to own up to this thought process, using it to justify what, to them, is a high market price. “I admit that I took this into consideration whilst purchasing my iGirl bundle,” confirms Jackson. “Mainly to assure myself that spending more than I could really afford was completely worth it.”

The bundles are now beginning to take over Depop as others adopt McFadden’s methods, becoming a trend in themselves. The OG isn’t phased by this, however, citing it as ‘part of the process’. “I love what the bundle has done for me and the Depop community and a lot of people have started to do them now, which I think is awesome,” she confirms. Most are happy to credit McFadden as their inspiration – just take Depop duo Anya and Nora, owners of Blue Cow Vintage, for example. “We’ve taken inspiration from her in a few different places for sure, one being the styled bundles. She has a lot of fun ideas and definitely knows how to run a business well, so we’ve taken pointers. Our favourite thing about making bundles is being able to work with our customers in a much closer way than we could otherwise.”

In fact, McFadden explains she’s happy to hand the baton over to a new gen of cyber stylists, and turn her attention to other challenges. “We’re already steering away from them a little bit,” she confirms. Instead, she’s switching her focus to her blossoming line of sustainably sourced clothes and iGirl jewellery, as well as more charity-orientated work. “But I’ll love and respect them forever,” she concludes.