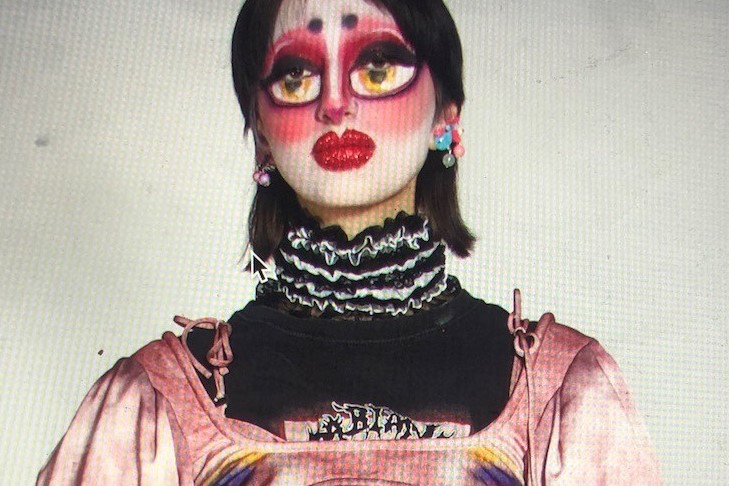 Spooky season might be a fleeting moment for most of us, as we pack our costumes and wigs away in the back of the wardrobe and turf our decomposing pumpkin lanterns in the trash as quickly as we carved them, but for Fabian Kis-Juhasz, Halloween is life.

Drawing inspiration from Barbara Creed and Julia Kristeva’s explorations of the horror genre, the former RCA student’s work centres around the concept of ‘the monstrous feminine’ – often in the most literal sense. On the line-up within Kis-Juhasz’s SS21 collection are Jack O’Lantern-inspired tunics, cutesy, Rosemary’s Baby-esque smocks, 18th century bloomers, and the kind of semi-sheer, inky-black and midnight blue dresses teen goths everywhere would literally fight you for. Subtle it is not: but it is extremely fun.

Taking its name from actress Kim Richards, who starred in Disney classic Escape to Witch Mountain, the offering makes its debut by way of a surreal short. Created in collaboration with Dazed 100-er Agusta Yr, the film sees Kis-Juhasz’s creepy, kooky clothing digitally rendered on 3D models, who make their way through a trippy, transforming environment – contorting their bodies in such a way that would make Margiela icon Leon Dame proud.

In celebration of its release, we sat down with Kis-Juhasz and Yr to talk socially-distanced Halloween plans, finding inspiration in unlikely places, and their best-ever fancy dress costumes.

Where do you find inspiration, and what was the inspiration behind this particular collection?

Fabian Kis-Juhasz: The work of Barbara Creed and Julia Kristeva had a huge impact on me and they’re sort of the backbone of most of my projects. With this one, I wasn’t specifically referencing anything from that realm but it’s always a lingering theme. I love the idea of ‘the abject body’ and it’s something I think about a lot in terms of the actual garments I make. I love historic shapewear and the idea of subverting its original purpose by incorporating elements into them that resemble bodily features like sagging breasts and sunken rib cages – features that go against the concept of a ‘desirable’ silhouette.

This collection was called Kim Richards because I feel like the idea of her really encompasses the previously mentioned themes of femininity and performativity, but also speaks to the lighthearted and campy sensibility of the video I created with Agusta. I’m kind of obsessed with her to be honest – she’s such a genuine and multi-faceted person, a truly eclectic woman. I don’t think there are enough people designing for eclectic women.

Tell me about how and why you and Agusta came together for this, what do you like about each other’s work?

Fabian Kis-Juhasz: Agu and I have been very close friends for a while now – I always wanted to work with her on something, so I was just waiting for an opportunity to present itself. My work always had something inherently campy and silly about it, but it was never a conscious thing, Agu on the other hand is fully aware of the humour she put into her work and that’s what makes it so great!

What was the idea behind the film?

Fabian Kis-Juhasz: Our original concept was to film a digital catwalk show of sorts at a pumpkin patch at a farm! Unfortunately the pumpkins weren’t ripe enough in time to meet our deadline so we had to abandon that and things evolved from there organically. We definitely wanted to lean into the funny and stupid aspect of our work and than have a gradient from there into something more sinister and grotesque. Layering different camera qualities and mediums was something we discussed from the beginning so as Agusta was shooting our main footage and doing the 3D scans I was filming b-roll on a VHS camera.

Agusta Yr: We wanted to blend my 3D style and overlay with VHS footage to implement the softer style of Fabian’s work. There’s definitely a common thread in our works, so I think we were just both acknowledging that and being mindful of each other’s take on the subject.

Fabian, could you talk me through some of the key pieces within the Kim Richards collection?

Fabian Kis-Juhasz: The molded corset piece is a concept I’ve been working on since the RCA. This time around I actually obtained some original 18th century corset patterns and started draping with those, incorporating my shapes into the patterns. I wanted to create something with a strong commercial edge and that’s how the shirred technique I used for the turtlenecks and bloomers came about. To me it has the right balance of simplicity and ingenuity. The big ball gown at the end took about three weeks to make. I think I spent about a week alone on hand pleating and sewing the top layer.

What’s the best thing you’ve ever dressed us as for Halloween?

Agusta Yr: It probably has to be when I dressed up as Baby Spice when I was four, and then again a few years ago. To be honest, the costume when I was four was actually the better one.

Fabian Kis-Juhasz: A couple of years ago I went as Baby Jane Hudson from What Ever Happened to Baby Jane. It was the first time I didn’t try to negotiate my costume into looking cute or sexy, I just fully leaned into the demented old woman aesthetic and I looked terrifying. It was very liberating!

And what do you each think the other should go as this year?

Fabian Kis-Juhasz: I’ve been telling Agusta for weeks now that she should go as Christina Ricci from Buffalo 66. It’s literally her but with more eyeshadow!

Last question: how are you celebrating the holiday this year?

Fabian Kis-Juhasz: With COVID and us being in tier two it’s quite hard, but we’re thinking about maybe doing a little socially-distanced daytime picnic at Tower Hamlets Cemetery. I don’t think I can do a Zoom Halloween party – too much PTSD from lockdown. Halloween also falls on a full moon this year, so I would definitely love to do something witchy!