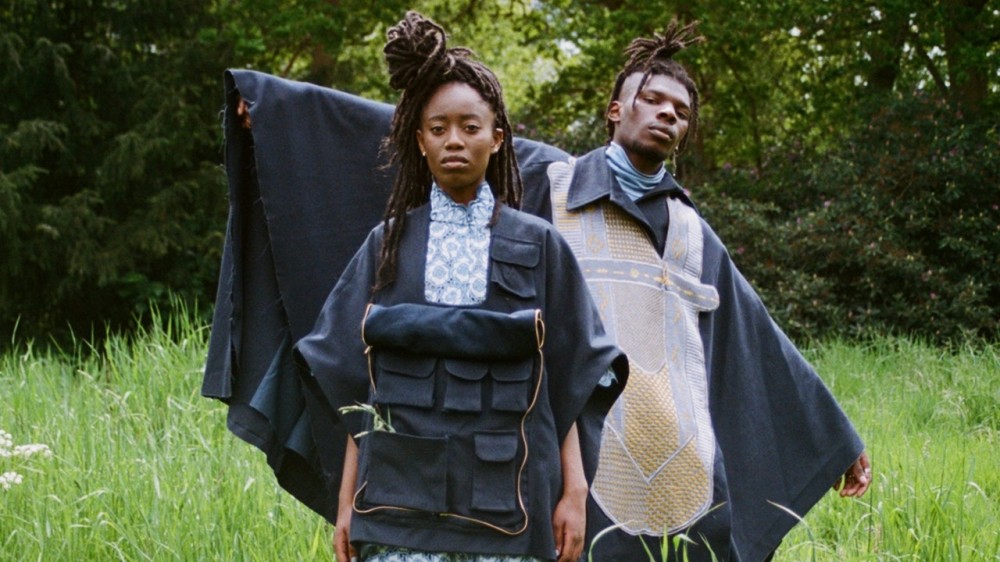 In this tumultuous year for fashion graduates, Joy Julius just made history in the UK. The Nigerian-Swiss Kingston University designer is the first winner of the Black Excellence Prize, the first specific honorific for a Black graduate to have been instituted in London’s Graduate Fashion Week’s 30 year history.

The inaugural award is the first public result of the fast-moving Black-led university teacher network Fashion Academics Creating Equality (FACE), which came together last summer. Fired both by the eruption against systemic racism and the long-suppressed issues of discrimination that they experienced and witnessed within education, the educators spelled out their main aims boldly and plainly on their website: “The goal of FACE is to embed culture and diverse perspectives into the curriculum. FACE demands acknowledgement of the contribution of Black culture and creativity to history, society, and fashion.”

To Joy Julius, the effect of just hearing about the Black Excellence Prize felt life-changing. “I was happy, because there were only three people of color in our year at Uni. We were doing very cultural things with our collections, and mine was so personal and traditional to my experience,” she said. “And I realized, wow, this is a great opportunity for us, because the judges are going to understand.”

Edging out almost 100 other applicants from all over the country, Julius was awarded for her accomplished non-gendered collection, which became powered with meaning in the dark days of 2020. “It was my response to the #EndSARS movement in Nigeria,” she explained. “It was a hard time, because there were people protesting in the streets, and my brothers and sisters were there. They weren’t demonstrating, but they were scared—and I felt I was just here at Uni, posting about it, talking about it. My thoughts were there constantly, and at the same time I was making my collection. So I thought, what is the outlet for me in all of this?”

Last October, social media drove awareness and solidarity when the Nigerian Police Special Anti-Robbery Squad (SARS) fired on peaceful, unarmed citizen protestors at Lekki toll gate in Lagos. “What got my attention was a photograph of a lady—I don’t know if she’s been identified—who was wearing a long, drapey, blue hijab dress in the forefront of the protests,” says Julius. “She was wearing really traditional clothing. I just imagined what I could to gear her up to protect her against the police. Because they were not protected. They were just being shot at.I was feeling overwhelmed, but I didn’t want a violent response. That came through the collection and my photoshoot, with models holding flowers as a weapon.”

Julius synthesized the indelible signifiers of the Black Panther movement with Nigerian dress, treating and softening her recycled textiles with Nigerian tie-dye and Adire indigo techniques during the long weeks of lockdown. “I’d looked at Nigerian Agbada traditional robes for men, with their embroidery, drape, and big volume. I started with that silhouette, and then began researching military gear, body vests, and utility wear,” she said. “Something to give power to the people.”

Benita Odogwu-Atkinson, Senior Lecturer at the University for the Creative Arts and a co-founding member of FACE, presented Julius with her award at a live-streamed ceremony. She said the graduates’ work spoke volumes to the judges about the connections Black and Brown students are making in response to the events they’re living through.“Generally, from the point of view of a political stance, you see students talking about the government that you’re not happy with. I felt that Joy’s work captured all the issues going on around the world, where the police are becoming a front for governments—from Black Lives Matter to other contexts.”

FACE members commented collectively on the richness and depth of the graduates’ entries: “We were thrilled with the results. The range of skill-sets, agendas, and creative exploration on display has been inspirational. Our young creatives stretch out through their own cultural, emotional, and political landscapes; this is what visibility looks like.”

The network began with an Instagram call-out to colleagues of color from Andrew Ibi, Programme Leader in fashion design and communication at Liverpool John Moores University, which was instantly picked up by Pascal Matthias, Senior Teaching Fellow in fashion marketing and management at Southampton University. That the two Black senior fashion educators didn’t know each other had nothing to do with the far-flung geographical locations of their campuses; it was the isolation and disconnection that they, and all teaching staff of color, had been living through for years within the overwhelmingly white hierarchies of British academia.

Last year, a national headcount conducted by the Higher Education Statistics Agency revealed, shockingly, that less than 1% of professors in UK universities identify as Black. As The Guardian put it, “the statistics suggest the vast majority of British universities employ between zero and two Black professors.”

In the pandemic time of teaching at home, the age of Zoom and Instagram, Black fashion academics, part-timers, and visiting professors across the country were suddenly discussing, strategizing, and visibly campaigning in ways that couldn’t have happened before. The coming together of so many creative and analytical minds meant goals were written and progress moved at speed.

Benita Odogwu-Anderson remembers the feeling of fellowship and empowerment that came with connecting with colleagues. “Those first few weeks were hours and hours of outpouring on Zoom calls. It felt cathartic. You started reflecting on many experiences in your own life that actually were racist situations that you might have brushed off or tried to absorb. We always knew we weren’t the only ones who were feeling this, but it was great to hear it from other people.”

Twelve months on, the group has over 40 members who are academics of color—fashion course leaders; visiting professors; and experts in fashion, styling, beauty, photography, and communication—most of whom didn’t know one another previously. They’ve been joined by a number of white affiliates who’ve pledged to raise FACE policies with their own university managements. Pascal Matthias says FACE created a unique space. “The powerful thing, he explains, is that FACE is “trans-institutional and independent. It’s powerful because we’re working inside. I’m now talking direct to the top of my institution in the knowledge that I have an organization of Black colleagues behind me. We’ve also harnessed the student voice. People are taking us seriously.”

FACE aims to transform the recruitment of both Black staff and students, and sets frameworks for measuring how that work is being done. It challenges the fact that fashion universities demand a PhD as a prerequisite for teaching, which can deter people in the industry from applying for senior posts and inevitably dwindles candidacy to mostly white academics. Matthias points out the further damaging consequences of that systemic cycle of exclusion: “If you don’t have Black academics, you don’t attract Black students. Recruitment policies are not fit for purpose.”

That’s not just a phrase. The point of taking a fashion degree is surely to prepare students for an industry that increasingly needs (but is still markedly lacking) diverse talents to employ at every managerial echelon. “Black or white, it’s quite possible to go through British education from five years old to 23, and never to have been taught by a Black tutor,” Matthias says. “And then you expect them to design for an audience which is global and multiracial? How’s that supposed to work? White-centricity in education is not best preparing students for the world.”

Amongst FACE’s targets are changing the National Student Survey, whose metrics for student satisfaction wield huge influence over prospective applicants but fails to consider student satisfaction around racial issues in their education. FACE set up its own student survey, SEE MY FACE, which asks all students to respond to such statements as: ‘I was taught by a diverse, unbiased, and inclusive teaching body’; ‘I felt my academic progression was impartial, unbiased, and equal,’ and ‘I felt able to study a diverse, unbiased, and inclusive curriculum.’ The results, not yet published, will be certain to make waves.

In the year since the murder of George Floyd, the demands for change are running at pace through the halls of British fashion education. To Benita Odogwu-Atkinson, that change is already becoming tangible and irreversible: “In adverts for university jobs, you can see there’s now a chain of thought about how they evolve, include, and diversify to create an equal society. Because it’s not just coming from us academics, it’s coming from the students who did the marching, and are outraged about what’s going on. A level of consciousness has been achieved that will never go backwards. And we will never go backwards.”

As Joy Julius stepped off the podium, she said that winning the first Black Excellence Prize meant much more than an achievement for herself. “The way I got here, through FACE, I feel that my collection speaks volumes. I’ve been seen, I’ve been heard, and I don’t want to stop there. But with FACE coming in, it felt better that there’s understanding and more education in this way.” She smiled. “It’s knowing that it’s not me, that I’m not alone in this. That I’m not isolated and there are all these important conversations coming. I feel honored to be part of a much bigger picture.”