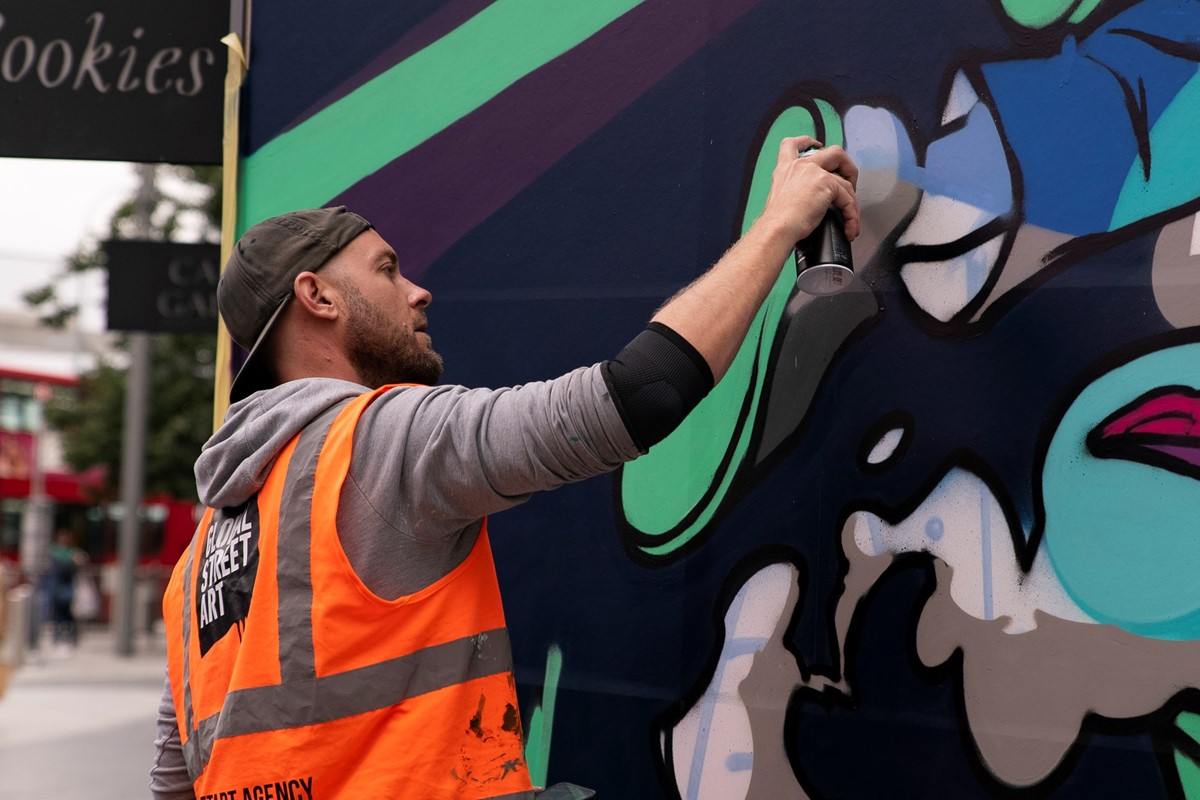 “Art has a role,” insists Ed Hicks. A rising star of London’s street art movement, Hicks is speaking to us fresh from the site of a new, large-scale mural, telling Dazed emphatically: “To make art, you’re dealing with live ammunition.” Few mediums are more potent than street art – a historically anti-establishment movement with a legacy of resistance and talking back to power.

Far removed from the usual institutions, street art isn’t the art you seek out within the sanctioned space of an art gallery, it’s the art you encounter when you aren’t expecting it, embedded within the fabric of your everyday environment. As opposed to the boundaries of a canvas, the streets allow opportunities for art on a more prodigious scale. “The wonderful thing about murals is that they are so much bigger than you,” Hicks continues. “You can get completely lost in them.”

Glimpse some rare Basquiat sketches he once gifted to a friend

Intimate and serene photographs of women, nude in their bedrooms

Once described by photographer Martha Cooper as an “outlaw art”, street art has evolved beyond its graffiti roots on the East Coast of America in the 1970s. In part due to the ascent of acclaimed artists such as Jean-Michel Basquiat and Keith Haring – who both prolifically decorated the buildings and subways of Downtown NYC with their illicit artworks – it gained recognition as a legitimate global movement. Artists such as Barbara Kruger and Jenny Holzer have further expanded ideas around which spaces it’s permissible for art to occupy, disseminating their provocative texts in various transitory mediums across cityscapes, monuments, notable buildings, and iconic locations throughout the world.

While it still retains that distinctive renegade, countercultural dimension, street art has, over the years, not only contributed to the ongoing conversation about public space but also enhanced the urban landscape with explosions of colour, creativity, and self-expression. London-based street artist Nacho Welles tells Dazed: “I think it can be a very positive thing for communities.”

As a vast city – twice the size of New York and 15 times the size of Paris – London provides a multitude of spaces and opportunities for emerging artists. Areas such as East London’s Shoreditch have become the locus of some of the city’s most vibrant and alluring street art, as well as being home to the headquarters of Global Street Art – an organisation dedicated to supporting the growth and development of this vital art form around the world and promoting their ongoing agenda to “live in painted cities”. “Our cities have existed for hundreds if not thousands of years and painting is a natural expression,” says GSA co-founder, Lee Bofkin. “When you allow more people to participate in shaping public spaces by painting it, you allow more forms of expression to happen there.”

A new short film, Wall to Wall, produced by Dazed in collaboration with Squarespace, the all-in-one website building and ecommerce platform, celebrates the unique street art culture thriving in London today. Together with Global Street Art, the documentary features a group of emerging and established local street artists showcasing their creativity across 12 of London’s most notable walls.

With the support of Squarespace, artists Jo Hicks, Ed Hicks, Frankie Strand, Nacho Welles, 3DOM, Captain Kris, and Soumya Thomas (aka Molu) were given the opportunity to interpret the concept of fantastical dreams crystallising into reality. From experimental typography to sweeping, gothic landscapes, each mural explores the interplay between the untethered imagination, the physicality of their work, and how technology has expanded their horizons and enabled them to reach further as artists. “A website made my career real,” says Frankie Strand, explaining the genesis of her design. “So I opted to have a circular colour wheel in the centre and animals in corresponding colours bursting from it… an explosion of possibilities.”

In today’s digital world, making site-specific, ephemeral artworks across multiple physical locations presents challenges to creatives. Nacho Welles explained to us how he’d overcome this obstacle: “A website has been really important for me, it’s a window to my work.” All the artists we spoke to reflected on the importance of immortalising their transitory murals by preserving them on a digital platform. Building an online portfolio has enabled them to make their work visible to a global audience while documenting their past projects. “I just realised the importance of having a presence online that isn’t a social media platform,” Captain Kris says. Jo Hicks found the tools provided by her Squarespace site resulted in new opportunities, telling Dazed: “Any imagery that I put up on my website I made sure that all the tags were there – not that I really know anything about SEO – but it was really easy to add those references and, through doing so, I think I’ve got a lot more work because I’ve been findable.”

Wall to Wall attests not only to the power and potential of street art but is a testament to creativity itself, empowering fellow dreamers to realise their dreams. Where there were once 12 anonymous empty spaces, there’s now art. “When you allow more people to participate in shaping public space by painting it, you allow more forms of expression to happen there,” Lee Bofkin reflects. “There isn’t much you can read from a blank wall but as soon as you see a mural or something painted, it’s something that was there that wasn’t there before.”

Above, watch Wall to Wall and take a look through the gallery for a glimpse of the finished murals and the artists behind them.