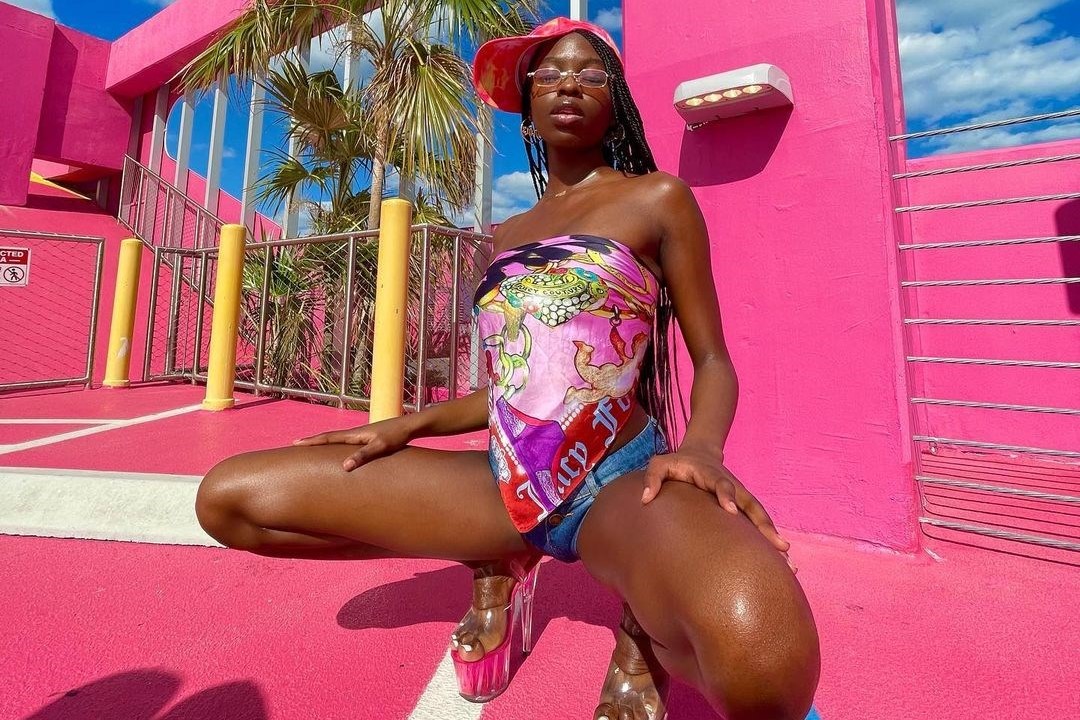 After being discovered by Gigi Hadid, the New York-based Cameroonian model is determined to get a seat at the table

Every now and then, we all have moments that get us thinking we’re the main character. Somebody might check you out as you’re walking down the street, or the barista at Pret kindly gives you your coffee on the house. But how many of us can say that we were discovered by Gigi Hadid while minding our own business?

Well, if your name is Nänga Awasum, you can. After running out of the door for castings, The New York-based model found herself candidly snapped pounding the pavement, with Hadid saying: “Shoutout to my NYC inspiration of the day: this queen.” Blissfully unaware, Awasum went to Zara to change her lewk and was approached by fans to let her know she had gone viral.

The Haute Couture circus has rolled into town!

You were facing the right way exactly where you were headed. Sunshine! Sending biiiiig love Nanga ! https://t.co/Eh75E0eL0p

Scrolling through her Instagram, it’s easy to see why Gigi and 37k followers are obsessed. Between her colourful on-trend Y2K fashions and ever-changing hairstyles, she’s got enough bikinis to costume a Gen-Z reboot of Baywatch (HBO Max, please make this happen).

After initially being discovered on Twitter, Awasum was already hustling as a model pre-Gigi fame and has modelled for the likes of GCDS, Luar, Nike, and Puma. So, what’s her advice for getting people’s attention when you’re out running errands? “Keep your head up,” she tells us. “I remember one observation a middle school teacher made about me was that my head is always up when I’m walking. It makes a huge difference to your posture and let’s people know you’re sure of yourself.”

Here, we meet the model to find out about her modelling aspirations and what she plans to do with her newfound platform.

Hi Nänga! Can you tell us a bit about yourself?

Nänga Awasum: I was born in Silver Spring, Maryland, but I’m originally of the Mankon Tribe of Bamenda, Cameroon. I’m the youngest of five girls, all overachievers, so I had quite the standards to live up to. I went to HBCU of Morgan State University as an architecture major and gender studies minor, but I couldn’t afford it anymore so I dropped out to pursue modelling.

How has your life changed since Gigi posted the picture of you?

Nänga Awasum: I’ve been getting noticed more than ever with way more opportunities. Yesterday, I was a model, today I am a model discovered by one of the top models in the world. I’ve always been a fan of Gigi and everyone I know who has ever met her has always said something about her contagious smile. I aspire to be like her in many ways, especially the way she leaves a positive impact on others, just the way she did with me.

What will you do with the outfit she spotted you in?

Nänga Awasum: I honestly don’t know! It’s made such an impact on my life this week, I might outfit repeat for some castings. Fashion week is just around the corner, so hopefully wearing it will bring some luck this September!

How would you describe your style? Where do you get inspiration from?

Nänga Awasum: Honestly, I was a poor kid growing up so everything was thrifted. I had older sisters whose style inspos were Kelis, Kimora Lee, Mary J Blige, Erykah Badu so my style evolved into a vintage Y2K love child with a modern twist.

Where would you like to take your modelling career? Who are your dream brands or collaborators?

Nänga Awasum: I definitely want to go to Europe and experience fashion weeks around the world. I miss the runway, 2020 took that away from us, but I’m ready for fashion week in September! My dream brands to work with are Dior, Versace, and Prada. I would also love to shoot with amazing photographers like Inez and Vinoodh.

Can you tell us a bit more about the difficulties you’ve faced as a model so far?

Nänga Awasum: Modelling, like any other art, is somebody’s craft, but the difference in my career is that I can’t simply put my camera away or close my sketchbook. My craft is my whole person and I live and sleep in my craft every day. In order to succeed in this industry, you have to truly remove yourself, look outside of yourself, and be your biggest critic. I have been my biggest enemy before, all in the name of being the best.

Being a dark skinned Black girl in this industry means more than just being hard. It’s the othering and feeling of not belonging. If I don’t say things like this and create the conversation, the culture will continue. It’s my responsibility with the sudden platform I’ve been given to bring attention to the hard part of it all, so that the change can actually happen. Even in that, my struggle is not immense because I’m skinny. This change also needs to happen for plus-sized dark skinned women in the industry too. I want change so that we can all have a seat at the table.

Being a dark skinned Black girl in this industry means more than just being hard. It’s the othering and feeling of not belonging. If I don’t say things like this and create the conversation, the culture will continue” – Nänga Awasum

What don’t people know about you that you want them to know?

Nänga Awasum: For one, this did happen by chance, but I have always been putting in the work – I’ve been on my own since I was 18. I can’t sew or draw, so modelling is my contribution to the amazing world of fashion I absolutely love and belong to.

Secondly, but most importantly, I want to shine light on the Anglophone Crisis in Cameroon. I am one of many Anglophone Cameroonians who love and cherish our rich culture and we are being wiped out by a deadly insurgence in the western provinces of the country. Homes, villages, and entire histories are being wiped out and the only solution is in the hands of President Paul Biya. The fortunate thing is that I am one of the few with a platform so as a Mankon woman, I am pleading to preserve the rich history of my people and I’m praying the small village and compound where my grandmother resides isn’t next.

What do you have coming up that you’re excited about?

Nänga Awasum: Honestly, I have a hard time answering that question as anything can happen. Last week, if you’d asked me that, I would have told you I had a new kitten on the way, not that Gigi Hadid would have opened up so many opportunities for me with Maybelline, SSENSE, and Nasty Gal. I now know that the best thing to do is let go and let God guide.