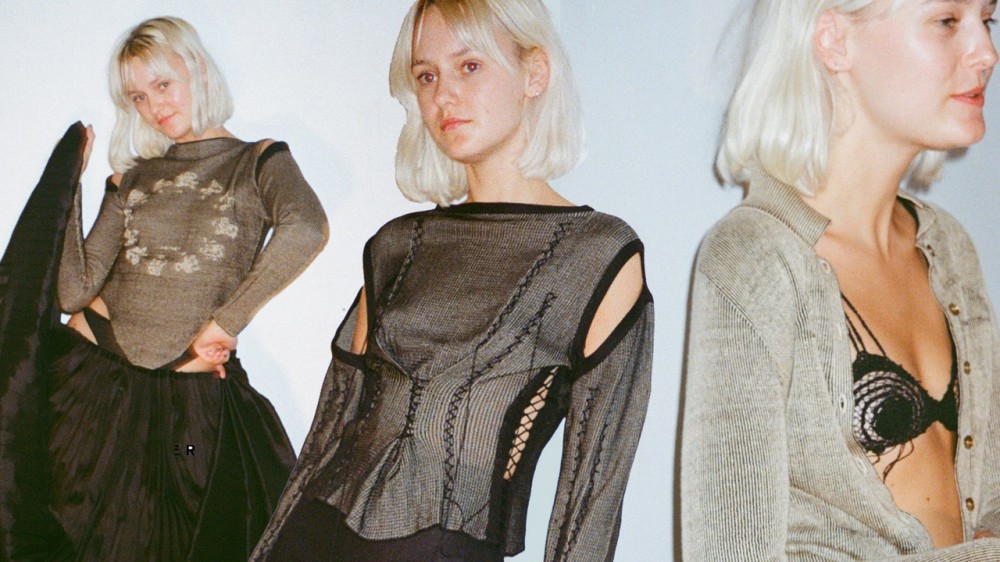 When Alexandra Hadjikyriacou and Jaimee Mckenna of Kepler began mapping out their new collection last spring—just as the first wave of lockdown reached London—their initial plan was to use the long stretch of time ahead of them to experiment with new techniques. But after a few weeks of uncertainty, they found themselves looking to the stars: quite literally. “This new collection was actually inspired by eclipses, because this year my star sign has gone through something like six of them,” says Hadjikyriacou cheerfully. “That image of the half-moon was something we ended up re-creating in slivers and curves across the contours of the body, and it became something quite sensual.”

Since launching in 2016, Hadjikyriacou and Mckenna have garnered a cult following for their inventive use of knit fabrics: crafting limited-edition pieces that carry both a disheveled glamour and a subtle, slinky sexiness, while quietly building a loyal customer base attracted both to their eye for rare and palpably luxurious textiles, and their appreciation for the handmade. “I’m always very happy to see that when people come and buy from us, they are willing to wait,” Hadjikyriacou notes. “Our customers know how long these pieces take, and they can see us making them by hand, so if you tell them it takes four to six weeks, they understand why.”

The influence of astrology and fate can be felt not only in this most recent collection, but the duo’s outlook more broadly. Hadjikyriacou and Mckenna first met (or perhaps were cosmically aligned) nearly a decade ago, while on textile and knitwear pathways at Central Saint Martins. In 2016, they graduated and decided to band together and launch Kepler, a name they settled on after being inspired by a planet discovered by NASA two years earlier, named Kepler-186f. Notable for being similar in size and distance from its nearest sun to earth, and thus potentially habitable, it serves as a neat parallel for the Kepler outlook, which takes the familiar and gives it an eerie, ethereal twist; their pieces synthesize fabrics that look centuries-old with silhouettes that feel firmly of the moment. (Think: a hand-spun bra that could be worn as an avant-garde outerwear piece, but crafted from a rare cut of Japanese eco-silk or Scottish cashmere.)

“When Alex and I first started having those conversations about what we wanted Kepler to be, the most important thing for both of us was that we wanted to make pieces that would stand the test of time,” says Mckenna. “We were always interested in making beautiful objects that you would want to keep; something you’d want to see in a museum or in a gallery, or passed down from generation to generation.”

“We really like the inside of the garment, as the reverse side always has a texture to it,” says Hadjikyriacou. Like the raw, visceral impact of seeing a Francis Bacon painting on the unprimed rear of a canvas, Kepler’s appreciation for the visceral and roughly hewn is communicated through both overall aesthetic and microscopic detail. “For this collection, we were looking at tapestries in museums that are kind of deteriorating, then mixing that with a very plush dupion silk to really emphasize that contrast,” she continues. As to any pivot to something a little racier, Mckenna adds, somewhat coyly, “The bras did seem to cause a bit of a stir on Instagram—we’ve been having a laugh about that.”

In the past, the pair have looked to more concrete references as a starting point for their collections—from geological charts to Eastern spiritualism to 1940s wedding dresses—but this time around, they wanted to approach things more intuitively. “I think with what’s going on in the world right now, and us both being 30 and entering a new stage in life, this collection was much more instinctive rather than looking at research so much,” says Hadjikyriacou.

Kepler also serves as an interesting case study within the challenges imposed by the pandemic that have forced many brands to slow down. While the duo are keen to express their sympathies for peers who have been impacted by the circumstances of the past year, they’re embracing the shift with both hands. “I think we both had a sigh of relief at seeing those changes,” Hadjikyriacou continues. “The world does need to slow down a lot, and we’re lucky as well, as the two of us have a craft that we really enjoy that is quite a slow process, and meditative and mindful. So even in the literal situation of being locked in, we have something we can do that we really enjoy.”

On this, Mckenna agrees. “Seeing now how everything has changed, it does give us a stronger sense that we’re doing the right thing,” she says. “The way the world is right now, we want to be making things that you want to keep, that aren’t trend-driven or disposable, that you’re buying it because you believe in it and you truly love it.”

As many labels have found themselves moving to new business models predicated on a more intimate relationship between maker and customer, it seems Kepler has found itself one step ahead. “It’s been a journey of learning how to say no to certain things, to keep the pace sustainable,” says Mckenna. “For instance, we don’t ever want to really put things on sale, because it just diminishes the craftsmanship and the work that goes into it. When things are made by hand, the price should never go down.” As the famous adage goes, slow and steady wins the race. Or did they see it in the stars?