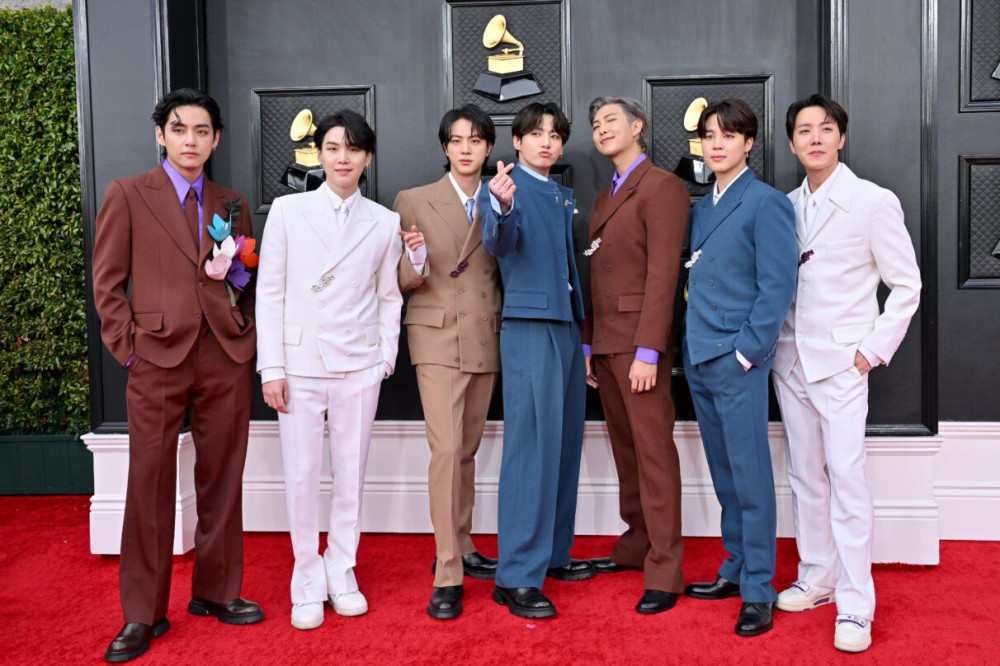 It seems that BTS has their eyes on their next music collaborations — one of which is fueling a possible Latine-K-pop collaboration! Last night (April 3), during the Grammys Red Carpet, E! News’ Laverne Cox asked the septet what other future dream collaborations they’d like to work on, especially after successful joint projects with artists Megan Thee Stallion, Halsey, and Coldplay.

At this, BTS had a few names in mind: Lady Gaga, Olivia Rodrigo, Snoop Dogg, and — the one that surprised us the most — J Balvin. If it wasn’t already clear, we are freaking out at the possibility!

Revealing their interest to collaborate with the Colombian singer and rapper has fulfilled a dream that Latine fans have been manifesting for a while now. Can you imagine BTS and Balvin together on a vivacious and energetic reggaeton track? The choreography alone would probably blow our minds! One thing’s for certain: if and when it comes, it’ll definitely break the internet. After all, BTS and their fans, ARMY, have the magic touch, making everything the group releases go viral.

Since then, ARMY has been showing their support for this possible collaboration, with hopes that they’ll showcase their artistry by singing in Spanish and Korean.

If it wasn’t enough to hear their response on the red carpet, their photo alongside J Balvin and Scooter Braun last night at the Grammys is making our heads spin at the possibility of them talking about making music together.

Considering BTS and J Balvin are in the same conglomerate together, a possible collaboration with J Balvin is not so far-fetched to expect in the future. Both artists are under Universal Music Group (UMG) and are connected through the South Korean entertainment conglomerate HYBE’s purchase of Braun’s Ithaca Holdings. In April 2021, J Balvin even greeted BTS through a video made for HYBE x Ithaca Holdings merge, which at the time fueled possible collaboration rumors.

With hopes for their potential and future collaboration, there’s no denying that it could easily take over the world with BTS showcasing their musicality and versatility in the music industry and Balvin bringing a much-needed pop-reggaeton flair to K-pop. Until then, let’s hope it comes soon!