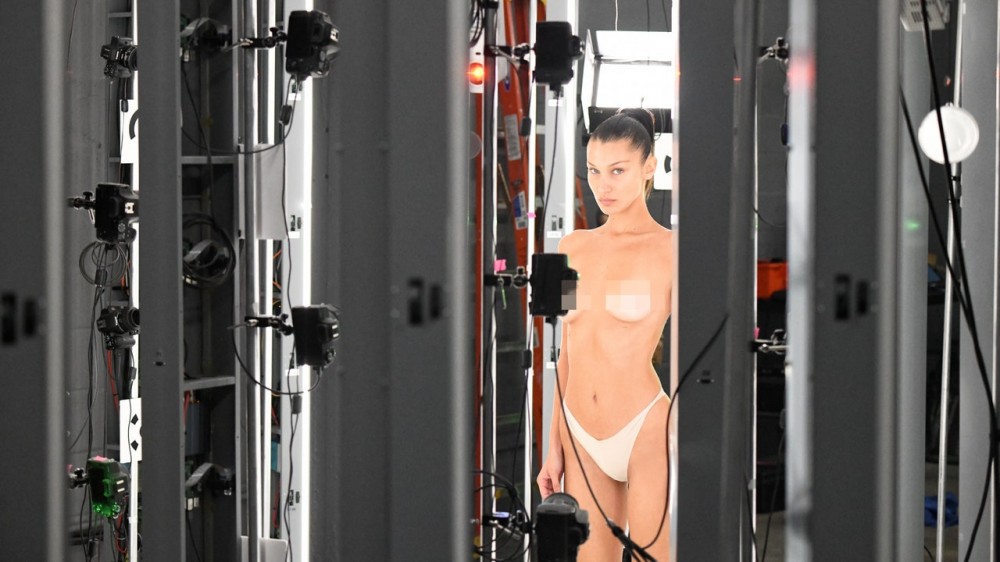 It seems right that Mugler’s artistic director Casey Cadwallader and Bella Hadid would meet on the dance floor. It was in Florence, at a dinner for Luisa Via Roma’s 90th anniversary, and moments before the party teed off; Hadid had walked down the retailer’s celebratory runway in a vintage Thierry Mugler ensemble. Cadwallader had also dressed the model around that time, designing the eye-popping sheer bodysuit she wore to a party in September 2018. “On the dance floor, I walked up to her and I said, ‘I’m Casey. I made that transparent bodysuit for you,’” says the designer over a Zoom call from Paris. “And she just went…” He smiles broadly and holds his arms out for a hug.

From that grooving moment onward, Cadwallader and Hadid have been friends, slowly building their relationship through runway shows and custom outfits. Hadid opening Mugler’s spring 2020 show was a big step for their collaboration—“I was just dying to open the show with her and I figured it was impossible and we asked and she was thrilled to do it,” he says. For fall 2020 Hadid had the honor of being the closing look. “Every time we’ve done anything together, she’s all smiles and warm energy,” he continues. “I can’t get enough.”

So when Paris’s confinement began and staging a physical event for Mugler’s first reveal of its spring 2021 collection—the brand is pivoting to see-now-buy-now and will show the full line next year—proved difficult, who other than Hadid to make Cadwallader’s digital dreams come true? “I didn’t want to go quiet during a show season, and this seems like a new format that was just ripe to explore,” the designer says. Although there was one small hitch: Cadwallader and the rest of his Mugler muses were in Paris, while Hadid was in New York.

“I said, ‘Wait, what if we make her into an avatar?’ I knew that Florian Joahn, the director of the film, had worked with a lot of CGI artists before, so we could play with CGI in the movie,” he continues. “We found a studio in Brooklyn and then Haley Wollens, the [New York–based] stylist that I work with, went with Bella to the studio and prepped her hair and makeup. Then all of a sudden Bella was standing there, you know, pretty much naked!” he says, noting that he was able to watch the digitization shoot take place over Zoom. The process of creating “Digi-Bella” as Cadwallader jokingly called his virtual muse, required Hadid to stand at the center of body-mapping cameras in next to nothing and also have her face specially scanned. Her hair and makeup had to be exact—no time for touch-ups in virtual postproduction. “We got her 3D form and then we had to really scratch our heads and say, ‘What are we going to do with it?’”

The result is a catwalk virtual Bella that opens the video wearing a white tank and seamed jeans. Later she transforms into a Pegasus-centaur hybrid leaping off the Palais Garnier. “I thought that that was a good fit for Bella because I know she rides horses and loves horses. I thought that she would get a kick out of it,” Cadwallader says. She closes the film with the rest of the cast in a black bodysuit not unlike the ones worn by Miley Cyrus, Cardi B, Megan Thee Stallion, and Dua Lipa earlier this summer.

“I didn’t want to mess it up. And that’s a lot of pressure because she’s a gorgeous human being and I take a lot of responsibility in taking her into the virtual world,” Cadwallader says, proudly reporting that real Bella is quite pleased with Digi-Bella. It’s not just Hadid who got final say on her appearance either—the designer made sure that each person cast in his look book and film, from Ariish Wol to Enantios Dromos, was able to sign off on their look and scene. “I love my cast so much. We spend so much time thinking about every single person, because it’s not just about their external aesthetics. It’s about this amazing glow that comes from within these really confident and amazing modern people,” says Cadwallader. “Things have changed a lot in the last 10 years. In the past it was just the brand mowing over the person; you used to work with the model and transform her. Now you work with a model because of who they are. You don’t want to plaster over someone and take away their identity.”

“It’s so fun to call everyone up and be like, ‘Ready? Let’s do this together.’ There’s so much energy there and it has been such a pleasure,” Cadwallader continues. “Going forward, there’s no way to unlearn that. Maybe we’ll have shows in February. Maybe we won’t; maybe I’ll be back in the CGI world.” Whatever happens, you can bet that Bella—real or virtual—will be by Cadwallader’s side.