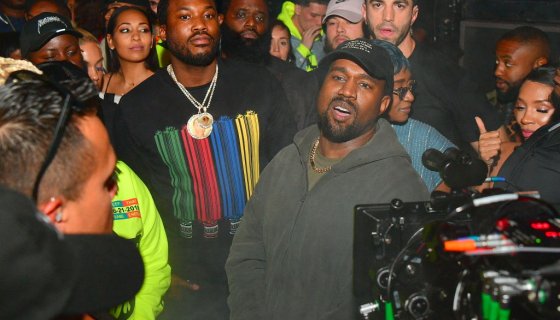 is once again telling fans to put some respect on his name.

On Wednesday (Jul 22), the “Going Bad” rapper took to Twitter to address the allegations made by that an illicit affair took place between the Philly rapper and Ye’s wife, , in 2019.

, in a since-deleted tweetstorm initiated by Yeezy himself on Wednesday, the Jesus Is King rapper made a slew of accusations against his wife and her family, stating that they flew in two psychiatrists to “51/50” him, which is a legal term used when a family is trying to have someone involuntarily committed to a mental institution when the pose harm to themselves or others.

While discussing his family, Kanye dropped the bombshell that he has secretly been planning to divorce Kim for the last twelve months to discuss prison reform.

“I been trying to get divorced since Kim met with Meek at the Warldolf [sic] for ‘prison reform,’” Kanye tweeted in reference to the Criminal Justice Reform Summit that went down in Los Angeles back in October 2019 in Los Angeles.

Kanye is really fighting for his his life. pic.twitter.com/m7KpkZOIaf

While Kanye did spill the tea, he made sure to let fans know that it was Kim who was out of line, not .

“Meek is my man and was respectful,” Kanye said. “Kim was out of line. I’m worth 5 billion dollars, more than that thru Christ.”

Responding to the rumor, Meek Mill took to Twitter to dispel the rumor that he was in a previous entanglement with Kim K. Without getting too specific with his response, the “Champions” rapper sent a message to fans letting them know that the “encounter” Kanye is referring to was nothing salacious, calling the rumor “cap.”

Although reports from the Kardashian camp deny that divorce is on the table for the couple, it didn’t stop Ye’s core fans from coming up with their own theories regarding the bizarre tweets. One subject that has many giving his new circle the side-eye is the few tweets that referenced Jordan Peele’s 2017 Horror film, Get Out.

“Everyone knows Get Out is about me,” Kanye continued. “Kris and Kim put out a statement without my approval, that is not what a wife should do. White Supremacy.”

While many understand that the horror film about race is fictional, fans couldn’t help but question the timing of regarding Kanye’s mental health after just two weeks prior.

Miss Donda, please give your genius child the right words to say, guide his light. We can’t continue to lose this great mind to his own pain and demons. I always looked up to you Mr West @kanyewest and always will pic.twitter.com/tuCM4zvpQm

Still, fans have vowed to stick by Yeezy’s side to ensure that his truth is told and that he remains safe. The cry championing the Chicago hitmaker became even louder after Ye’s old nemesis  Taylor Swift decided to do a little trolling of her own by announcing that she will be surprising fans with an album and video to be released on the same day as Kanye’s highly anticipated album and film dedicated to his late mother, Donda: With Child.

Surprise 🤗 Tonight at midnight I’ll be releasing my 8th studio album, folklore; an entire brand new album of songs I’ve poured all of my whims, dreams, fears, and musings into. Pre-order at https://t.co/zSHpnhUlLb pic.twitter.com/4ZVGy4l23b

While Swift has tried to maintain that she is always on the receiving end of slander from the West camp, many fans called her out for trying to use Yeezy’s low moment to take a subliminal shot.

TAYLOR DROPPING A SURPRISE ALBUM THE SAME DAY KANYE WAS SUPPOSED TO DROP HIS LMFAAAOOOO THESE TWO I STG pic.twitter.com/nrrViIXMli

Check out the powerful visual for Donda that Kanye released to honor his late mother on her birthday below.