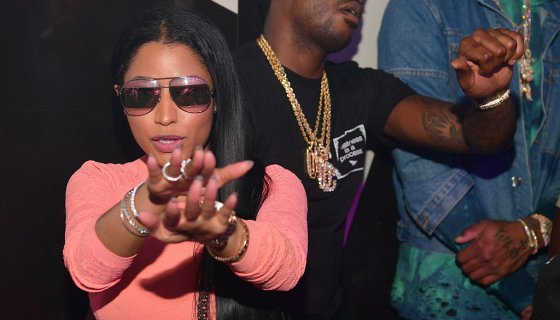 may have finally confirmed rumors that she is expecting, but it was ‘s response to the news that reportedly held her Barbz’ attention.

On Monday (Jul 20), Nicki Minaj took to Instagram to share the news that she was indeed pregnant. , the Camp style announcement set the internet ablaze with both congratulations and jokes, but it was ‘s response to a tweet by DemonTime host and creator, Justin LaBoy, who called out fans for being excited about the rapper’s pregnancy before adding that she “wouldn’t care about [theirs].”

While a slew of influencer’s followers was laughing in agreement, it was Meek Mill’s since deleted response in emojis that left the Barbz charged up.

Although the “Going Bad” rapper deleted his response, that didn’t stop Nicki Minaj’s fans from sharing their two cents regarding his reply.

If your ever looking for Meek Mill, find some women’s business, he’ll be there. pic.twitter.com/oJ4oWNrx2A

While Barbz tried to get a dragging party started on Twitter, the rambunctious fan club fell short after many called them out for looking for a reason to claim the Philly rapper is still concerned about his ex.

Still, Meek Mill responded to the pointless slander Twitter, calling for Minaj’s fans to quit over examining his posts, before adding that they should learn to “live in their own body.”

Meek Mill and Nicki Minaj started dating in 2015 before ultimately splitting two years later. The two rappers’ public breakup turned feud includes ongoing digital back-and-forths between them despite the fact the two have each moved on romantically. to and Meek recently welcomed a son with his current girlfriend, .