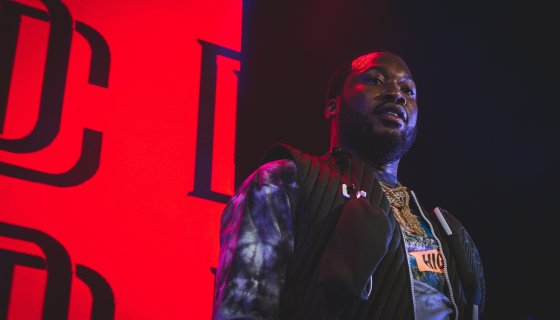 If you were wondering if the relationship between and his ex-girlfriend, was a cordial one following their breakup, the answer to that is an emphatic no.

Friday (Jan.25) Meek Mill just happened to run into his former flame Nicki Minaj and her husband, Kenneth Petty, while shopping at Maxfield, a high-end retail store in West Hollywood. TMZ, of course, got a hold of the footage, and you can see and hear Meek and Petty going at each other, calling one another p***y and Minaj calling the Philly rapper a b***h in a shouting match that almost allegedly came to blows.

TMZ got a hold of the face-off, and you can see Meek in white being held back and escorted out of the store by both his own security team and guys working for the boutique. In the background, you clearly hear Nicki and Ken’s voices … they’re pretty distinctive.

No official word on what started the beef, but based on what we can make out … it sounds like they were talking crap to each other over Nicki — plain and simple. Oh, and get this … sources tell us NM and KP were alone, and Meek was rolling with 10 heads deep.

Anyway, Ken calls Meek a p***y, and Meek calls him one back while adding he can’t face or talk to him one-on-one without a cluster of people in between. Nicki gets in on the yelling too … seemingly calling Meek a bitch, and also seemingly adding he can’t get over her.

It looks like there has been no love lost between both Meek and Nicki. It’s been crickets on social media from both parties involved with one cryptic tweet coming from the Championships crafter.

Anyway, maybe Nicki will discuss what went down when she decides to bring back Queen Radio.