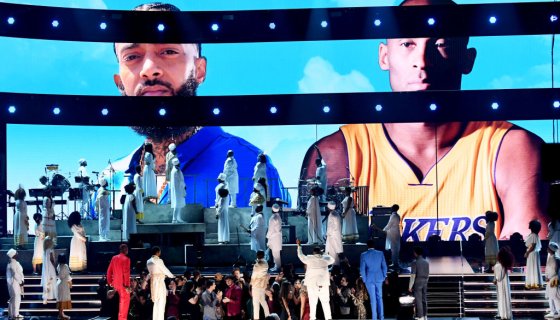 The 62nd Annual Grammy Awards featured a tribute to the late that, for obvious reasons, had an even deeper effect due to the unfortunate loss of . With the somber air hanging about in the Staples Center, Meek Mill and Roddy Ricch honored Neighborhood Nip in song with “Letter To Nipsey” Sunday night and the song is now available to the masses.

Meek, who worked with Nipsey on DJ Mustard’s Cold Summer project released in 2016, opens up the track with heartfelt bars over Papamitrou aka Nick Paz’s production.

“I just left your viewing at the Staples Center/Obama wrote you a letter, yeah, you made it n*gga/I even heard you had some players to come to Vegas with us/And them suckers could never kill you, it only made you bigger,” Meek begins.

Roddy Ricch, who worked with Nipsey on the Grammy Award-winning track “Racks In The Middle,” matched Meek’s emotion and focus in the second half of the song.

“I was in Miami when I lost you, I ain’t talk about it/I remember I bawled out in tears when I saw your body/In a flight back home, had cold days in LA/Had to turn off my phone, throw on the shades and meditate,” Ricch expressed in the start of his verse.

During the Grammy Awards tribute, Meek and Roddy took to the stage with YG, John Legend, DJ Khaled and Kirk Franklin for a moving tribute performance. Nipsey also was honored with the Best Rap Performance award for his song “Racks In The Middle” with Roddy Ricch. DJ Khaled’s “Higher” featuring Legend and Nipsey took home the Best Rap/Sung Performance award.

Atlantic Records and Meek Mill both said that all sales and proceeds of “Letter To Nipsey” will go directly to the late rapper’s family. The marathon continues, indeed.

Check out the track and reactions from Twitter below.

Letter to nip- every cent from this song made will go to Nipsey’s family!

Listening Meek Mill & Roddy Ricch pour their heart out on “Letter to Nipsey” this morning pic.twitter.com/5kA6QRDfjl

Nigga this “Letter To Nipsey” got me crying fr

“I just left ya viewing at the Staples Center. Obama wrote you a letter. Yeah, you made it nigga. I even heard you had some plans to come to Vegas with us. Them suckas could never kill you. It only made you BIGGER.”

Letter To Nipsey play that shit back 💯 @MeekMill @RoddyRicch

Letter To Nipsey Is That Pain !!! Song Made Me Shed A Tear After All This Dramatic Stuff That Went On Today 💔 @MeekMill @RoddyRicch

letter to nipsey really has me getting emotional wow @MeekMill

Letter to Nipsey was much needed right now, glad they dropped this beautiful song pic.twitter.com/sjgspjcMA7

Listening to Letter To Nipsey and trying to make sense of Today … https://t.co/TdkrY4isid