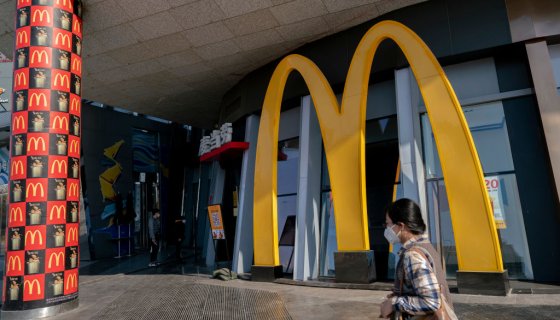 With the arrival of , which is currently taking its toll countries around the world, there has been an unfortunate increase in xenophobia and racism.

US fast-food chain McDonald’s had to issue an apology after a video surfaced on Twitter after one of its restaurants located in Southern China had a sign up saying Black people were not allowed in the restaurant. It specifically stated:

“We’ve been informed that from now on, Black people are not allowed to enter the restaurant. For the sake of your health consciously notify the local police for medical isolation, please understand the inconvenience caused.”

Again, for those who still doubt that Black people and particularly #AfricansinChina are being targeted we feel it is our duty to share this. A sign at a @McDonalds restaurant seems to make this perfectly clear pic.twitter.com/FaveKrdQHi

Africans in the southern metropolis of Guangzhou had issues with law enforcement after local officials announced there were a cluster COVID-19 cases in a neighborhood with a large migrant population.

The fast-food chain apologized, and a spokesman for McDonald’s claimed the sign was  “not representative of our inclusive values.” In an emailed statement, McDonald’s said it took the down the notice immediately and temporarily closed the location “immediately upon learning of an unauthorized communication to our guests.”

“China is currently evicting Africans in the country, reportedly in a way of shifting blame of the Coronavirus onto them” pic.twitter.com/Eio4uFGq53

Africans also revealed to the AFP that they have been forcibly removed or evicted from their residences by police and refused service at restaurants, shops and have been the subject of mass testing and random quarantines. If you search Africans in China on Twitter, you will find a bevy of tweets displaying the poor treatment of Africans in the country due to COVID-19.

Racism towards Africans in China. pic.twitter.com/hJodvevZKh

UPDATE: Ugandan mother living in #China in tears as she has been feeding her 2 children water because of Coronavirus-fuelled Xenophobia. She cannot go out to buy food and landlord gave her 2 days to vacate apartment. Africans being targetted pic.twitter.com/G7E9uFcL7A

These are truly some sad and trying times. When Donald Trump put his racism on full display by calling the coronavirus the fueling violence against Chinese Americans in the country, many came to their defense. Now Blacks are asking for the energy to be reciprocated.

And I’m going to need all of these Asian celebrities speaking out against attacks brought on by Trump calling the virus “Chinese” to speak up about how Africans are suffering and have ALWAYS been suffering in China. https://t.co/EJZ16K2JkT