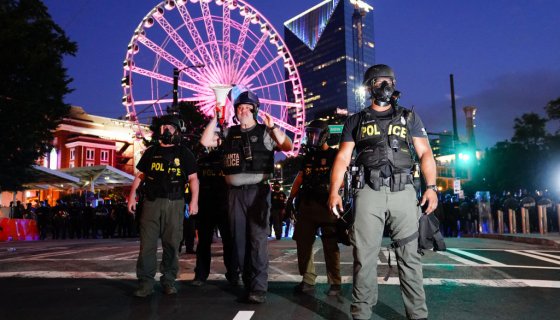 A pair of students who attend Spelman College and Morehouse College respectively found themselves embroiled in an incident with police in a potentially dangerous encounter. With the bodycam video displaying the officers’ tactics in handling the students, two of the officers were let go from their positions today.

CBS 46 reports that Taniyah Pilgrim, who attends Spelman, and her friend Messiah Young of Morehouse were driving home from a protest after the city instituted a curfew this past Saturday. A reporter from the outlet recorded the moment where Atlanta police swarmed the vehicle Pilgrim and Young were riding in and smashed out the windows of the car, tased Young, and dragged both Pilgrim and Young out of the vehicle.

In a police report, one of the officers on the scene had reason to suspect Young was armed, although no weapon was found inside. However, when one of the officers repeatedly shouted “gun,” another officer then tased Young and proceeded to roughly handle him in during an intense exchange.

During a press conference on Sunday, and Atlanta Police Department Cheif Erika Shields saw it fit to fire two of the officers from the incident and to place three others on desk duty while an investigation takes place.

“We have been handed an enormous obstacle and have by and large, done it as well as we could in the space that we’re being afforded,” Shields said at the presser. “It’s an unpleasant space to be in, but that does not relieve us of our responsibilities. And we have a responsibility, when we handle any incident, to not escalate the incident and not cause further harm or injury.”

The video of the incident can be viewed below but we must warn you that it could be troubling for some.

WATCH: here’s my video of when two young people were tased, dragged out of their car in downtown Atlanta Saturday night. We’re working to find out why this happened and what led up to it @cbs46 https://t.co/JL4nMFCnls pic.twitter.com/USRby69Kp2