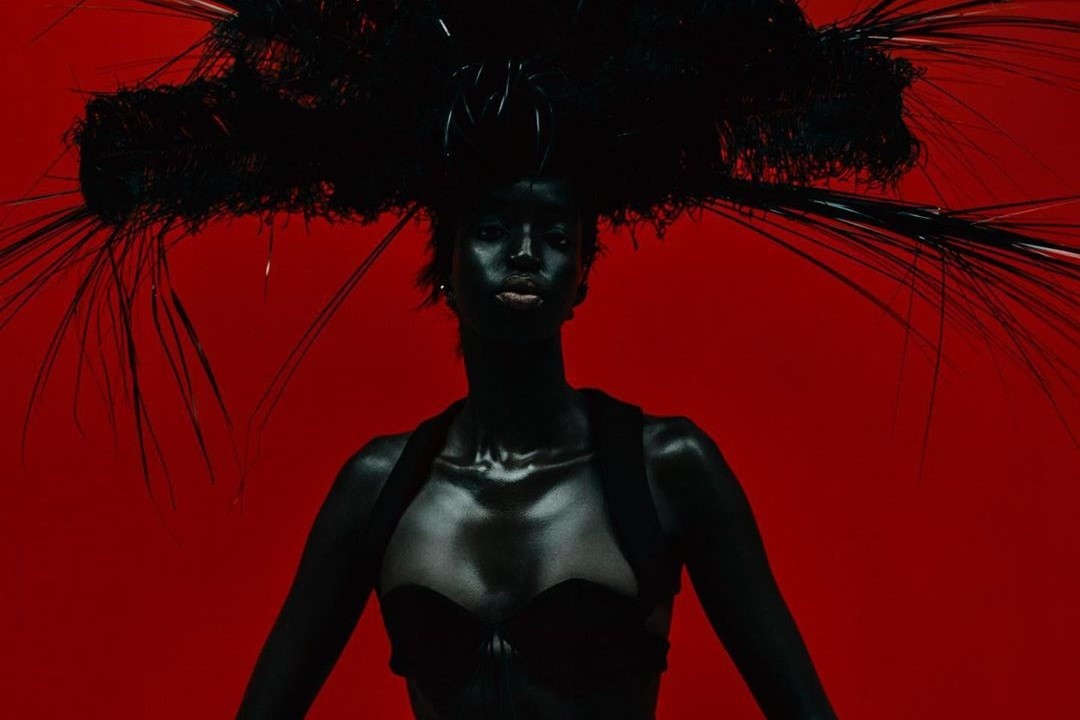 After his grandmother passed away earlier this year, Maximilian Davis wanted to honour her memory through his work. Searching for a way to create something as meaningful to him as it was to her, the rising Manchester-born CSM grad turned his attention to Trinidad’s annual Carnival. “Carnival is a time all sides of my family would come together in Trinidad to celebrate,” he explains over the phone. “What I wanted to understand was why we were celebrating and the reason we all got together to celebrate every year.” And so he began his research.

Digging into Carnival’s origins, Davis’s investigation led him to the history of enslaved people in Trinidad and Tobago, who were originally forced to perform for their European slave owners each year. In 1834, they finally got their emancipation and reclaimed the event in the years that followed – turning it into a celebration of freedom and liberation. Inspired by the event’s bold spirit and the outfits unique to Trinidad Carnival, the designer set about creating his debut collection ahead of joining Lulu Kennedy’s SS21 Fashion East line-up.

In homage to contemporary Carnival costumes, the offering, J’ouvert, was made up of slinky hammered silk skirts and gowns trimmed with goose feathers, bralettes cut to emphasise harness-detailing to their backs, and shoulder-baring halter-necks. Elsewhere, clean tailoring was seen across pieces including slim trousers and oversized tuxes, as modelled on 19th century frock coats and other period garments.

Finished off with statement headpieces by Nasir Mazhar, the result was a refined collection that examines a part of Black history steeped in liberation, looks forward to the future and what it holds, and strikes a balance between sexy and elegant – which, Davis explains, was extremely important to him. “I feel like we’ve always been seen in a one-dimensional way, and I really wanted to make something that showed people of colour and Black people in a different light,” he says. “I want to show that Black elegance is a thing.”

Here, we get to know Davis as he discusses being the newest member of the Fashion East family, the life lessons he learnt working under Grace Wales Bonner, and creating a collection against the backdrop of a year like no other.

Hey Maximilian! Your SS21 collection was inspired by your grandmother’s Trinidadian heritage and your family’s links to its Carnival. Can you go into a bit more detail about how these influences played into the clothing itself?

Maximilian Davis: I was drawn to the tailoring and the clothing they wore (at the Carnival) in the 19th century – I really liked the dress codes and the seams, so I used those two references from the research in the tailoring of the collection. I also wanted it to have two sides – on one side, tailoring based on the history of Carnival from the 19th century, and on the other, easier to wear contemporary pieces based on what I saw my family wear in Trinidad, which is how I created the tuxedos. Looking at what people wear to Carnival today and what they wore in the 19th century, I also realised the harlequin print was quite a big thing, so that’s what inspired the printed shirts and denim pants.

I was designing J’ouvert during lockdown as the Black Lives Matter protests were happening around the world, and I really felt like this was the time for me to create a collection and speak on what Black people were going through and the way we have been treated in the past. I felt like we’ve previously been seen in a one dimensional way, so I really wanted to make something that showed people of colour and Black people in a different light. I want to show Black elegance is a thing, and for the industry and the audience to realise that.

You collaborated with Ibrahim Kamara and Rafael Pavarotti when it came to presenting your vision. Why did you pick these two creatives?

Maximilian Davis: I met Ibrahim, who styled the collection, through friends of friends in London at a club night called PDA. We realised we had a lot in common being Black and gay and working in fashion and that made us feel connected – and of course, that was something that connects our work as well. Rafael is really good friends with Ibrahim and I saw his work when they started shooting together. The way he shoots the Black body is perfect – he presents it in a really elegant and beautiful way. And he’s from Brazil, and they have a massive Carnival there. So for him to shoot my lookbook was a dream come true.

What was it like creating a collection against the backdrop of 2020?

Maximilian Davis: I think now is a good time for me to release this collection after all that has happened. People are trying to be better – they’re more willing to listen to people of different races’ experiences of racism, and they’re more open to talking and learning about it, which is what this collection is doing. The one thing I keep telling people is that I don’t want people to see my collection as just beautiful clothes, in beautiful imagery by an amazing photographer and an amazing stylist. I want them to understand the meaning behind it and understand that it’s a celebration of freedom.

“I feel like we’ve always been seen in a one-dimensional way, and I really wanted to make something that showed people of colour and Black people in a different light. I want to show that Black elegance is a thing” – Maximilian Davis

How would you sum up your brand’s aesthetics?

How did being in lockdown affect your creative process?

Maximilian Davis: It made me think about how I wanted to communicate my research and this collection with the audience, which I did digitally through film for Fashion East. I feel like it also made me think that, in the future, I’m not going to think that because we are back to normal I should do it the old way – a show is only like 15 minutes and then people are quick to go on to the next, whereas this really gave people the chance to understand the chaos that comes with Carnival through the visuals and the music, which is a big thing within the collection and my life. In the future I think I’ll still engage with the audience in this way.

Going a bit further back, what sparked your initial interest in fashion?

Maximilian Davis: My dad and my sister both studied fashion design, but neither carried on with a career in the fashion industry. I felt like it was something I had to do from a young age.

You worked under Grace Wales Bonner after graduating from Central Saint Martins. What did you learn there?

Maximilian Davis: I was actually designing tailoring, commercial pieces, and knitwear at Wales Bonner until very recently. I learnt not to be afraid of who I am, and to talk about my race and identity. If it wasn’t for Grace, fashion could look a lot different right now. I also learnt how to put together research and use it to create a collection, about different fabrics, and gained a new understanding of the creative process as a whole.

How did you feel when you found out you’d been picked to join the Fashion East family?

Maximilian Davis: I found out during lockdown, so I wasn’t sure what was happening! It was quite surreal – I almost cried.

Check out Maximilian’s full SS21 collection in the gallery above, and head here to revisit everything that happened at this season’s very different Fashion East show.