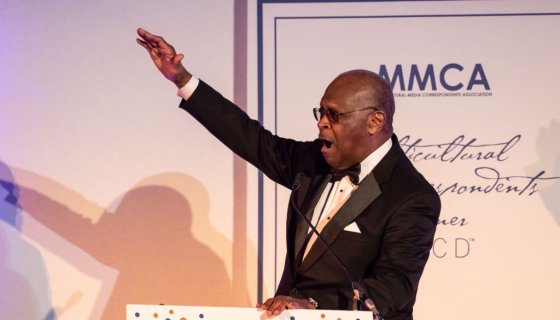 Former Presidential has reportedly tested positive for COVID-19. After the announcement, Twitter made sure to point out he had been spotted at Donald Trump’s Tulsa rally with no mask on.

We are sorry to announce that Herman Cain has tested positive for COVID-19, and is currently receiving treatment in an Atlanta-area hospital.

Please keep him, and all who are battling this virus, in your prayers.

Our full statement appears below. Updates to follow. pic.twitter.com/lDRW7Rla4e

Caine’s team revealed the diagnosis today (July 2) social media and revealed that he is receiving treatment at an Atlanta-area hospital. He was informed that he tested positive for COVID-19 on Monday (June 29) and he was hospitalized on Wednesday after his symptoms worsened.

Per the statement, “Mr. Cain did not require a respirator, and he is awake and alert.”

Almost immediately, it was noted that Caine, a Republican who contributes to conservative media outlet Newsmax, was at a couple of weeks ago on June 20. On that day, Caine was seen practicing anything but social distancing with numerous people around him.

Twitter users made sure to point out the jig especially considering the GOP has made not wearing a mask a political statement. Peep some of the more poignant reactions and interpretations of the peak irony below.

12 days later: Herman Cain is currently in the hospital with COVID. https://t.co/XTkzvANtCe

Herman Cain, 74-year-old co-chair of "Black Voices for Trump" did not wear a mask at President Trump's Tulsa rally.

The 2012 presidential candidate & businessman did not travel to Tulsa on the Trump campaign's chartered plane, according to GOP officials.https://t.co/zvi9VFvPgU pic.twitter.com/8IIbAKD9ht

Herman Cain's Twitter account sent this while Herman Cain was in the hospital with COVID, which he quite possibly contracted at a Trump rally where masks were not mandatory.

Conservatism is a religion, and its god is death. https://t.co/W9AZmARHjY

Herman Cain is now hospitalized and being treated for COVID-19.

This is Herman Cain.

Should you be like Herman Cain?
NEIN. NEIN. NEIN. pic.twitter.com/OvfbcqiZTr

So Herman Cain saw the disproportionately high number of Black folks getting #Covid19 and still tap danced his ass into a Trump Klan rally coronavirus incubator? Chile we been tryna tell y'all, "don't let #YallsPresident get you Fd up". Anyways, get well soon. 🤦🏾‍♀️ https://t.co/oPPV52cHHm

Damn, Herman Cain has been hospitalized with COVID after attending Trump’s Tulsa rally… well, he knew the dangers of being around a buncha racist white folks… Suddenly #ICantBreathe is taking on irony…

It’s 11 days later and Herman Cain has been hospitalized in Atlanta with coronavirus. 🤡