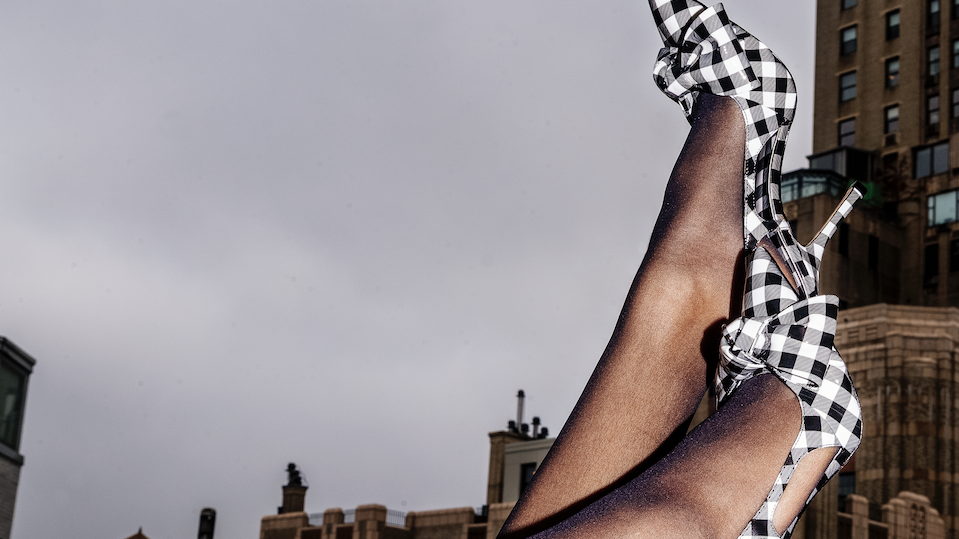 If, like me, you follow Marina Larroudé on Instagram, you’ll have deduced that she’s on the verge of something big. Marina doesn’t do anything by halves, least of all social media, but she’s been particularly active of late.

The first sign that something was up was the green sweatshirt she wore in a snapshot on the beach in Malibu, posted at the halfway point of an envy enducing cross country RV trip she took with her family back in June. Stamped across the chest of the sweatshirt was the Larroudé name in a sans serif font not too dissimilar from the blocky logos of Supreme and Glossier. More recently, she’s been posting clips made by friends hypothesizing about her next move. Designers Joseph Altuzarra and Fausto Puglisi, both of whom she met during her Style.com days submitted videos (Style.com is where I know Marina from, too). Former colleagues from Teen Vogue and Barneys New York sent their best wishes, as well.

Today the big reveal is finally here. Larroudé, which she’s launching with her financier and business manager husband Ricardo in the role of CEO, is open for business online, with Instagram shopping coming soon. Shoes are the focus of the direct-to-consumer operation, but there’s a couple of clutches in the first delivery—a sort of teaser of what this lifestyle brand could become. “We see a huge opportunity,” Marina says. “A lot of my career in fashion has been, ‘sorry you can’t sit here with us’; fashion isn’t an inclusive environment. I want Larroudé to have the best product in terms of quality, but I also want more people to have access to that quality.” Describing the brand, she adds, “we like to think of Benetton meets Celine meets Supreme.”

Of course, Marina is bringing her signature enthusiasm to the new endeavor. She enlisted her pal, Hunter Abrams, to shoot the campaign and her friends to star in it, Tina Leung and Deena Aljuhani Abdulaziz, among them, the latter of whom says “the collection actually is Marina’s essence: playful, fun, and joyful.” Wild postings of the photographs accompanied by personal quotes started appearing in New York this morning, and they’re the kind of thing that makes you look twice. “It’s about real human beings,” Marina says of their marketing plan, “and we want to hear what they have to say, not just see what they look like.”

Marina has the instincts of an influencer, but she knows that the brand will live and die by its products. Conveniently, she’s got bona fides in this area too, having developed Barneys’ private label ready-to-wear, shoes, handbags,  and accessories, from design through production. Each Larroudé style, be it a strappy heeled sandal or a pointy-toed loafer, has a matching interior (no ugly beige inner soles) and comes with memory foam lining so it’s as comfortable as your favorite sneaker (the wider last and toe box help in that regard, as well).

“We said, ‘let’s not compromise on any single thing and then let’s figure out the price,’” Marina explains. They sourced a factory in their native Brazil that specializes in handmade shoes, hired a designer technician with 15 years of experience, and agreed on $275 retail for the strappy sandal, which would be a comparative steal at $450.

Ricardo had some clever ideas, too. Each shoe comes with its own QR code printed on the sole. “Imagine you’re in the supermarket and someone says, ‘I like your shoes.’ If you say ‘you should get them’ and that person points their camera and buys the shoe, I know it was you because you registered, and I will give you $10,” Ricardo says. “And that person is going to get $15 off.” In essence, it’s a digital referral system that rewards both existing clients and new ones by connecting word-of-mouth recommendations to actual transactions. Ricardo continues: “Department stores made sense because they put everything good in one place. Now you can be walking down the street and shopping at same time.”

Candy Pratts Price, Style.com’s Executive Fashion Director and Marina’s onetime boss, has given her stamp of approval to the launch. “She could’ve done anything—jewelry, for instance—but a shoe gets you places,” Pratts Price says. “I support anyone who has courage and I’m very proud of her.”

It’s been a lot of hard work, to be sure. The Larroudés have been pulling 14- and 16-hour days in the lead up to the launch. Ricardo is still flabbergasted that Marina can spend an hour-and-a-half choosing the right shade of beige, but it’s a happy, delighted kind of flabbergasted. “Go and have fun, live your life fearless. Just do it,” Marina says. It might as well be the Larroudé motto.