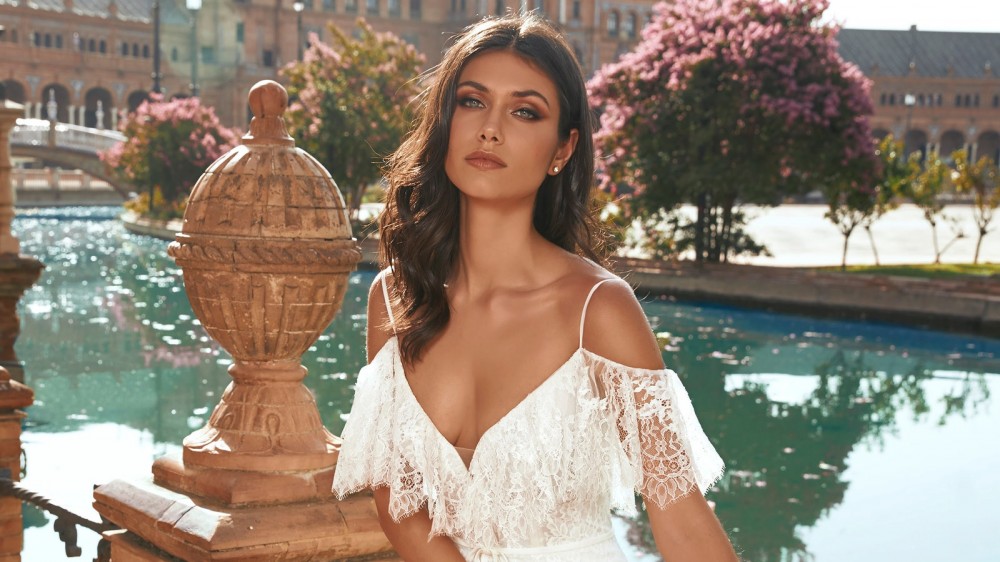 Things are looking up in the world of weddings. As COVID-19 vaccines roll out, there’s a growing sense of optimism that in-person celebrations aren’t far off; some could take place as soon as this summer. The United Kingdom recently announced a plan for weddings to “return to normal, with no limit on attendees” on June 21st. The city’s third lockdown will also officially lift that day.

Needless to say, brides around the world saw it as a glimmer of hope for their own postponed or TBD nuptials. If they’re ready to start fantasizing about “the dress” again, a new collaboration is debuting at exactly the right time: Spanish bridal house Pronovias tapped Marchesa for a 21-dress collection, merging the former’s global reach with the latter’s romantic aesthetic and couture flourishes.

Like many partnerships, this one began with mutual admiration. Two years ago, Georgina Chapman took her Marchesa bridal collection to Valmont Barcelona Bridal Fashion Week, the industry’s biggest event held in Pronovias’s hometown. She met with the brand’s CEO, Amandine Ohayon, and they quickly formed a plan to work together. “We’ve always admired Marchesa and wanted to do something a little different,” Ohayon says.

Marchesa fans will recognize many of the details and finishes: the corseted busts, 3-D flowers, guipure lace, and matching veils are all Chapman signatures. But the designer said she was also excited to experiment with new silhouettes and “branch out” beyond her traditional aesthetic. She called out a lace dress, the Oropesse, as a bit of a departure, with its high, halter neckline and a sheer layer falling away from the body. Another free-flowing style, the Caneta, had a sweet empire silhouette and layers of ethereal handkerchief lace. “Creating dresses for a broader marketplace allowed us to be accessible not just in price, but also in silhouette,” she adds. “There really is a dress for every kind of bride out there.”

Ohayon said those easier, comfier shapes were partly informed by the feedback she received from Pronovias brides throughout the pandemic. “Girls are quite uncertain where they’re going to get married, so they’re looking at more versatile options,” she explains. “They’re a little simpler and easier, and I think they’ll be very successful.”

The collection will arrive in stores worldwide in April, with dates varying by city and their stages of lockdown. Pronovias operates 50 of its own stores, including seven in the United States, where Ohayon is hoping to grow her audience. Chapman will likely pick up some new fans in Europe and Asia, but her local fans will be just as thrilled to see the dresses up close—and find a Marchesa design within their budget. The dresses start at around $2,000. “Most people can only dream about wearing Marchesa,” Pronovias’s chief creative director Alessandra Rinaudo said. “Our mission was to give them that opportunity.” Ahead of its debut, scroll through every dress here.