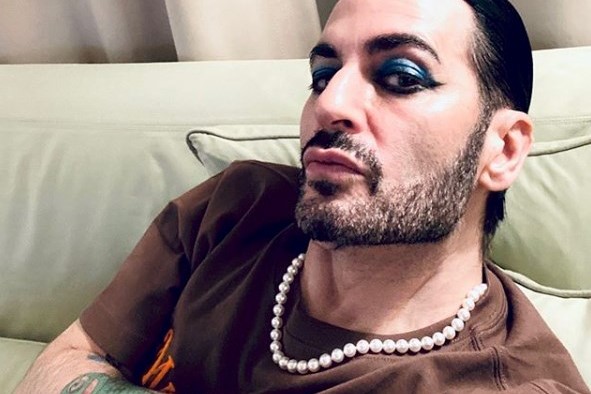 The designer takes on the role of housekeeper, engineer, barman, and bellboy in a new short documenting his time in isolation at NY’s Mercer Hotel

In the midst of lockdown, Marc Jacobs was a beacon of light. Posting messages of positivity and turning look after look on his personal IG, the NY designer spent his time documenting his stay at the Mercer Hotel, where he moved with his husband, Nick Newbold, as the city began to grind to halt.

Fast forward to now, and it appears that documentation wasn’t just for the benefit of Instagram. Landing late last night on YouTube was A New York Story – a short, poignant film which details Jacobs’ time in isolation from start to finish.

Beginning with him entering the hotel, it follows him as he orders takeout, gives his dogs Neville and Lady a bath, perfects his smoky eye, and gets busy with a box dye when his hair is in need of a refresh.

With Newbold behind the camera, the short intermittently cuts to the deserted streets outside, as coffee cups roll across the streets like urban cartoon tumbleweeds, and captures Jacobs as he gets dolled up, escapes his room for the night, and heads to the hotel’s empty basement bar. The moment sees him tapping his Rick Owens-booted foot to the music and sipping a Diet Coke completely alone, and tbh it’s actually pretty heart-wrenching.

With the film also seeing Jacobs step into a series of supporting roles, including that of an engineer called up to his room, the housekeeper, the barman, and the concierge, there’s notes of Lost In Translation and a dash of Wes Anderson’s whimsy to the whole thing (not least when he channels Margot Tenenbaum via a severe side-parting and cute hair clip at one point).

Announcing the film on his IG channel, Jacobs wrote “A labour of love in the time of Corona” and paid tribute to Newbold, adding “Nick is that guy, the one who if you are lucky, you get the chance to know and grow with all your life.” It’s not just his husband he pays tribute to, though. As the credits roll, Jacobs final message reads “I Love You, New York, In Sickness And In Health.”

Watch the full film below.