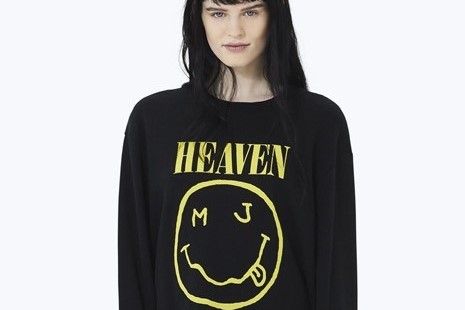 The copyright battle between the designer and the band rages on

Cast your mind back to the end of 2018, and you might recall the moment Nirvana announced they were suing Marc Jacobs for plastering their signature smiley face emblem all over his Bootleg Redux Grunge collection.

In response, Jacobs got his legal team on the case, with his lawyers denying any similarity between the two graphics, and claiming he had full support from both Courtney Love and Frances Bean Cobain. Not only were the two gifted pieces from the Redux offering, Love was also invited to perform at the line’s launch party in Los Angeles, and commented enthusiastically on an IG photo of Jacobs wearing the tee.

Then, in September, the case took another twist, as artist and graphic designer Robert Fisher came forward to claim he was the one who came up with the iconic smiley.

While Fisher is not seeking payment for the emblem’s use across the course of the last three decades, he did file a motion to intervene in the ongoing case between Jacobs and the band, in a bid to claim ownership and authorship of the design. “I don’t think it’s fair that they try and take out a copyright and say Kurt did it,” he told the LA Times. “Since I drew it, I want to be known as the guy that drew it. It’s as simple as that.” Nirvana’s legal team deemed Fisher’s claim “factually and legally baseless”. Keeping up? Here comes more.

Now, Jacobs’ lawyers are arguing that, since Kurt Cobain seemingly did not design the copyrighted logo as was previously understood, there has been no infringement. They also continue to push the idea that Jacobs’ version of the emblem has been suitably altered so as not to bear much similarity to the original – namely through the removal of the face’s ‘X’ eyes and their replacement with Marc Jacobs’ initials. Add to this that Nirvana drummer Dave Grohl reportedly testified that he did not know who created the X-eye smiley face, and… well, the plot thickens.

With the case postponed until 2021 due to the coronavirus, Jacobs’ legal team are now pushing for a summary judgement to be made – which means a decision will be made before it actually has to go to trial. “It’s ironic how much trouble a smile can cause,” lawyers told a Californian federal court last week.