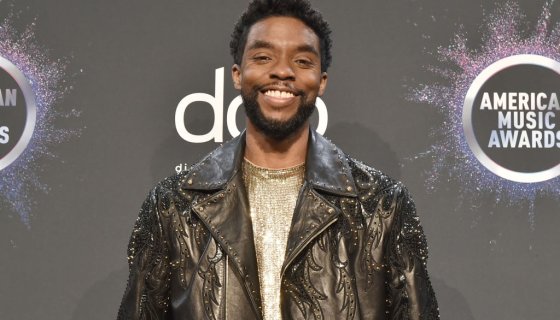 has captured the hearts and minds of movie fans from around the world due to his portrayal of heroes both imagined and those who existed in the real world. However, many of those fans are aiming their concern over the star’s thin appearance in a recent Instagram video.

The 42-year-old actor announced his partnership with Operation 42, a new initiative launched by billionaire businessman and film financier Thomas Tull and in partnership with FIGS, a female-founded medical equipment company.

Yesterday on Jackie Robinson Day (April 15), which is the day the legendary baseball player broke the color barrier in Major League Baseball, Boseman shared that he’s joining Tull’s effort to provide relief to Black communities suffering under the weight of the pandemic.

“I am hearing stories of desperation from people all over the country, and we know our communities are suffering the most and urgently need help. Celebrating #JackieRobinsonDay with the launch of Thomas Tull’s #Operation42, a donation of 4.2 million dollars in personal protective equipment (PPE) to hospitals that service the African American Communities who have been hit the hardest by the Covid-19 pandemic,” Boseeman wrote in the caption of the video, which shows him wearing Robinson’s #42 cap.

Boseman, who has never been a large man, sounded like himself but fans on social media couldn’t help but notice how much smaller he appeared in comparison to his role as Robinson in 42 or as King T’Challa most notably. Some are assuming that the actor is preparing for a role, which doesn’t add up since Hollywood is pretty much shut down. Some think he might be fasting for health reasons.

Either way, Make Him A Plate Twitter is losing their minds and we’ve got those reactions below.

I am hearing stories of desperation from people all over the country, and we know our communities are suffering the most and urgently need help. Celebrating #JackieRobinsonDay with the launch of Thomas Tull’s #Operation42, a donation of 4.2 million dollars in personal protective equipment (PPE) to hospitals that service the African American Communities who have been hit the hardest by the Covid-19 pandemic. Thank you, Jackie, for refusing to accept the world as it is, for showing us that we can make a difference.

Legit concerned for Chadwick Boseman.. Please tell me this is for a role because my mom instincts got me in the kitchen for him like.. pic.twitter.com/zfVIV6WWiv

Me when I saw why Chadwick Boseman was trending pic.twitter.com/KJ4YWKMRy1

I need black twitter to do its job and find out why is Chadwick Boseman is so thin. I started to cry looking at him #chadwickboseman pic.twitter.com/GSZrcuiixE

Chadwick Boseman is definitely on his 50 Cent shit pic.twitter.com/aNlznQwA6k

I think Chadwick Boseman is just naturally a skinnier guy and just gains weight for certain roles. Here’s a pic of him from 12/2019. Overall I don’t think he wants his Instagram flooded with comments telling him to eat some food 🥴 pic.twitter.com/maK7UpLiwt

Baby I don’t know what he did with that Marvel check but he sure didn’t buy food. I swear if somebody don’t go and feed Chadwick Boseman. pic.twitter.com/sVf3VQcwXl

Chadwick Boseman might have found something other than vebrainium in Wakanda. pic.twitter.com/LmSKixZKZy

I thought Chadwick Boseman got the rona, but he is just on a Wakandan diet. pic.twitter.com/MMztgm1g21

Is Chadwick Boseman ill? His drastic weight loss is worrisome.

Did Chadwick Boseman lose weight for a role??? He looks sick. pic.twitter.com/SLbw5KbyaS

Chadwick Boseman posted a video on Instagram and these are the comments 😭😭😭 pic.twitter.com/Od96bCKwWo

Y’all.. Is Chadwick Boseman ok??
Is this for a movie?
I’m concerned! pic.twitter.com/P68Kn0x63c