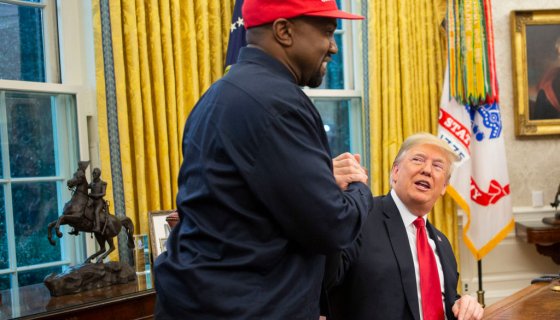 Kanye West is running for President in 2020. At least, that’s what Yeezy declared today (July 4) on his Twitter feed.

We must now realize the promise of America by trusting God, unifying our vision and building our future. I am running for president of the United States 🇺🇸! #2020VISION

The Chicago producer made a return over a week ago to and share content (like his never released “Spaceships” video). Apparently, his political aspirations are also part of the deal.

“We must now realize the promise of America by trusting God, unifying our vision and building our future. I am running for president of the United States! #2020VISION,” tweet West around 9pm ET on this July 4 holiday, for some.

He’s been trending every since. But knowing Kanye West and his occasional tendency to troll, his announcement is getting the side-eye on these Internets. There is also the fact that he’s been . And also, we can’t forget to mention how absolutely out of his depth he’s when speaking on socio-political issues. Yeezy’s hasn’t improved much.

But hey, maybe he’s getting financial backing from his homie Elon Musk? Nah.

When you go to your boys house and you’re both wearing orange 🍊 pic.twitter.com/IyPOdEKaVY

So with that in mind, we’re calling shenanigans. But really, the lack of a follow-up tweet with say a platform or info about where to donate to the Yeezy 2020 campaign is the first inkling of the jig.

We’re not the only ones, peep some of the most poignant and hilarious reactions below. The jokes are going to be ringing off for a while…

call it a late registration

@ Everyone saying it’s too late for Kanye to run for president pic.twitter.com/QC7VGo9JKy

me and the homies rolling up to the polls to vote for kanye pic.twitter.com/h31nSKfzvs

Nah if Kanye West becomes President he’s honestly completed life. A legend in music, a force in the fashion industry, a billionaire, and now a whole PRESIDENT? Bruh… BRUH.

This is like Biden convincing David Duke to run for President.

Literally any idea Kanye West has ever set his mind on, he accomplished! so I honestly believe we will see him as the president one day.

kanye west is running for president….which could make kim kardashian the first lady…i want OUT of this country no joke pic.twitter.com/53BwHpW9PM

The entire United States when they need to choose between Joe Biden, Donald Trump, and Kanye West pic.twitter.com/GiVOQpDEpK

Me finally realizing that Kanye West pulling a Ross Perot and runs for President will only split the votes that would’ve went to Joe Biden and secures Trump another presidential term…..pic.twitter.com/HEcdyut2TE