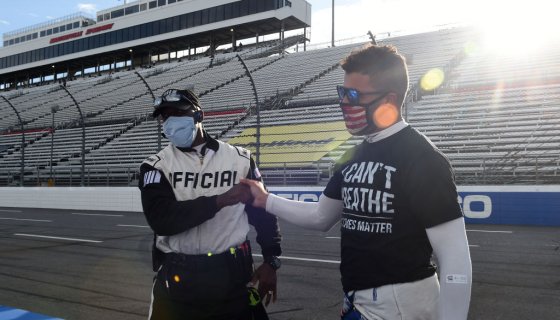 NASCAR introduced plans to promote diversity within the sport, giving drivers like opportunities to not only flourish on the track but also take a stand for social justice. A white driver who expressed discomfort over NASCAR’s ban of the Confederate Flag and allowing peaceful protesting has motivated him to quit the sport.

As reported by CBS Sports, Ciccarelli, a 50-year-old racer from Ellicot City, Md., voiced his frustrations in a Facebook post stating that he would quit NASCAR after the 2020 season due to the organization’s embrace of kneeling during the National Anthem, and the ban on flying of the Confederate Flag, long seen a symbol of hate and division among African-Americans.

Well its been a fun ride and dream come true but if this is the direction Nascar is headed we will not participate after 2020 season is over , i don’t believe in kneeling during Anthem nor taken ppl right to fly what ever flag they love. I could care less about the Confederate Flag but there are ppl that do and it doesn’t make them a racist all you are doing is f—ing one group to cater to another and i ain’t spend the money we are to participate in any political BS!! So everything is for SALE!!

Ciccarelli’s stance on the so-called politics entering NASCAR sound just as tone-deaf and lacking in understanding similarly to those made by in regards to kneeling during the flying of the American flag.

Ciccarelli races part-time in the NASCAR Gander RV & Outdoors Truck Series division, with just one top-10 finish and neither wins or poles.