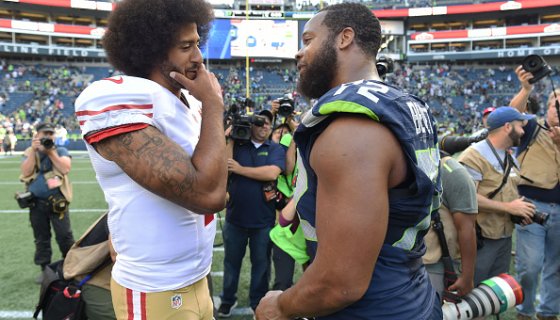 When Colin Kaepernick sacrificed his professional career in the name of social equality the majority of the country turned against him. Now even the is changing his tune about him.

As spotted on Deadline Donald Trump is now addressing the former quarterback with some more empathy. This week the petty politician was asked about the Milwaukee, Wisconsin native during a brief question and answer segment at The White House. Scott Thuman of WABC TV asked him about his thoughts on whether Kaepernick should be given a chance to be back in the NFL. Surprisingly he wasn’t as harsh as he has been previously saying “If he deserves it.”

But in signature Trump fashion he took a jab as he closed out the question. “If he has the playing ability. He started off great, and then he didn’t end up very great … as a player”.  went into specifics regarding his career. “He was terrific in his rookie year and then I think he was very good in his second year and then I think something happened, so his playing wasn’t up to snuff. The answer is, absolutely I would. As far as kneeling, I would love to see him get another shot, but obviously he has to be able to play well. If he can’t play well, I think it would be very unfair.”

His response aligns with the league’s Commissioner Roger Goodell who recently gave teams the green light to sign Colin. “Well, listen, if he wants to resume his career in the NFL, then obviously it’s going to take a team to make that decision. But I welcome that, support a club making that decision and encourage them to do that” he explained.

You can video from Trump’s press conference below.

"Absolutely I would," support @Kaepernick7 getting a 2nd shot in the @NFL — @POTUS in my interview today on racism, policing, statues & yes–sports. #ColinKaepernick pic.twitter.com/0B83cNbesW