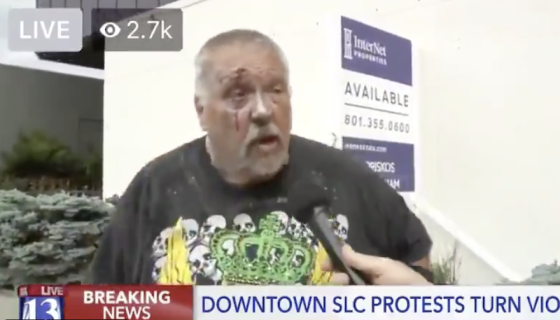 A man in Utah who may or may have not been trying out for a spot on the Avengers failed miserably. Said man broke out a bow and arrow during a protest in Salt Lake City, Utah and began pointing it at people—and he was inevitably and justifiably greeted by the hands and feet.

We don’t know the name of his individual, and by the end of this tale, it should be obvious that no one should care.

Yesterday (May 30), footage began hitting social media of an older man in the middle of the street in Salt Lake City. He could be heard yelling “All Lives Matter” and considering it was a protest for George Floyd, it let’s us know where he stood in all this chaos.

But the kicker was that he had in his hands a bow and arrow. Then he had the audacity to start pointing it at people. And this is where he f*cked all the way up. He proceeded to point it at someone, and the crowd reacted by proceeded to bless him with the most proper of fades. We’re talking hands and feet. One dude leaped onto the car hood to get his licks in.

And they weren’t done with the just him. The crowd proceeded to light his car on fire.

Sometime afterwards, the non-victim was interview by a TV reporter. Struggle Legolas said he came down to support the police, but did mention he wasn’t with the bad ones. He also proceeded to lie his ass off at to why the crowd decided to beat the crap out of him. He did make sure to mention that two Black guys punched while he was in the car.

This is where it must be noted that he caught the hands while he was standing outside of his vehicle and that it was multicultural milieu of people beating his ass. The “All Lives Matter” jig had nothing to do with it, it was pointing a deadly weapon at people.

Lmao he said 2 black guys beat him up when he got jumped by 14 white kids pic.twitter.com/rM5UQLmnfH

Peep some reactions below. Get him outta here.

Hawkeye and Professor X done had a rough week pic.twitter.com/pDh9TKbWwX

this protest got hawkeye, blackwidow, and ironman LMFAO pic.twitter.com/mA3pvWqCiu

hawkeye harold and rolling jeniffer getting exactly what they deserve. pic.twitter.com/Ik9WPsyQ6e

Nobody told him to act like Hawkeye from Avengers and launch an arrow into the crowd. When you do clownery, the clown comes break to bite. https://t.co/JBjvpmtcvB

dude thought he was hawkeye and ended up without a car lmfaoooooo love to see it https://t.co/4YmiaDB1KR

Also, mans lied about the sequence of events. He came out the car with a weapon and was aiming it at people, so of course they beat his ass.

They didn't do it because he said "All Lives Matter".

Brandon McCormick from Salt Lake City, otherwise known as All Lives Matter Hawkeye: “They beat me through my open

That guy trying to use a bow and arrow on the protestors has me dying. Hawkeye really sold this brudda some dreams 😭😭

Imagine pulling up to a riot screaming All Lives Matter getting an arrow out like Hawkeye & you get battered but like 30+ people & missing all your arrow shots? Dkm, Marvel movies sold him dreams man, moving like Lacazette in front of his target 😭

Here is is lying that he said it from his window & never mentioned his weapon was a bow aiming at people. pic.twitter.com/DsnUy2Os4i

Real concerned about his phone…mentioned it at least 3 times……funny how he neglected to mention his Hawkeye wet dream moment beforehand to give just a liiiiitle bit of context. He personifies the exact problem. Cause a problem, exacerbate it, then play the victim.