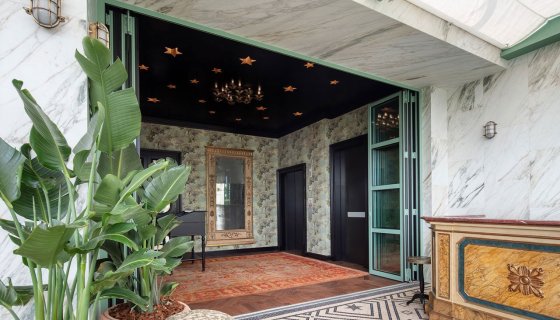 It is time to start shining your belts. The Italian brand has opened an eatery in one of the poshest cities in the world.

As spotted on Hypebeast the luxury apparel company has launched its first dining establishment in the United States. According to the article the property is an extension of their Florence, Italy outpost Gucci Osteria. Located in Beverly Hills Gucci Osteria da Massimo Bottura opened on February 8.

It is reported that this new venture lives up to Gucci’s signature opulence with decor fit for a king. This includes marble, imported tile and velvet detailing. Sitting atop Gucci’s Rodeo Drive retail store patrons will be afforded stunning views of the Los Angeles skyline. In terms of the offerings award winning chef chef Massimo Bottura curated the menu in an effort to fuse classic Italiano with feel good Americana.

The ‘Pigeon Garden’ is a newer dish, brought in to better represent the seasonal calendar of ingredients in Italy. The #GucciOsteria kitchen uses produce that is in season locally meaning that ingredients travel a smaller distance, ensuring greater flavour and fewer food miles, a key ethos of Head Chef Karime López @karylomt. Seared pigeon is the focus of the dish, served with a small salad with Tuscan herbs and a small aspic of pigeon ragout. Illustration by @ryutomiyake. @gucci

The restaurant had a soft opening over Oscar weekend but will officially open up to the public on February 17 with only room for up to 50 guests at a time. You can find more information on Osteria here.