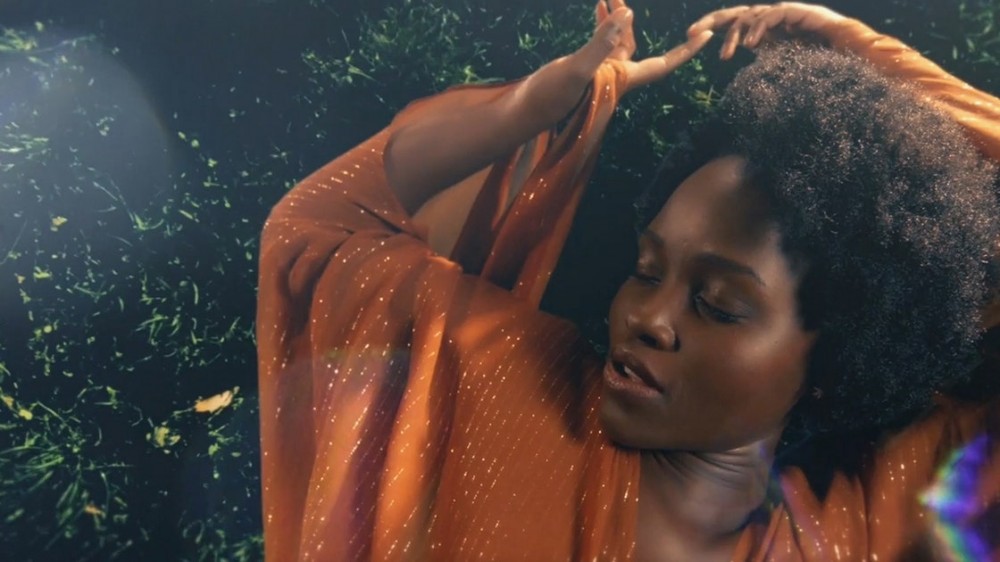 In the new music video for Los Angeles-based musician Jonathan Singletary’s single, “Never Like This,” Lupita Nyong’o plays a winged angel who rises to the clouds from earth. In a glittery two-piece outfit by Sai Sankoh, she looks ever so ethereal as she floats on by. “I’ve been high before, but never like this,” the singer Adeline, who is featured on the track, croons in the chorus. “It’s like a drug trip, but it’s really a love trip,” says Singletary. “It’s this out of body experience; transcendent love that takes you away from your current circumstances. When you feel that way, it can truly make you feel like you’re flying. You’re able to see the world from a higher, and even heavenly, perspective.”

Singletary wrote the song before the pandemic, but the themes of intense love and human connection have taken on a special meaning over the past year. “I’m a very spiritual person, so I believe things get deposited into our spirit for the time we’re in, but also for the times to come,” he says. Raised by a choir director mother in San Francisco, Singleton found himself drawn back to the sounds of soul music and classic love songs during the pandemic. He wanted to capture this in the new track. “I grew up on classic love songs and organic live instrumentation,” says Singletary, who in the past was also the lead singer of the band Harville. “During the pandemic, there’s been this theme of returning home, and for me, it’s forced me to return home musically. I started diving back into soul music from Marvin Gaye, the Isley Brothers, Earth, Wind & Fire.”

Impressively enough, the video was shot, directed, and edited by Michael Joseph McQuilken in a Brooklyn apartment in one single day, with Jennifer Harrison Newman on hand to choreograph and Dede Ayite to style. Nyong’o’s appearance happened by chance. Singletary’s wife, Elaine Welteroth, is good friends with Nyong’o, and the three of them all started talking about the song during a random encounter in upstate New York last year. “There was a huge storm and a blackout, and Lupita’s place had a generator, so she took us in as a place of refuge,” says Singletary. He ended up playing the song for her, and she instantly fell in love with it and suggested that her friend McQuilken direct it. It was McQuilken who then eventually persuaded Nyong’o to star in the video as the angel. “In a challenging year, I found refuge and inspiration in ‘Never like This,’” says Nyong’o. “The song offers a healing power, that lifts you higher if you let it. You can feel Jonathan’s genuine intention to both invite us to escape, while connecting us through his music. I was delighted to play a role in the visual manifestation of his song.”

Singletary will also be hosting a special meditation on love and kindness on his Instagram today, with special guest appearances from Nyong’o, Welteroth, Manoj Dias, and more. (He’s been hosting his Piano & Prayer series every Monday as well). More music is also on the horizon. “I’m planning to release an EP at the end of the summer, and a couple singles coming up,” he says. “There will be more songs about love, healing, and being vulnerable. I want people to feel seen and loved by talking about the difficulties in this world, and being Black in this world. Encouraging people to just love each other more.”

Above, watch the new video for “Never Like This.”