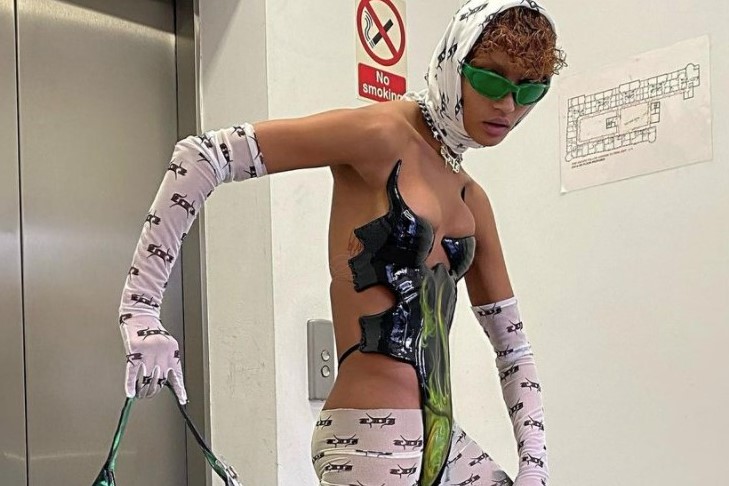 Luis de Javier grew up in Sitges, Spain’s infamous gay hotspot. At least, it’s gay during the summer, when its picturesque beaches reverberate Katy Perry anthems and there’s budgie smugglers and tinnies as far as the eye can see. The rest of the year, it’s a dormant coastal town not too far from Barcelona. However, it was only when de Javier travelled to London in 2018, that he truly found his queer community. After all, he came over for two things: firstly, to rave and secondly, to study fashion at Westminster.

Betsy Johnson, a Grimsby native, was the first person de Javier bonded with when he moved to the capital. They met in the place countless great friendships are made – a sweaty club bathroom, where they spent the night tucked away in a cubicle smoking cigs and blowing rings into the toilet bowl. Today, they stand together as the creative force behind de Javier’s namesake label, and after a “whirlwind of blood, sweat, and tears”, they debuted their first LFW collection in early 2020.

Then, two weeks later, the world went into lockdown. “We finally took the risk to start on this journey and then that happened straight after? Fuck me,” de Javier says. “I’m not gonna lie, I was so stuck, all I did was sleep and eat. But I quickly snapped out of it and dove into all the creativity that I had been neglecting.” So, de Javier and Johnson got to it, working away between Buffy reruns and Lord of the Rings marathons, to create the brand’s sophomore collection.

What was on the line-up? Think g-strings, low-slung leather trousers, gauzy body stockings, and asymmetric dresses, hoicked and sliced at the leg. De Javier’s tutelage under Gareth Pugh and Vivienne Westwood comes through, too, by way of snatched corsetry and 3D-printed bodices, which provide structure for the label’s signature horns to spiral out from – as if Maleficent had wound up in a Tottenham warehouse rave. Or, a queering of the Spanish fighting bull, if you will.

Titled Madre, Hermana, Amiga (Mother, Sister, Friend), the collection marked de Javier’s first foray into womenswear, “an homage to every single woman in my life and how they have shaped who I am today” the designer says. And at the centre of this, is Georgia Palmer, model and muse, who stars in a new SS21 film, launching today. “She is the literal walking message that I try to evoke through every design. She’s a strong, powerful, independent boss ass bitch with a heart of gold”. “We actually used to live together,” Johnson adds. “So we shot the video in our old warehouse, like the last creative farewell to a space that brought us together.”

Filmed under sheets of plastic in their living room, it was a scrappy, DIY job forged out of the strictest of lockdown restrictions. Not that you could tell, though, as Palmer writhes, freeze-framed under strobe lights and billowing plumes of smoke to a techno beat produced by friend and collaborator, LSDXOXO. If there’s one thing the duo have learnt over lockdown it’s to only “do work because you love it. Do it because the world needs to take something from it. Do it in your own time and do it with people you love”.

That being said, de Javier is gagging to put on a show. “It’s one of the main reasons I want to keep doing collections, to create that whole performance moment and draw everyone in the audience into my world – fingers crossed we’ll get to have beautiful creatures strutting down the runway in corsets and thongs soon,” he says. Until then, take a look at Luis de Javier’s intoxicating SS21 flick in above.