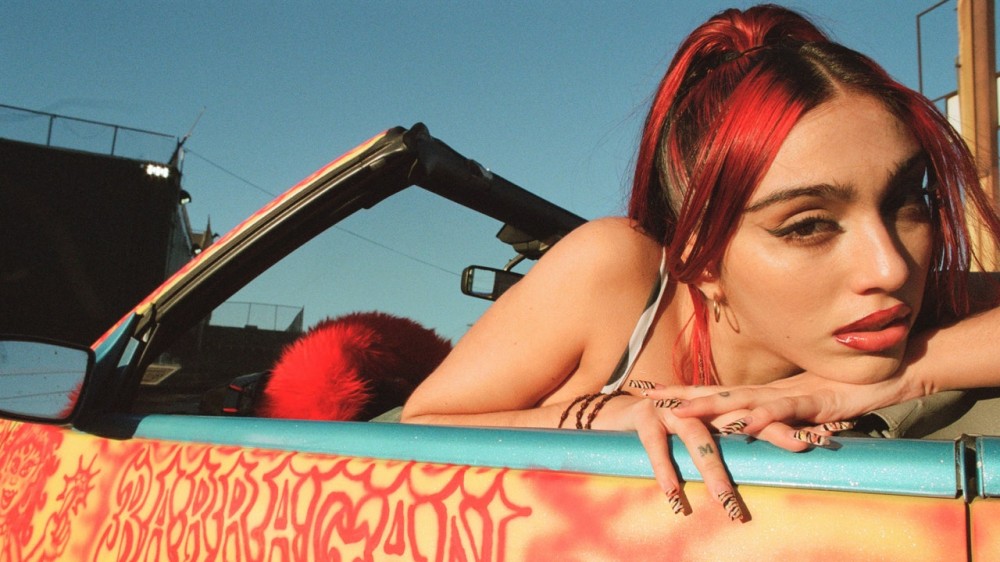 Mexican designer Victor Barragán’s latest lookbook is a delicious tale of a stylish peeping tom and the object of his affection played by Lourdes “Lola” Leon. Shot by photographer and director Mayan Toledano, the erotic-thriller shows Leon being spied on, changing into raunchy-chic looks to indulge her peeping tom, played by the artist Ally Bo. Early on, she holds a flip phone in a denim jacket and a blonde wig that is spray-painted with the label’s logo. The plot thickens when she’s on a pink bed in a seedy hotel, blatantly posing for the camera and the viewer behind it while wearing a fringed purple and blue dress, and the lookbook culminates at a staged murder scene, where she’s in a barely-there literal red bandage dress.

Barragán and Toledano were inspired by old ’00s music videos like Foxy Brown’s “I Can’t” and J. Lo’s “If You Had My Love”, as well as local Mexican television shows. “There is some irony mixed with telenova [soap opera] vibes about being extra and dramatic that we reflect in Barragán,” says the designer. “This type of sense of humor is the reflection of Mexican TV culture that we had in our DNA and we enjoy playing with it in our art direction.” Toledano also thought of spy themes and references, including the erotic thriller Body Double by Brian de Palma. “The film is about a guy who spies on a woman and becomes increasingly more obsessed with her,” says Toledano. “With Lola, I wanted to switch the roles a bit, so she learns that she’s being spied on and plays the part for it, to her own pleasure.”

These kinds of shoots aren’t necessarily new. Back in 2018, both Balenciaga and Yeezy used paparazzi to shoot their lookbooks, as did Tim Walker for Vogue Italia’s September 1999 issue. But this style of voyeuristic photography, spurred on by being homebound and tied to our phones during the pandemic, makes sense right now. “The images we see online today are reflections of how people want to see themselves,” says Toledano. “We consume everything on our phones.”

For two days, Toledano and her crew worked to shoot the project at a motel on Long Island. The series of photos, which is accompanied by a short clip, tells a story through the clothing. Each change of clothes is supposed to be a new disguise and persona that Leon’s character takes on. At one point, in pure, sexually liberated Barragán-style, she wears a pair of denim shorts that aren’t actual fabric but are instead painted on her body. “I think Lola emotes the same energy as these women in the music videos and in the film who are being surveilled and constantly pursued by men but reclaim the voyeurism to her own power and confidence,” says Toledano. “She’s someone who is in control of her own gaze, in real life and in front of the camera. Lola was really easy to switch between the different characters we gave her, it was both playful and a fantasy version of who she really is.”

Bo is dressed in an amazing rotation of sleazy Barragan looks, which includes rimless glasses, oversized suiting, and a fistful of man jewelry. In one instance, he wears a hulking pair of star-printed clown boots. They signify an ultimately fun philosophy that is a fundamental part of Barragán. “We explore the idea of humildad [humility] in this season with a decontextualized version of what being a ‘clown’ means to us,” says Barragan. “We shouldn’t take ourselves seriously and fashion should be about having fun with a positive message.”