“How many Mexicans are here tonight? I mean, here on this unforgettable afternoon?” said Mario Quintero Lara, who stood front and center at Coachella’s main stage last Friday. He’s the frontman of the legendary banda ensemble Los Tucanes de Tijuana, who in 2019, became the first-ever norteño ensemble to perform at Coachella. Greeted by thousands of festival goers — a sea of colorful faces, of many ages, races, and persuasions — Los Tucanes opened Weekend One by stoking the biggest and most unlikely Mexican quebradita dance-off the California fest has seen in its 20 year history.

It’s a stark change of scenery for the mustachioed legends, who usually play the nightclub circuit, among the working-class Latinx communities of the U.S.-Mexico borderlands. Formed in the late Eighties, in the city of their namesake, the five-piece group were famed for their energetic banda and corridos that have resulted in many a quinceañera and alcohol-fueled reverie. Some of those songs, known as narcocorridos, would chronicle druglord dramas, including the exploits of guys like El Chapo — which in 2009, got them outright banned from performing in Tijuana. “In general narcocorridos, not only ours but those of all groups who interpret them, reflect a reality in which we have NO participation,” wrote the band in a statement. “We don’t share in it nor defend it. They are about facts in public knowledge, involving news and persons that are a part of everyday reality.”

Apart from being banned from their hometown, Los Tucanes are best known for helping lead the norteño music explosion of the Nineties and early aughts with danceable hits like 2002’s “El Tucanazo” and 1994’s “La Chona” — which recently experienced a renaissance as a viral social media challenge. Dubbed the “La Chona Challenge,” the song inspired those bedecked in norteño gear to jump out of their slow-moving vehicles and dance to the upbeat polka-styled song on foot. During Los Tucanes’ Friday set, the band regaled their fans with not just one performance of “La Chona,” but two. Rolling Stone caught up with bandleader Quintero backstage to discuss this crucial moment for norteño music, as well as Latin music. “Today was a historic moment for us, for our genre,” Quintero told Rolling Stone. “I hope that we continue to have these kinds of opportunities, and for [those] doors to open to everyone.”

What are your thoughts on being the first band to represent norteño music at Coachella?
We are grateful to God and to our audience for allowing us to make history. We thank the festival for giving us the opportunity to be here and to represent our genre. But we also thank all the people that found a connection with our music. We were very nervous but it was all worth it. I think we accomplished our goal of making people dance, and that’s unforgettable. We are very happy to bring our culture, our norteña, and to have the opportunity of being the first norteña band to play at this grand festival.

What did you think about your audience today, and how were they different from your usual performances?
The truth is that it was very different, but also very emotive. It’s an audience who loves to enjoy themselves, and who loves upbeat music. That was the idea — to deliver [all kinds of] dance-worthy songs, which we don’t just do at our regular Tucanes shows. We play a bit of everything. Today, we aimed for a more active setlist, and to achieve that interaction with the public. We were happy to see the audience dance and jump around. It’s an audience we are really starting to enjoy. 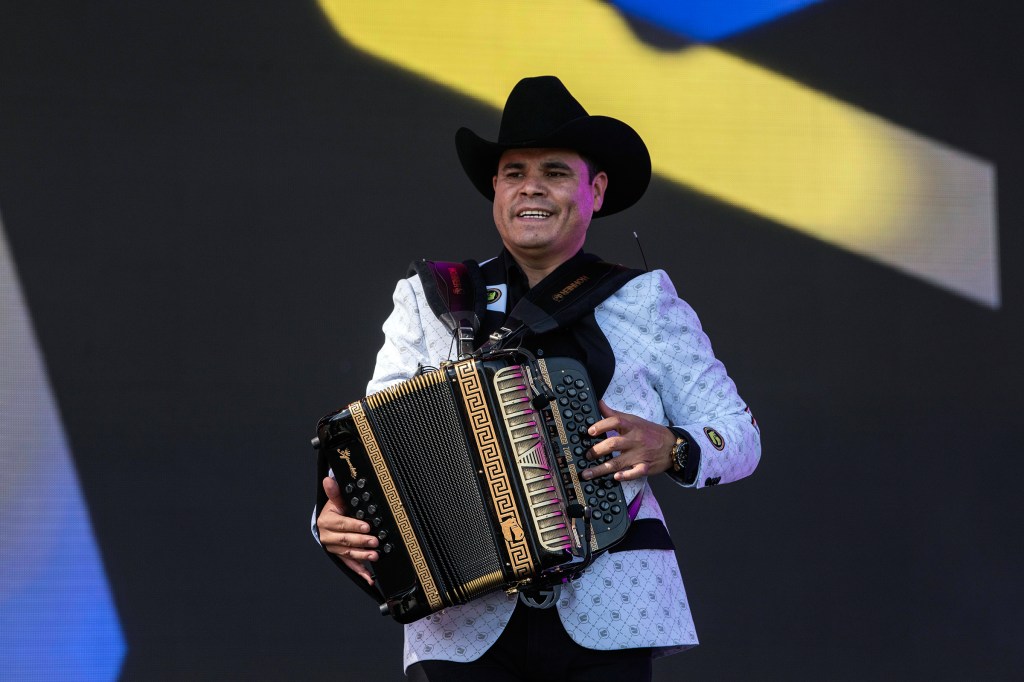 The city of Coachella honored the moment too, by awarding the band with a key to the city. What does this mean for you?
We have a lot to thank the city of Coachella for inviting us play the festival, [as well as] the mayor Steven Hernández for the opportunity, and for making us feel welcomed with the key to the city. Thirty years ago, we visited Coachella for the first time. We came knocking on doors, and we managed to play at a few nightclubs. But we never imagined reaching a festival like Coachella. Above all, that one day we would be granted the opportunity to be the openers at the main stage, which is impressive to us. I have a lot of family and friends here, and also a lot of people here who enjoy our work. It’s an honor as a Latino, as a Mexican, to be at this festival and receive the keys to this city.

Regional Mexican music has a huge following in the U.S. But what’s largely considered Latin pop is reggaeton and trap. What are your thoughts on this?
In any way you see music, it’s important to know that music is to bond to and not to compete. It’s about complimenting each other, which I think we all do. The most important thing is for our cultures to grow. I had the opportunity to go Russia, and it was very thrilling to hear Latin music on their radio stations. It was mainly reggaeton, since regional Mexican music hasn’t made it there quite yet. But I think that with trap and reggaeton, the doors are opening for more styles within the genre of Latin music. I think that more regional music will be entering these types of festivals. We were recently at the Pa’l Norte festival in Monterrey, Mexico, then in Mexico City’s Foro Sol, and today we are here. Regional Mexican music is also growing with new social media platforms. It’s giving our genre more exposure that it did not have before. I think that if we all continue to unite, we will continue to be offered these kinds of opportunities. Today was a historic moment for us, for our genre, and I hope that we continue to have these kinds of opportunities, and for doors to open to everyone.

What about the “La Chona” Challenge that went viral on social media?
“La Chona” Challenge has a lot to do with it, because the song went viral worldwide. People have embraced it, and they’ve added it to their favorite playlists. It all happened organically and the song spread all over the world. “La Chona” invaded, bendito Dios, and I say this with great humility, but also with great emotion because it took us to places we never imagined.

Mexico banned your music a decade ago, but today you took the Coachella stage.
That’s correct. We always dreamed about reaching what we’ve accomplished today, but we never imagined it would come true. We knew of the Coachella festival, and we also new that there wasn’t an opportunity for us to play there because of our genre, and the type of event that it is. It was always on our mind and a part of our goals. It arrived a lot sooner than we thought. When we got that call, saying “Oye, you are confirmed to play Coachella!” We couldn’t believe it, we were so nervous. I think the goal was achieved.

Los Tucanes will return to the Coachella Stage for a Weekend Two performance on Friday, April 19th at 3:20pm. This interview was originally conducted in Spanish.