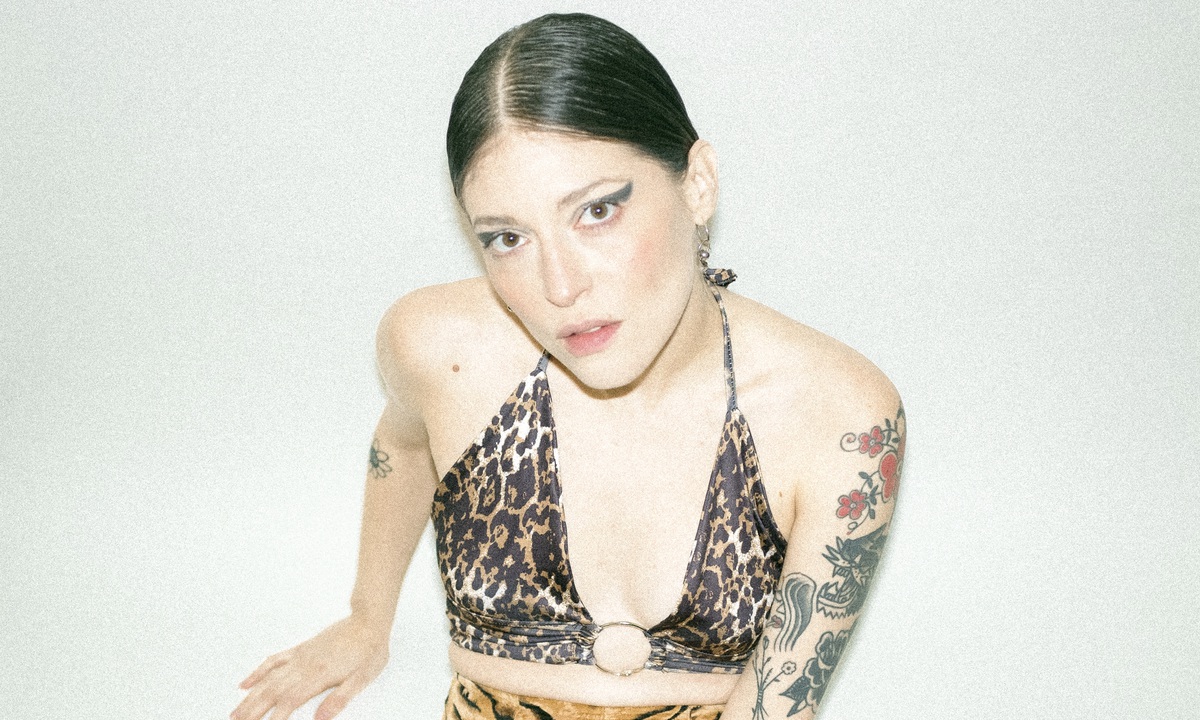 Performing live is central to Lola Pistola’s artistry. The New York City-based Puerto Rican dedicated so much time to playing shows last year that when people asked when physical or digital copies of new songs might be available, she’d say, “I don’t know. One day.”

It was only 2019 that she debuted her LP, Curfew. Still, people were asking—but she wanted to focus on playing shows, seizing every gig possible.

Then, COVID-19 came and brought with it the necessary and immediate dissolution of concerts; no more crowds until further notice. That’s when Lola–born Arvelisse Ruby–and her partner and bandmate, Robert Collum, realized it was time to work on an EP–and so was born Lizard, released yesterday (Thursday, August 27).

“As soon as I got laid off this year from work, and my first money from the government came in,I was like, oh shit: I’m just going to not eat food and pay for music,” she tells Remezcla. 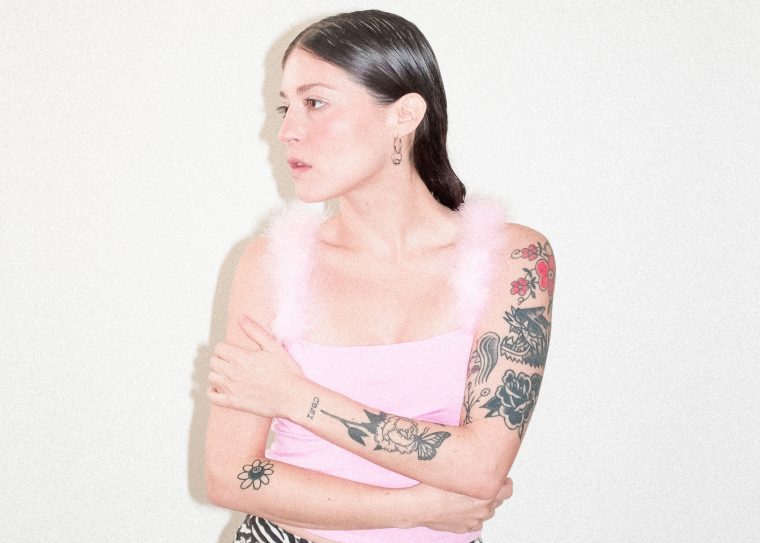 Photo by Robert Preston Collum. Courtesy of the artist.

Lizard being finally out is a result of Lola’s days having been freed up, spending less while she quarantines and the good fortune of having begun to receive unemployment in a timely manner–unlike so many other New Yorkers, as well as people across the United States and Puerto Rico.

Early on in the pandemic, she was let go from the flower shop where she worked. The business has since received funds needed to avoid shuttering, but remains financially unable to hire back employees. She also served as a bartender, and while some workers of the restaurant and bar industries have returned amid New York’s cautious reopening, Lola opted out: Those who, unfairly, have yet to receive unemployment, or can’t receive it all due to citizenship status, may need the work more than she does.

Adamantly frugal, Lola had saved some money made at shows. At last, Lola had the funds and the free time to get this batch of songs, recorded back in 2018, professionally mixed and mastered.

“This is the real emergency for me: I need to pay for my music,” she says. “I would much rather lose anything that I have here than not have the music out, or art out, if that makes sense.”

Our world has turned inside out since the conception of its songs, but the entirety of Lizard has aged well. It’s a bittersweet outcome, of course.

Particularly as COVID-19 swelled in cases, as the world began to better understand the gravity of the pandemic, Lola was “glued to the phone,” she says, looking for information in hopes of satiating that need for answers, for solutions. “Aside from that,” she adds, “the political climate is so toxic, it’s affecting everyone in the U.S. and Puerto Rico, people worldwide. The ball was rolling too much.”

Couched inside the urgent riffage of the title track, “Lizard,” is an oft-asked question: Are we so connected to our screens that we are disconnected from reality? For Lola, this query also includes societal norms and expectations period because, at this point in the evolution of technology’s integration into daily life, we are expected to be screen-attached.

“It’s about following the system that has been created for us,” she says. “You have this [voice] in the back of your head, like you need to do this or that, and it’s like, just tell me where to go, Lizard Man.”

A metaphor for the status quo, this lizard man has Lola constantly questioning herself: At 32, should she be married with kids by now? A career in a more traditional sense? She must have a daily routine, at least–a normalcy that includes a set time for dinner then bed. Why did she leave Puerto Rico for New York, anyway? To follow a dream she shaped based on the timeworn, stereotypical–yet rarely achieved–big city success story? Her parents back on the island, she says, add another layer of doubt: “Ay, dios,” they say. “¿Por qué haces eso? Why don’t you get a normal job?”

She regularly fights, and generally overcomes, any uncertainty, though.

“I want to live my life and just do art and be conscious and have intention to what I do, then you have the people who don’t understand because they’ve been following the system,” she says. “But I’m totally happy. I’ve made my life what it is. I’m happy with my path, I’m happy with the way I see the world.”

The patriarchy, thriving under the system over which the Lizard Man lords, is the target of “S.M.H.T.C.,” through the lens of mansplaining specifically. It’s another hulking track where Lola screams with eardrum-piercing ferocity.

New York bars are a fertile ground for mansplainers. Lola’s had too many degrading, irritating, and invasive experiences to count; you can hear how they’ve accumulated, congealed, in her many growls, like intensely angry eye-rolls.

The patronizing, misinformed “but you don’t look Puerto Rican” phrase is a recurring mansplain for Lola. These men are basically telling Lola, who is a white Latinx, that she’s somehow gotten her presentation wrong: “You don’t look like J.Lo,” goes another condescending confusion.

After having heard it so many times, she says, her reaction is mainly this: “I get it, you’re dumb, you don’t know things, and that’s really offensive. But I’m not going to fight you. Here’s your change, now get out of my face.”

The slow-burning “Nothing Matters” harkens back to “Lizard,” with its reminder that really, what’s most important in life is experiences, your intentions, what you do with your life–not what you curate as your social media persona. 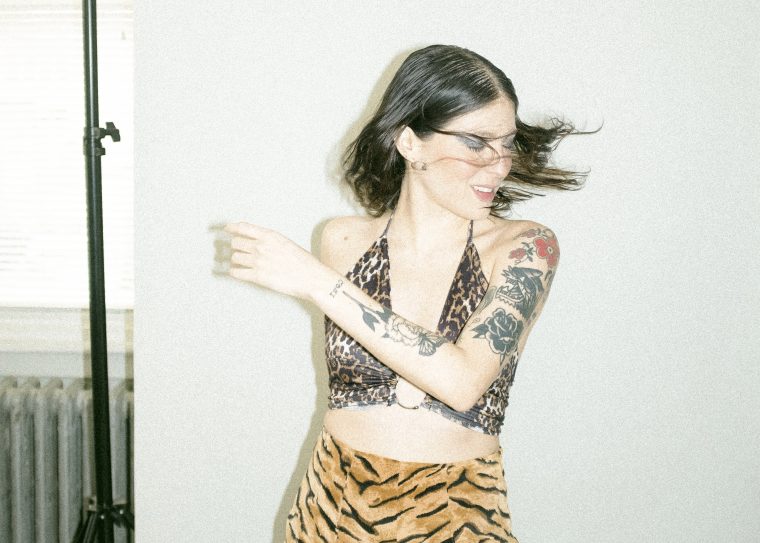 Photo by Robert Preston Collum. Courtesy of the artist.

“The only thing that matters is that people are having to stand, people are tired of being puppets of powerful people who are in power don’t have the notion or the need to understand the public and help people,” she says. “ Your ads on Instagram don’t matter, your shit on Facebook don’t matter. Your friends matter, your family matters. The place you were born matters. Your experiences matter. That’s what matters. Everything else? It don’t fucking matter.”

She recognizes some deep connections do come by way of socials, like the handful influencers who are genuine and stand for all kinds of positive change, and that social media can also be a vital tool in protest and social justice work. That these are screen-based is not the issue, really. It’s more about the virtual version of small talk. (She also despises IRL small talk.)

“The human connection is what matters,” she says. “Even if it’s through your phone.”

Connecting again to another song is “Dream City,” where the “New York dream” is, once again, dissected at Lola’s discretion.

Sometimes she sounds disillusioned, but there’s also a sense that she’s figured out why and how to fix it. Intention is key, she says. “The older I get, I just feel like everything I want to do should be meaningful.”

Last year, Lola played the songs on Lizard live quite frequently. She hasn’t played a single live show via Instagram or any other socials and, until beginning to master and mix the EP, hadn’t revisited the tracks. When she did, she found there’s little difference between then and present day: “That means I’m on the right path,” she says. “I can look back and say, holy shit, absolutely I feel the same.”

She continues to evolve, though: The events of this year, including supporting BLM protests in New York City, embracing the proposal to defund the police, and committing to distributing her wealth (whether that means $5 or $100 a month, depending on her situation) as ways of doing her part for progress have certainly added new layers to her understanding of the world. As anyone should–it’s a lifelong obligation–Lola will continue to learn more and more about how she can best make change.

Still, these songs represent who she is right now: “It’s uncomplicated and it’s real and it’s raw,” she says.

Lola is finally considering the possibility of a virtual live show, even. Maybe she’ll play some songs from Lizard, or maybe they’ll be brand-new songs; she’s working on a Spanish-language LP currently.

But considering how much she misses “jumping off stuff” during live shows, if she can configure her virtual stage to allow for it, Lizard provides more than enough guitar riffage and emotionally-charged screams to soundtrack exactly that. Even if Lola doesn’t end up going live though, plenty of people will be jumping or stomping or other means of rage-releasing as they listen to the EP’s many reminders of what’s wrong with letting the Lizard Man lead. And then, we hope, they’ll join Lola in destroying him and all his friends.