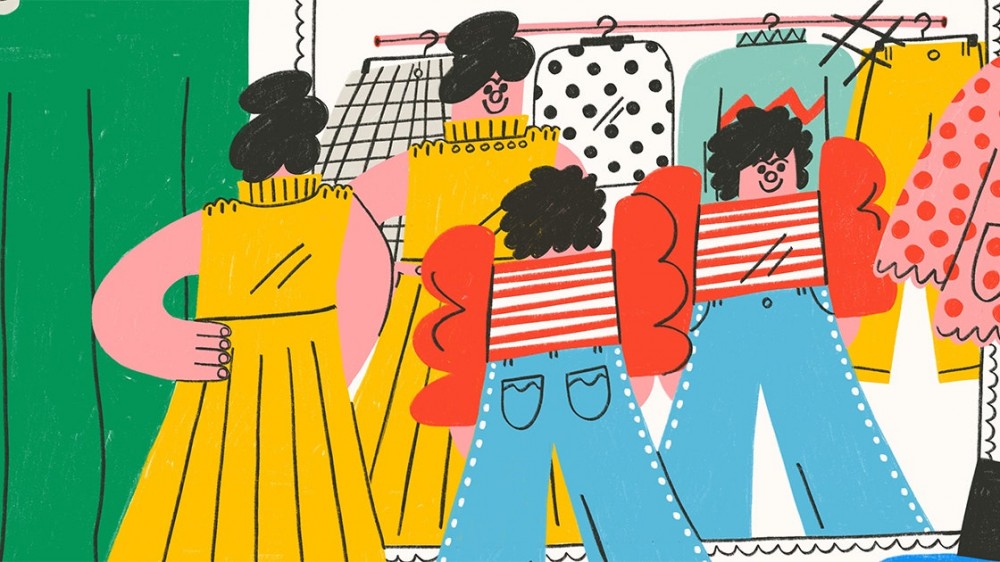 Like so many things “from” Florida—oranges, coconut palms, Rainbow flip flops—I was imported. When I was five, my mother left a failed marriage and a foreclosed ranch house in suburban Connecticut in search of a fresh start; I was too young to realize we had become a cliché.

My mother liked Florida immediately. She met a number of single moms with familiar storylines, and she could tan—her olive skin took on a bronzed patina in the sun—which seemed like a kind of superpower to me. I was born with whipping-cream white skin that burned, peeled, then freckled. My hair, too, rebelled. As a toddler, I had Shirley Temple ringlets, but in Florida, my hair wasn’t so much curly as it was big. The humidity acted like a fireplace bellow, giving it tremendous mass and a halo of frizz.

In middle school, all my knobby-kneed classmates with straight hair had a kind of cool-girl ritual: five minutes before the bell rang, they would remove miniature brushes from their backpacks and methodically comb their hair until class was dismissed. It’s a haunting image—20 girls brushing away in unison. Still, I joined in, separating my barrow curls, teasing them into one large tumbleweed. “Your hair looks like a rat’s nest,” whispered one girl with a lisp.

At the time, my mother worked as a traveling salesperson for a jeans brand that was popular among the sexually advanced girls in my class. The designs were garish in that very specific early aughts way: denim studded with rhinestones, inseams sutured with bright-pink laces, low-rise waists that barely cleared the hips, bell bottoms that tripped strangers. I wore a new pair every day—I was rich in bad denim—but I was no closer to fitting in.

In South Florida, if you weren’t on the beach, you were at the mall. We liked the fancy ones best—palatial, bright-white meccas with valet parking and piano players in suits. My mother and I were devoted shoppers, though we rarely bought anything; purchasing clothing was never as much fun as trying things on. Whenever my mother really liked something, her voice lowered to a whisper. “I luuuuuuuhhhhhve it!” she’d say, her words drawn out like the hiss of a helium tank.

The more the garment cost, the bigger the thrill. And because we never intended to buy the piece, just asking to try it on felt like a transgression. The salespeople didn’t seem to mind, and my mom played the “just looking” part well—besides, we thought, who’s to say we weren’t in the market for a silk georgette cocktail dress or a mink stole?

My mother and I always asked for the largest fitting room available. I had a running list of the nicest ones, tallying up all the little luxuries: an oversized chandelier, a tufted settee, a pair of satin pumps in the corner. In these rooms, I came to see that with the right outfit, you could be anyone. I watched my mother become a business executive in a navy wool suit; a diplomat's wife in a high-necked gown. Following her lead, I always gravitated toward grown-up clothing, but when I tried a piece on, my reflection—round in all the wrong places—never matched what I had in mind. My mother told me to be patient: “One day, you’re just going to shoot up,” she’d say.

The summer before high school was spent plotting. After three humiliating years dressing like my peers (I hit rock bottom in a tee that spelled out “PRINCESS” in rhinestones), I decided I needed a new look. Something more sophisticated. And for a teenager in Palm Beach County in 2002, sophistication meant only one thing: the WASP-y pink and green paradise of Lilly Pulitzer.

It was an empire built on sameness: The same boxy shape (perfect for flattening curves), the same tropical palette (mint, fuchsia, and lime). There was a kind of two-dimensional appeal to the shifts that could make anyone look cute and perfectly happy, like a cut-out paper doll come to life. It was elegant camouflage, I thought; the perfect way in.

I spent months searching for a Lilly Pulitzer of my own, but the right one—the magic one that would turn my hair pin straight and my skin golden brown—always eluded me. Dressing like a WASP only seemed to magnify my otherness; I wanted Kennedys-at-play, but ended up looking more like a couch cushion at a Palm Beach retirement home. It was an unsolvable problem: What was right for Florida was all wrong for me.

Halfway through my freshman year—a regrettable montage of Banana Republic basics set to John Mayer’s Room for Squares—I gave up on the dream of blending in. I could have rebelled, I suppose; a number of kids I knew who were “not the Florida type” protested the place by dressing in angry, all-black outfits, but I didn’t want to double down on being different. I wanted to opt out on my own terms.

I spent the remainder of high school hiding in bootcut jeans and muted sweatshirts, and started dreaming of the person I’d become after I made my escape out of state. My mood board was drawn from the movies—Ali MacGraw in Love Story, Diane Keaton in anything—a collection of oversized knitwear and heavy wool coats, a hat for every kind of weather.

When you grow up out of place, nothing is more powerful than the possibility of transformation. My days playing dress-up seem to me now like research for a future life. I never did fit in Florida, but in my adult years, I came to think of my story differently. I saw myself take shape in the contradiction of my circumstances—of being very pale in a very sunny place, of choosing an eye roll over a toothy smile, a bookstore over the beach. Eventually, I would find the clothes to match.