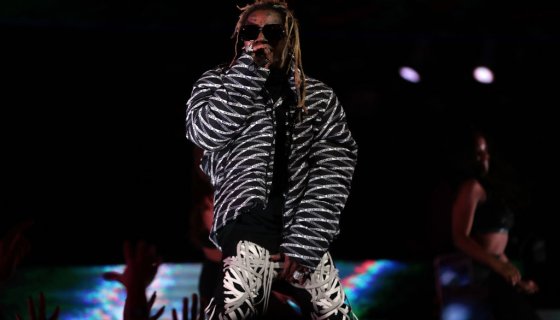 has decided to share his thoughts on the horrific murder of by Minneapolis officer, Derek Chauvin, but his stance on the issue has left some fans angry.

On Thursday (May 28), during an interview with on Instagram Live, shared his opinion on the and called out protestors for not being “specific” with their calls against police brutality.

“I think when we see these situations, I think we also have to understand that we have to get very specific,” Lil Wayne said. “And what I mean by that is we have to stop viewing it with such a broad view, meaning we have to stop placing the blame on the whole force and the whole everybody or a certain race or everybody with a badge. We have to actually get into who that person is. And if we want to place the blame on anybody, it should be ourselves for not doing more than what we think we’re doing.”

The “Funeral” rapper also added that sharing statuses and wearing t-shirts as a form of silent protest is not enough, before asking activists “what’s next”?

When asked by Fat Joe what he would suggest activists do instead, Weezy doubled down stating that he is just now “learning” about activism.

“It’s actually learning about it. What we need to do is we need to learn about it more. If we wanna scream about something, know what we’re screaming about. If we wanna protest about something, know what we’re protesting about. Because if we wanna get into it, there’s a bunch of facts that we think we know that we don’t know . . . We scream about things that, sometimes, they really ain’t true.”

This isn’t the first time that Lil Wayne has made . In 2016, he distanced himself from the movement claiming that the outcry for equality and justice has “nothing to do with me.”

“I don’t feel connected to a damn thing that ain’t got nothin’ to do with me. If you do, you crazy as sh*t.”

After receiving an onslaught of backlash Lil Wayne ultimately ended up apologizing.

Watch the full interview and see what Black Twitter had to say below.

Taylor Swift with the hammer for white supremacists while Kanye West rocks his MAGA hat and Lil Wayne points the finger at us. The epitome of skinfolk ain't always your kinfolk.

This has to be what Lil Wayne see when he look in the mirror pic.twitter.com/pIFq8Ep8XM

Some celebrities are dumb as fuck. Y’all are just stupid as shit. Really. From lil Wayne to Shameik etc. Waste of neurons. So instead of opening up your mouth, open your fucking purse & shut the fuck up. We don’t need y’all to say shit, the real thinkers will sort it out.

And What the Fuck do Lil Wayne be on ?

Is it Cuz folks looks like Tarantula and we cant relate ??

Stop asking that man what he thinks.

Lil Wayne literally thought "Wheezy outta here" producer tag was about him, I'm not gonna stress myself out about what he has to say.

Lil Wayne is 100% correct and people want to act like he's not because they'd rather be emotional than logically. https://t.co/Vh6i6pu5Gu

Lil Wayne Said “We Should Blame Ourselves” For Whats Happening Today……….

Disappointing Is An Understatement. pic.twitter.com/1087TLgLVw

Lil Wayne said “beat the pussy up like Emmet Till.”

And people are still shocked every time he says stupid shit.

Good morning yall. Fat Joe interviewing Lil Wayne about whats going on shows me that these entertainers are the biggest suckas on earth. Not one gotdamn bone in their body to start having real conversations cause their scared of their record label puppeteers