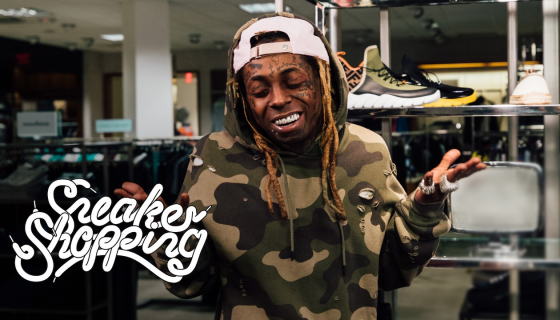 has been in the game for years, and if you’ve been paying attention, he’s a respectable enough sneakerhead, which he doesn’t claim (“I’m not a sneakerhead, but I’m fresh,” he says). The New Orleans rapper is the guest on the latest episode of and offered plenty of insight into his relationship with kicks.

While at a Neiman Marcus in Miami, Tunechi spoke candidly with Joe La Puma about the game including his past relationship with Supra, his skateboarding and how his trusty stylist (Marisa Flores) has allowed him not to shop in a mall for over a decade.

“That whole deal right there got messed up because they didn’t want to do what I wanted to do,” Tunechi of his time endorsing skateboard brand Supra. “They started the uprising of Yeezy shoes at that timed so when they came at me at the time and said this is the shoe we want to put out, I said, ‘That looks just like Kanye’s shoe.’”

So yeah, Weezy wasn’t with following a wave.

Besides speaking on his love for Nike SB’s, he also rocks plenty of J’s, and gets love from Drake. “Drizzy always got the exclusive Js, you know he got the collabs, I don’t know how. I’m not prestige enough, they never gave me a collab with Jordan,” said Tunechie with a laugh. “I’m a skater, I’m not tripping. If I’m going to rock some Js they’re going to be from Drizzy, something that Marisa [Flores] says those aren’t out, I can’t get those.”

As for the shopping, Wayne knew Flores would feel a ways since he went ahead and copped a number of couture kicks from the likes of Balenciaga (a bunch of the Speed Trainers), Dolce & Gabbana and Dior, In total, he dropped a cool $7,773.55, in cash.

Watch the full episode below.