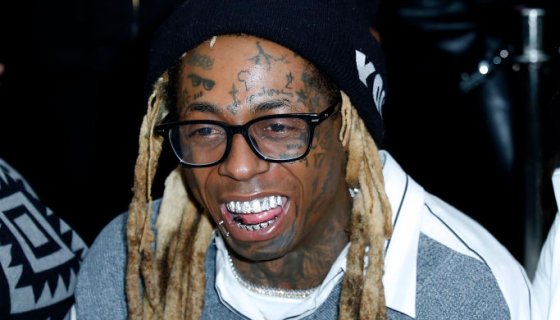 is rock star, but for his debut on Fox’s hit show The Masked Singer, he chose to perform the hit song of an even bigger one.

On Sunday (Feb. 2), the fourth season of The Masked Singer kicked off and while many were trying to figure out who some of the contestants are under those costumes, it was one that stood out immediately and that was the robot—who happened to be .

“I did it for my kids,” Wayne said in his first Masked Singer interview sans mask. “Unexpected joy.”

Singing ’s 1993 hit “Are You Gonna Go My Way”, fans knew instantly that the robot character was none other than Mr. Carter’s but the judges seemed to be completely in the dark. From Shaun White, Johnny Knoxville and Steve-O to Flavor Flav, or Floyd Mayweather; the judges, which included Lil’ Wayne collaborator , were seemingly lost on who was behind the mask.

Ultimately, Lil Wayne was the first to be voted off but his appearance definitely helped kick off the show’s new season. During his post interview Weezy revealed that although he had fun, the show was nothing like what he’s ever experienced before as a performer.

“I always hear everybody that does the show always talk about being how it is being behind the mask and all that,” Wayne said. “And how they feel by not being seen and having to go throughout a few days or whatever being, you know, all that stuff. I didn’t get that feeling. Only thing I felt under the mask was, like, it was heavy. It was all good but I still didn’t understand being behind the mask and feeling something different. I didn’t get that feeling.”

Wayne added that doing the show was “unlike any experience I’ve ever had musically,” noting that he’s “never done choreography” in his life.

Check out Weezy’s masked performance and post interview below.