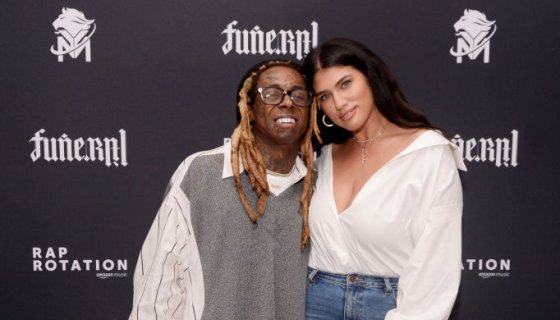 and are engaged, but the two lovebirds decided to utilize a more permanent way to solidify their love.

After the , Weezy and Thomas appeared on social media with matching TNT tattoos. While Wayne opted for the TNT detonator to be inked on his cheek, the Australian model decided to get a stick of dynamite tattooed on her right ring finger.

Lil Wayne’s fiance La’Tecia Thomas has got a stick of dynamite tattooed on her finger while he has the TNT tatted on his face (she is also wearing a ‘Carter’ necklace)! . “I got a plus sized model, but she my lil’ mama; I make her bust it open for me like a piñata; And as the world turned, she was my spin doctor” . “You know wifey from Australia, she said: ‘cheers mate’; Then we toast and see how you niggas tears taste” . #lilwayne #lateciathomas #model #fiancee #dynamite #tnt #tattoo #ink #tatt #australia #rap #hiphop #music #bestrappers #tunechi #weezy #tune #bestrapper #goat #bestrapperalive #lilwaynehq

, the couple made their public debut at Wayne’s album release party in Miami on Saturday, posing for pictures and walking arm in arm. also opened up about Thomas on his album, with tracks “Stop Playing with Me” and “Not Me”, rapping, “You know wifey from Australia / She said ‘Cheers mate’ / Then we toast and see how you ni**as tears taste.”

Although their official wedding date has yet to be disclosed, Weezy and Thomas were engaged last year after Lil Wayne proposed with a massive ring. When asked how the two met, Wayne revealed he slid into her DMs after seeing her on tv.

“I saw someone on TV and I was like, ‘I don’t know how to get in touch with this person,’” Wayne said in a recent interview. “I met a very, very special person.”

Check out the video recap of Weezy’s album release party for Funeral below.

Rekap of my dope ass rekord release party this past weekend! Shoutout @republicrecords @amazon @lyft @rotation @originalbumbu and any and everyone who attended! Stream Funeral NOW!!! 🥀