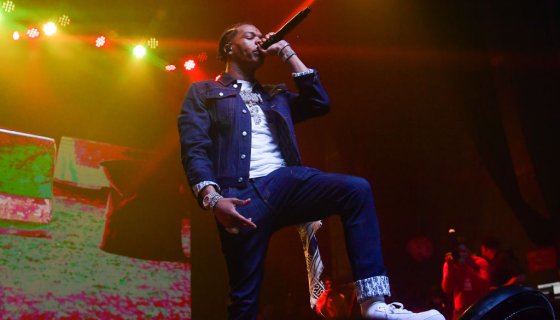 The current civil unrest sweeping across the nation following the deaths of , and Breonna Taylor at the hands of police plus the of Ahmaud Arbery helped inspired Lil Baby’s new track. The Atlanta rapper’s latest track starts with soundbites of news clips reporting on the recent tragic events and protests across the nation and world that subsequently followed. Each clip highlights one commonality, they point out that people are in the streets calling for the arrests of the police officers involved before chants of I can’t breathe” come in.

On the song produced by Section 8 and NOAH, Lil Baby discusses what is going on in the world right now while calling out systemic racism and the police brutality Blacks are enduring from the police. On the track, he raps:

“I find it crazy the police’ll shoot you and know that you dead, but still tell you to freeze. Fucked up, I seen what I seen.
I guess that mean hold him down if he say he can’t breathe. It’s too many mothers that’s grieving. They killing us for no reason.
Been going on for too long to get even Throw us in cages like dogs and hyenas.”

Following the song’s release, Twitter immediately showered it with praise, with users calling him the goat.

Lil baby said it “it’s bigger than just black and white it’s a problem with the whole way of life” 🐐 pic.twitter.com/m2WRLOYHVZ

The song is powerful and is definitely can serve as the soundtrack for the protestors in the streets right now demanding justice and calling for an end to police brutality. All proceeds from the record will support the push against racial inequality. You can listen to “The Bigger Picture” and peep the reactions to the song in the gallery below.

"i find it crazy the police'll shoot you and know that you dead, but still tell you to freeze" Lil Baby pic.twitter.com/r8WNImBPn8

Lil baby is officially goat status in my book pic.twitter.com/5kH8n9MYHS

Me, after listening to Lil Baby’s song 5 times in a row!! pic.twitter.com/tIIuqlORb0

“ Every colored person ain't dumb and all whites not racist
I be judging by the mind and heart, I ain't really into faces ” Lil Baby 🐐 pic.twitter.com/0oKQJHCJ7o

I Literally Was Just Telling My Friend We Need Niggas Like Lil Baby, Durk, Herbo & Polo G To Talk To These Young Men About The Current Issues. Cause Thats Who They Listen To & Fuck W. ! I Love Lil Baby For Speakin Up. This What We Needed. Lil Baby Don’t Miss. 💯 pic.twitter.com/KHMBdStGeh

Lil baby is not to be played with, give him a goddamn Grammy already 😤 pic.twitter.com/HUASF7V4PO

It’s bigger than black and white, it’s a problem with the whole way of life, can’t change over night, but we gotta start somewhere…- Lil baby

"Imma make it count while I'm here…..God is the only man I fear…"

“The Bigger Picture” is the new national anthem. @lilbaby4PF pic.twitter.com/DRsaE7ehmf

“This bullshit is all that we know, but it's time for a change

Got time to be serious, no time for no games

We ain't takin' no more, let us go from them chains

God bless they souls, every one of them names”- Lil Baby, “The Bigger Picture “
–
2020 delivering great protest music pic.twitter.com/Mmr6CdHZfQ

Did not expect mild-mannered, considerate political analysis from Lil Baby this evening.

😳😱Lil Baby conscious vibes!??? He took off on “The Bigger Picture” 🚀🚀🚀 I wasn’t expecting bro to be speaking on Police Brutality, systematic racism and inequality. I’m here for it. Won’t say no names but now not the time to be dropping substanceless music. ✊🏾✊🏽✊🏽✊🏻✊🏿

Love that ⁦@lilbaby4PF⁩ has been stepping up as a voice for this new generation of rappers.

His actions during the protest in Atlanta last week and now putting his words on a record like this. Powerful. Salute, Lil Baby. 🙌🏽🙏🏽 #blm https://t.co/voNn6AuGWV

Lil Baby going legend right in front of our eyes!

Just give lil baby a Grammy this year already 🔥😤