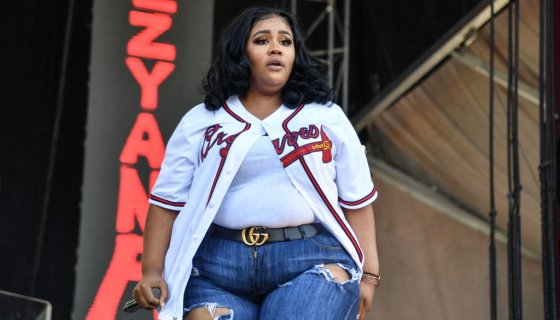 The season finale for Love & Hip Hop: Atlanta has arrived, and the cast and crew had their hands full with the self-proclaimed “Queen of Atlanta” Akbar V and the arrival of the coronavirus:

The episode opens up with Akbar stopping by Sierra’s shop for some girl talk with her friend. Before they get into the mess, they have a brief conversation about the looming coronavirus epidemic on its way.

Anyway, Akbar asks Sierra about the situation going on with her daughter Paris. Sierra reveals that she put her daughter in a private school, and she likes it a lot. Sierra switches the topic to BK, detailing how furious her ex-boyfriend has made her. She is so mad in fact that she claims she misses Shooter and has considered getting back with him *rolls eyes.*

Is Sierra better off with Shooter or BK? #LHHATL pic.twitter.com/2MJJDNjKZu

Akbar then breaks down that she is frustrated trying to secure a record deal and how the “label” is stalling the process. Akbar is also upset with people clowning her because all of her damn kids don’t live with her despite the fact she has custody of them.

Akbar’s temper flares when Sierra says she likes both Akbar and LightSkinKeisha.  Akbar claims this proves Sierra isn’t loyal and insists she chooses a side in the battle. She also claims that Keisha has been sending her nasty DMs about herself to fans.

Sierra brings up the fact that Spice is having an event, and she urges Akbar to be on her best behavior and not start any trouble while there.

Speaking of LightSkinKeisha, we catch up with her and Coca Vango.

I need Light Skin Keisha to come to my house and shame me from eating junk all the time! 😂😂😂#LHHATL pic.twitter.com/cVFX2oRC8x

We honestly forgot they were even on the show. Keisha is stressing because she knows Akbar is going to be at Spice’s event, and she is still not over Akbar verbally bothering her during her interview with Joc at the radio station. Keisha claims that Akbar just likes to feud with other female rappers and that she needs therapy.

We immediately head to Spice’s event, where a majority of the episode takes place. Things get spicy quickly when Kyomi mentions to Alexis that she used to talk to Fetty Wap. Alexis doesn’t let this bother her, even explaining that she is in a better place with Karlie.

Now… why would Kiyomi bring up Alexis's baby daddy RIGHT upon meeting her??? 🤦‍♀️🤦‍♀️🤦‍♀️ #LHHATL pic.twitter.com/jQTg4irBK7

BUT, of course, Karlie isn’t here for Alexis even accusing her of lying about the ring that Mo picked out for her.

Karlie takes her trolling a step forward and begins to question Alexis’ trafficking story claiming her now ex-husband Mo told her Alexis was out living wild when she was 16 by choice. Alexis runs outside and breaks down in tears following Karlie’s questioning of her accounts.

Seems like Karlie isn't buying Alexis's story… was she wrong for trying to question her in front of EVERYONE? #LHHATL pic.twitter.com/n4FD2nW4yn

While Alexis is outside shedding tears, Karlie starts more trouble when she introduces Shekinah to Akbar. Karlie has no idea the two don’t like each other, and it immediately shows.

"Nobody knows what I went through!" 💔

Alexis is UPSET after Karlie casts suspicion on her story. #LHHATL pic.twitter.com/kMoyJZF0Ri

Akbar being petty, decides to throw her drink on Shekinah, and the two almost come to blows, but security was on hand to make sure that didn’t happen. Shekinah winds up being escorted outside even though she was the victim and rages in front of the spot.

Shekinah gets a drink to the face from Akbar, but WHO startes this tit-for-tat? #LHHATL pic.twitter.com/rJf4UoOXxh

Did Shekinah deserve to be put out if it was Akbar who threw the drink? 🍹#LHHATL pic.twitter.com/dbNDF8IWPt

Tokyo and Keisha show up and are greeted by a screaming Shekinah, but they have no clue as to what is going on. Back inside, Spice confronts Akbar and points out that she didn’t keep her promise about not fighting in the club. Akbar promises to exhibit some sort of chill while at the event.

Things do calm down a bit, allowing Spice to perform her new single, and everyone at the event starts dancing. After her “performance,” Spice has a conversation with Tokyo and Keisha breaking down what happened with Akbar and Shekinah. Keisha then decides to ask Akbar what exactly is the problem between both of them, and Akbar starts fighting again. Tokyo jumps in to protect her friend, and security once again has to break up the situation and takes Tokyo and Keisha outside.

Why did Akbar just attack Light Skin Keisha unprovoked like that? #LHHATL pic.twitter.com/6GyGP1D2oM

After that situation calms down, Akabar walks up to Spice and Karlie and Spice, who, at this point, is fed up with Akbar for ruining her event swings on her. Spice kicks Akbar out of her event and tells the “Queen of Atlanta” that she is done with her.

Meanwhile, outside, Shekinah, LightSkinKeisha, and Tokyo are waiting to put hands and feet on Akbar. They sneak Akbar out the back in hopes of avoiding another confrontation, but somehow, someway Keisha manages to catch up with Akbar’s vehicle, and another fight ensues.

Akbar and Light Skin Keisha cause bumper to bumper traffic when they bump fists! 🚦😨#LHHATL pic.twitter.com/aQBSYyWzm8

Nothing really happens, but seriously they are doing all of this while the coronavirus is beginning to spread in Atlanta.

Moving on, we catch up with Kirk, Shooter, and Scrappy, who is strangely touching his son with the dirty gloves he has on. Talk about dumb. Kirk and Shooter are scrubbing down Kirk’s restaurant due to COVID-19.

Somebody get Bambi back to her baby! 😂#LHHATL pic.twitter.com/OIEbtQXTO5

They have a brief conversation about Shooter’s “love triangle” with Kyomi and Cheyenne and Shooter confirms he is done with both of them. The conversation is interrupted when the #LHHATL production crew walks in and tells them they have to shut down due to the coronavirus.

Kirk hilariously asks, “how we gonna live?” The producer’s face pretty much says it all.

Anyway, a montage showing the cast and how they are dealing with the outbreak plays and the season ends.

You can peep all of the reactions to Akbar, losing her damn mind the entire episode in the gallery below.

@LightSkinKeisha is me when they open the clubs back up. #LHHATL pic.twitter.com/c3zHDW6VSO

Tokyo describing to her friends what she did to Akbar #LHHATL pic.twitter.com/W3ht92elrh

Karlie annoys me, she don't get her head beat in enough. #LHHATL pic.twitter.com/KbQVEYGmAo

Ak no bars…oh sorry I meant Akbar said SPICE is a struggling artist? Bitch where? LETS SEE YOU COME UP WITH SOMETHING THIS GOOD #LHHATL pic.twitter.com/tx45Xd7wB6

Kiyomi: I use to talk to Fetty. Me: #LHHATL pic.twitter.com/3mpgKNCrlB

Akbar : Mimi, we need you to chime in.

Kendra: " what is that gonna do for the wedding babe?!"

Akbar I thought 💭 you was bout that life sis, what happened #LHHATL pic.twitter.com/OsNw4046s6

This is the one season where an in-person reunion is necessary and we won’t even be getting one 😭 #LHHATL pic.twitter.com/sPKhM6iRx9

All in Favor of Akbar not returning next season raise your hand #LHHATL pic.twitter.com/RErhtO4DOW

Rt if Tokyo that friend you need in yo life #LHHATL pic.twitter.com/RXk0TpyrBx

And on that day Akbar realize she wasn’t running shit in Atlanta #LHHATL pic.twitter.com/GvXE92unJX

What Kurt talkin bout how they gonna live? The same way everybody else is livin #LHHATL pic.twitter.com/VR9b7oYjbG

SPICE HAD ALRITE TO BE PISSED 😡 TF OFF #LHHATL pic.twitter.com/A7SSdHQN4j