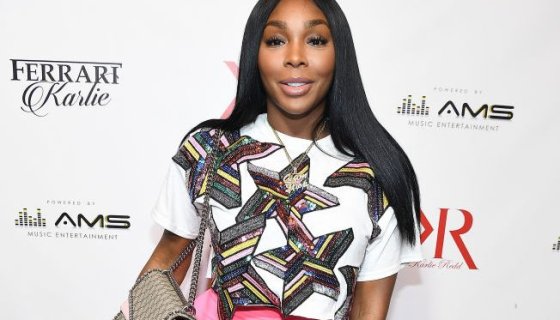 We left the cold streets of and are back in the ATL, its time for a new season of Love & Hip Hop Atlanta and the first episode didn’t disappoint.

The episode opens up at Stevie J and Mimi’s daughter, Eva’s 10th birthday party. Everyone seems to be happy and in a good space in their lives, especially Stevie. The “good guy” is getting along with Joseline and has , Bonnie Bella, and is even cordial with Mimi again. Mimi believes it has a lot to do with his .

From dysfunction to… DRAMA FREE! We NEVER thought we’d see these two getting along like THIS!

Joc and his fiancée Kendra show up, and they are still going strong as well. Kirk, Rasheeda, and Carter are also in the building to celebrate the occasion. Rasheeda is happy to see Stevie and Mimi both co-parenting and asks Mimi how is her relationship with Joseline. She reveals that Stevie gave Joseline her number, and the once bitter enemies are now getting along with each other and exchanging texts.

Even Mimi’s relationship with Joseline has experienced major *GROWTH* chile!

Rasheeda then chops it up with Kendra and asks her if she caught baby fever being among all the kids at the party, and Kendra shuts that down immediately. Regardless, Rasheeda believes that Kendra is a good woman for Joc and invites them to her and Kirk’s 20th-anniversary party.

We head over to Scrappy and Bambi’s house, and their young son, Breland, is now 18 months. They get a visit from Momma Dee, and she is not in good shape. Due to her drinking problem, she developed a kidney stone that ruptured her bladder resulting in her having to three surgeries to correct the issue. Momma Dee has a fourth surgery coming up, and she wants Scrappy and Bambi to be there.

Praying that she gets back on track! 🙏🏽#LHHATL pic.twitter.com/wRw1sgSGLW

While talking about her current health situation, Momma Dere breaks down in tears. Scrappy tells his mom that she needs to put down the bottle because she could lose her life.

We catch up with Sierra, and she is also going through a serious legal situation that could land her behind bars for 12-months. Allegedly Sierra got into a fight with Shooter’s baby momma while she was pregnant, so if she is found guilty, Sierra is looking at some serious jail time.

Sierra is facing a SERIOUS legal battle that might set back ALL the progress she’s made since being homeless and a teen mother…#LHHATL pic.twitter.com/SspwNM6pEk

Sierra takes her two kids to the bowling alley where Shooter is celebrating his late son, Rod Jr.’s, birthday. While the kids are away, Sierra and Shooter have a conversation. She asks him to come to court and testify on her behalf to help clear her name, and Shooter was like… NAH. His excuse was that he doesn’t want to step foot in a courtroom again. He also brings up the fact that Sierra wasn’t there for him while he was in court for his son’s trial.

Shooter is REFUSING to go to court to testify on behalf of Sierra. Is she asking for TOO MUCH or should she be able to rely on him for something THIS SERIOUS when they have kids together?#LHHATL pic.twitter.com/O0PWmbTiRD

Sierra tries to clear her mind by going on an ice skating double date with her boo, BK, Scrappy, and Bambi. Of course, not much skating goes on. While the men step away, Bambi and Sierra talk about the situation and Sierra starts crying at the mere thought of possibly going to jail, Bambi does her best to console her.

The prospect of potentially going to jail is TEARING Sierra up—not just for herself but for her children!

Praying for this family! 🙏🏽 #LHHATL pic.twitter.com/M5iPzkMUhy

We link up with Joc and Kendra, and they are currently dog shopping. The conversation quickly goes left when she suggests Joc should get a vasectomy. Of course, Joc doesn’t want to do that, and he also feels his future wife has changed since he asked for her hand in marriage.

Kendra is ready to get DOWN TO BUSINESS when it comes to marrying Joc, but he doesn’t seem to be with all the SERIOUS talk.

Is he READY to be a HUSBAND? 💒 #LHHATL pic.twitter.com/dbsX8koS0q

Even though he objected, somehow, Kendra got Joc in the doctor’s office to talk about the procedure. Joc is still not sure he wants to go through with it and finally decides not to do it. Kendra tells Joc he is selfish; he retorts by suggesting that she should get her tubes tied. That leads to an argument between the couple.

It takes TWO to tango, so who should be the one to be CUT!? #LHHATL pic.twitter.com/q3lNHGwm86

Finally, its time for Kirk and Rasheeda’s 20th-anniversary party. Can we add how annoying these two are but more blessings to them. Sierra has a conversation with Karlie and asks her to come to court and speak on her behalf because she was at the funeral and saw the whole incident and can vouch for her. Karlie agrees, but during her confessional points out that Sierra wasn’t there for her when she needed her.

“I just wish that the support went BOTH WAYS”

Karlie and Sierra seem to be going through a rough patch in their friendship…It would be a shame if it… ESCALATED…#LHHATL pic.twitter.com/vS3b8pCNK4

Well, anyway, an event that was meant to celebrate Kirk and Rasheeda goes completely left when Alexis Sky (why is she still on these shows?) and Akbar V show up… uninvited. Apparently, Alexis and Karlie Redd’s husband, Arkansas Mo (these names are trash) used to date.

Alexis spots Karlie and things get heated immediately, and security quickly steps in to separate the two women. So it was just drink throwing and body parts flailing in the air before Alexis was removed from the venue.

Alexis Skyy came to ATL on a MISSION!!! And it’s to get her hands on Karlie Redd 😬😬😬

All this over Arkansas Moe? #LHHATL pic.twitter.com/EVgXMccxXR

The episode ends on a cliffhanger with Karlie in a funeral home standing in front of a casket. We have no idea who’s in it, but someone has died, and all the girls are showing up to meet Karlie. We guess we have to wait till next week to find out who passed away.

Of course, there were plenty of reactions to the Love & Hip Hop: Atlanta premiere, you can peep them all below.

So…Alexis Sky went to a party she was not invited to to fight with someone who didn’t care? On national TV? Couldn’t be me… #LHHATL pic.twitter.com/izI9sC3xgW

Joc’s girl is bugging tf out.

She’s the one that doesn’t want kids but is almost forcing him to get a vasectomy???

If you don’t want kids you tie your tubes sis tf..#LHHATL

Damn shooter you did Sierra dirty and was the reason for y’all divorce. The least you could do is support the mother of your kids in court. what’s wrong with these niggas #LHHATL pic.twitter.com/Nph0xQvPBg

Rasheed is hype about being married 20 years to low down dirty Kirk. #LHHATL pic.twitter.com/ygvEGSTY1S

WHY did Karlie mess with her lips, dear God? WHY?! #LHHATL pic.twitter.com/ow8BxaYcLb

Oh Shooter u whole petty mf in dez streets. So 2 yrs later bc Sierra didnt ''support u'' like u wanted her to, u rather her go to jail & LEAVE HER KIDS ……. u just butt hurt can she dont want you no more. Im sure thats what it is.. aint got nothing to do with yo son. #LHHATL pic.twitter.com/RAF2Mys93W

Why is Rasheeda happy about 20 years of marriage when Kurt has cheated about 15 of them years #LHHATL pic.twitter.com/ptgxwTSwsR

Sierra still holding onto BK after he disrespected you on national tv. Called you out your name and shit 🙄. #LHHATL pic.twitter.com/59M11FmN2f

Finally watching #LHHATL and flabbergasted that shooter is really not gonna testify over some simple minded shit…who would let their child's mother possibly face jail time over some pretty BS? pic.twitter.com/shJ8pSFlw5

They love to show these sweet scenes of Scrappy, but every time I see him all I can think of is how disrespectful he is towards Erica Dixon…. #LHHATL pic.twitter.com/9dlqLga09i

Every time I see Bambi I just think about her on that bicycle. Every time she talk shit I just be like you really road a bike to this nigga house. #LHHATL pic.twitter.com/twsS8iKgUv

Alexis been to 3 different cities fighting over a man!! #LHHATL pic.twitter.com/Gdz8W3S7bc

You’re only concern is your daughter, but you at other people’s events fighting instead of being home with your daughter! #LHHATL pic.twitter.com/b1aZmXKZIX

Alexis hunny why are your storylines always sleeping with “someone’s”man, then wanting to fight the girl#LHHATL pic.twitter.com/739dT7MK6D

Karlie, don’t EVER go back that lip doctor. #LHHATL pic.twitter.com/iFIisHF8DR