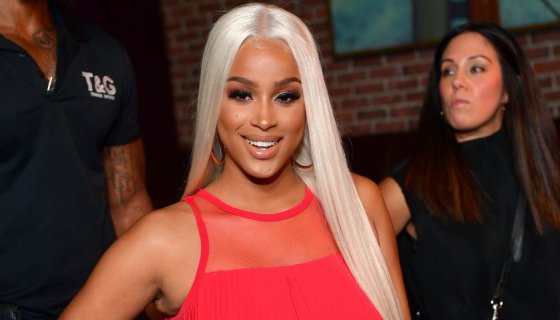 Last week Love & Hip Hop: Atlanta ended with fighting over Sierra’s leftovers, aka Shooter. We pick right back up with that messy situation.

The episode immediately brings us back to Joc’s restaurant, where all the drama is going down. Cheyenne was taken by surprise when Shooter and Kyomi walked in the joint in matching outfits, making her look stupid. Cheyenne immediately wanted all the smoke exchanging words with “elevator girl” before she launches her shoe at her.

Security gets in between the two women, and Cheyenne accuses Kyomi of sleeping with her brother Scrapp.

'I was JUST at his house last night"…

Cheyenne let's it be known that their relationship isn't as distant as Shooter wants to claim. #LHHATL pic.twitter.com/MAtJTUiO82

When they finally get outside, Kyomi tells Shooter she never slept with Scrapp and that all they did was flirt with each other while he “helped” her with her “music career.” Shooter and Cheyenne agree to move on from the matter.

Now Scrapp is being accused of messing with Kiyomi as well…

Back inside Joc’s restaurant, Cheyenne is not too happy with her brother Scrapp and goes off on him for not telling her about Kyomi. Scrapp tells his sister he didn’t know Shooter was messing around Kyomi. Scrapp also reveals he doesn’t see himself doing business with Shooter anymore. Cheyenne breaks down and sheds tears, and Scrapp consoles her and gets her to hop in her vehicle and leave.

We all been here at least once, poor Cheyenne! 😢💔#LHHATL pic.twitter.com/aVtuQL1OD8

Back in Tennessee, the girl’s trip is still underway. Karlie Redd and Sierra use the moment to have a face-to-face conversation. The former friends admit they miss each other and decide to catch up on what’s going on in each other’s lives.

Sierra finally takes responsibility for not only getting physical with Karlie, but for neglecting the relationship between them. 💔#LHHATL pic.twitter.com/cIq76Umspx

Zapping back to Tennessee, the ladies hopped on their bus so they can go hit the slopes. On the way there, more drama ensues between them when Shekinah asks what went down between Karlie and Sierra, she gets a smart ass reply from Sierra and isn’t feeling it. An argument ensues between Sierra and Shekinah, and Bambi is caught in the middle of it and looks entirely over it.

Are the girls being too sassy with Shekinah? Or was she being a little too sensitive this time? #LHHATL pic.twitter.com/MaUqEWNTtF

Spice eventually gets involved and revisits her problem with Shekinah calling her a flake. A pregnant Bambi is over it and is shedding tears. Ultimately, the bus stops, and Skekinah and Spice step outside, and security has to step in between them. Shekinah didn’t want any of Spice’s smoke and doesn’t want to fight because she way too many surgeries.

Now… was this really THAT serious for Spice to try and FIGHT?#LHHATL pic.twitter.com/Mf2ORnKykU

Bambi has seen enough and tells the ladies she just wants to go home and decides to head back to the rental house. Meanwhile, the ladies finally reach the slopes for their ski lessons and pretty much showed that outside of spreading gossip, they have no idea what they’re doing.

Safe to say these ladies won't be winning any medals… #LHHATL pic.twitter.com/qN1eMZFRCg

Back in Atlanta, Bow Wow’s exes, Kyomi and Erica Mena, link up. Kyomi’s incident with Bow Wow is eventually brought up, and Erica claims she is proud of how Kymoi handled herself. When the conversation shifts to Cheyenne, Kyomi states that Cheyenne isn’t her type because she is basic. Kyomi, who isn’t opposed to bringing someone in the bedroom, reveals that Cheyenne isn’t welcomed in her and Shooter’s bed. Kyomi also claims she is open to having a conversation with Sierra.

Sierra and Kiyomi have NEVER met, but that didn't stop Shooter from having her around the kids…

Was he wrong for that? #LHHATL pic.twitter.com/R7jf46mSD6

After spending some time on the slopes, the ladies head over to the Ferris Wheel. Shekinah and Spice are the first to get on the ride and immediately both kiss and make up. Spice explains to Shekinah that she is only upset because she didn’t show her any houses in Atlanta. Shekinah promises to take Spice house hunting when they get back to Atlanta. The ladies hug it out and are friends once again.

"When are you ready to go look at this house?" 😑

We jet back to Tennessee, and poor Sierra is going through it with her boyfriend BK. While Spice, Mimi, and Karlie are in the pool, Sierra can be heard in the kitchen, giving BK a piece of her mind. Sierra’s friend Tiffany Foxx snitches on BK, telling Sierra that someone was feeling on his beard in the club.

After Sierra's homegirl let's her know that BK is flirting with some women while she's at the ski resort, Sierra let's him HAVE IT!!! 😤😤😤 #LHHATL pic.twitter.com/bvu6HtNSVv

BK initially denies the accusations, and Sierra hangs up the phone on him. When the rest of the ladies arrive in the kitchen, Sierra tells them what happened. She also reveals that she found out that BK has a secret Instagram page where he looked at other women, including both of his exes. This is why she refuses to have children with him, and she announces that she is done with BK.

What do y'all think about Shooter's reasoning for not being real with Cheyenne? #LHHATL pic.twitter.com/iXblZR5rgh

When Cheyenne reveals that she has been around Shooter’s kids, Kyomi gets upset because that means Shooter’s relationship with Cheyenne is more serious than he let on. Cheyenne then goes on to accuse Kyomi of sleeping with Scrapp, and he doesn’t refute his sister’s revelation.

Kiyomi: Scrapp did we f*ck? Yes or no?

Scrapp: *Gives an answer that is neither a 'yes' or a 'no'

Kyomi gets in the car and waits. Before they leave, Shooter tells Cheyenne that Kyomi took her spot. Kyomi gets out of the car the two women almost come to blows again, and the episode ends.

WAIT!!! Why are these ladies fighting one another when this is ALL because Shooter wasn't keeping it 💯???#LHHATL pic.twitter.com/xmDDPx7h2Z

Viewers clowned the hell out of Kyomi and her behavior. You can peep all of the reactions in the gallery below.

Y’all fighting over a nigga who would let his baby mother go to jail! #LHHATL pic.twitter.com/GUM3SjGEFc

Kiyomi, girl being in an open relationship is not a badge of honor Lmfaoo 🥴😂 a man not wanting to commit to ONLY YOU isn’t shit to boast about 😴😂 #LHHATL pic.twitter.com/XsRoNKpGhS

Laaaaawwwwddddd please keep me away from the Shooters and Kirks of the world! #LHHATL pic.twitter.com/G7yWhHSWKi

“I done had too many plastic surgeries to be fighting” #LHHATL pic.twitter.com/Hgu3Y56gYo

You can’t heal by being the HBIC in a OPEN relationship… with Community dick #LHHATL pic.twitter.com/sGSF7W9hbA

#LHHATL If Kiyomi knew about Cheyenne but Cheyenne didn't know about Kiyomi… who's the real side chick? pic.twitter.com/urCt5E5ADj

Scrapp talking bout don’t cry over these niggas, they not worth it… SCRAPPP YOU ONE OF THESE NIGGAS THO!!!!! #LHHATL pic.twitter.com/kTB82ohOXB

Why are Safaree and Erica on here, damn didn’t we just see y’all a month ago #LHHATL pic.twitter.com/lP6tcRZWOH

One thing for certain and two things for sure….Cheyenne is NOT ugly #LHHATL pic.twitter.com/hMBwvtAna6

Y'all don't have to keep reminding us every 5 minutes that the interviews are taped from home. WE GET IT #LHHATL pic.twitter.com/ayw4GBMhms

We all know what "doing music" mean Kiyomi. #LHHATL pic.twitter.com/8h6vF70hIH

And this is why you don't brag on niggas ! Because they 🗣 ALWAYS EMBARRASS YOU! 😂 #LHHATL pic.twitter.com/KFm6ZqStsn

Its soo crazy to me how the Kirk's and Shooter's of the world with 400 kids and 7 baby mamas ALWAYS got chicks willing to fight over them…and I#LHHATL pic.twitter.com/cxIRFi3JA9

Wait, so sis was talking about how Cheyenne is a realtor, but what does elevator girl do? #LHHATL pic.twitter.com/6jWdm9hmqg

Sierra not wanting to be pregnant by BK is the main reason she don't need to be in a relationship with him. Why be someone who you don't even trust? #LHHATL pic.twitter.com/g1klT7yQ8B

The amount of Botox Sierra and Karlie Redd injecting themselves with is just too much #LHHATL pic.twitter.com/JYaIkIdukt

Wait… Cheyenne has a Porsche and a career…. but Kiyomi , the one with no career and in an open relationship, has the nerve to call her basic? This dont even go together. #LHHATL pic.twitter.com/psGQhnJAsF