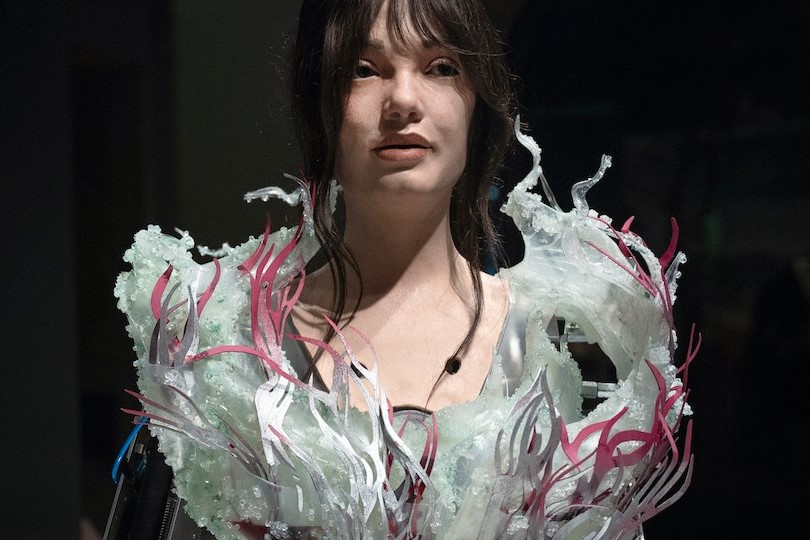 Pioneering digital couture house Auroboros is taking over the V&A with a growing crystal gown, as worn by interactive android Ai-Da

Alexander McQueen and Damien Hirst, Louis Vuitton and Richard Prince, Comme des Garçons and Cindy Sherman. The culture of artist and fashion house collaborations has a rich and complex history that can be traced all the way back to the 1930s and Elsa Schiaparelli’s long-standing partnership with Salvador Dalì.

Some artists like Jean-Michel Basquiat walked in fashion shows, while others created Tumblr-famous installations in the middle of the desert replicating a Prada store. But what about exploring this notion in the contemporary context of virtual design and digital art? The designers behind cyber couture house Auroboros are giving this old trick an update as they work with the first humanoid artist Ai-Da to present their metamorphotic garment in physical form.

Presented as part of the 19th London Design Festival, which is currently happening throughout the British capital until September 26, Auroboros have developed a multi-layered project across both the physical space of the Victoria & Albert museum and the metaverse.

There are several elements to it, so let’s break it down. In her modelling debut, android Ai-Da has taken over a corner of V&A’s fashion gallery, where she is currently dressed in a custom Auroboros gown. The dress itself will be growing in real-time through an oxidation process that hardens a special liquid into sparkling, colourful crystals. And while all this is going on, Ai-Da will be drawing self-portraits, seen through the cameras in her eyes which capture the reflections of the evolving look in an adjacent mirror.

Alongside this performance, those visiting can also interact with the robot – asking her questions, and exploring some of her recent artworks, including glass sculptures and a computer-gaming golden egg. There’s also an Instagram filter that allows you to try the shapeshifting couture on for size, and a digital campaign featuring a virtual version Ai-da in Auroboros’ VR designs.

The undeniable star of the show is the physical garment itself – a sculptural mullet dress made from recycled perspex with crystals, geometric-cut absorbent papers, and embroidered panels. The design follows on from history-making AW21 offering Biomimicry, which became the first VR collection shown on the London Fashion Week schedule.

“Ai-da felt really fitting because she’s both a robot and an artist and this partnership was a great way to encompass what we really stand for – technologies, new possibilities, and exploring what identity is in a digital context. We want to show that the future doesn’t have to be so dark and dystopian – it can be beautiful and it can be fun” – Paula Sello

“It’s like an alien plant growing around Ai-da – opening up, revealing what’s hidden underneath and, of course, what’s to come,” says Paula Sello, who co-founded Auroboros and shares the creative director role with Alissa Aulbekova.

Mimicking a blooming flower, the dress will continue to grow and change across the course of the coming days – the designers themselves will apply coloured liquids to its base materials at regular intervals, but admit they have no idea what its final evolution will look like.

“We were always interested in the idea of what if the clothes could grow,” explains Aulbekova. “This time, we focused on crystallisation because you can really see it happen in a time-span of six to 12 hours, and there’s something so magical and even childish to see that process, which can take thousands of years in nature.”

But how did the idea of Ai-Da modelling the look come about? ‘It’s a match-made in heaven, especially considering the time we’re living in,” adds Sello. “Ai-da felt really fitting because she’s both a robot and an artist and this partnership was a great way to encompass what we really stand for – technologies, new possibilities, and exploring what identity is in a digital context.”

Discussing the post-V&A life of the garment, she teases a virtual future which perfectly reflects the dichotomy of physical craft and digital artistry that lives under one collection. Surrounded by blooming crystals in technicolour, Sello concludes: “We want to show that the future doesn’t have to be so dark and dystopian – it can be beautiful and it can be fun.”

The Auroboros x Ai-Da installation will be on display in the fashion gallery of the V&A until September 26. Head here for more information.