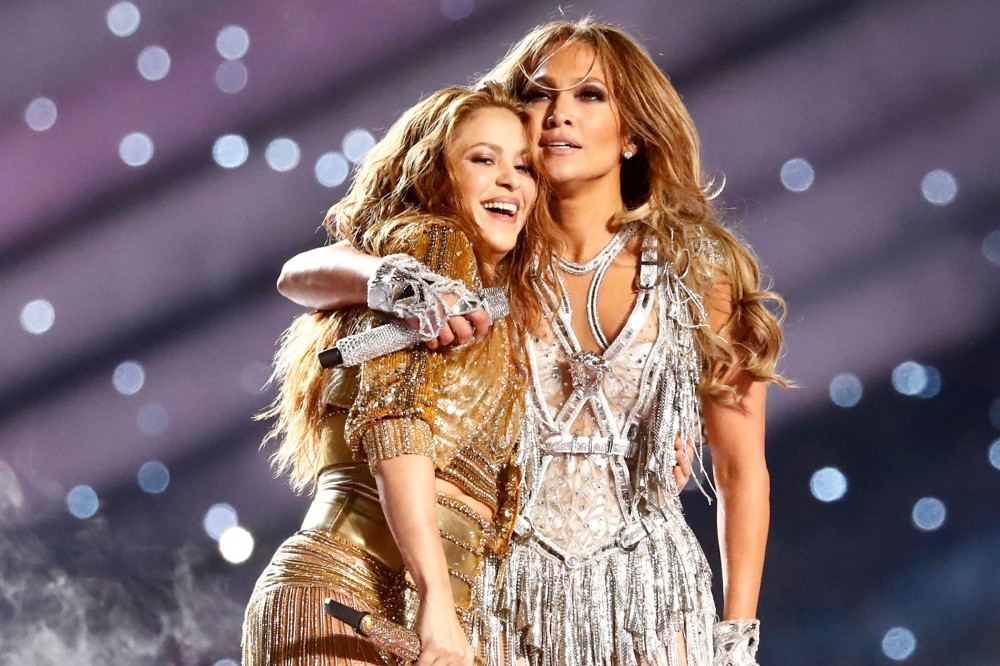 Yet in the months leading up to the show, fans and detractors alike came down on the pop stars for even accepting a gig from the NFL. Citing the coerced resignation of San Francisco 49ers quarterback Colin Kaepernick — best known for kneeling during the national anthem in protest of racial inequality through 2016 — several black performers, including Rihanna to Cardi B, had declined the coveted halftime slot. So long as Kaepernick remained jobless for exercising his right to free speech, according to some critics, performing the halftime show would be tantamount to crossing the picket line.

In solidarity with Kaepernick, the rapper-turned-entertainment mogul Jay-Z had counted himself among those boycotting the NFL. That is until 2019, when the NFL proposed a partnership with his agency, Roc Nation, to help rehab their reputation by curating a diverse lineup of performers for its Miami edition of the Super Bowl. When paired with the Inspire Change initiative — which has proposed $100 million in grants to grassroots social justice groups — Jay-Z argued it was a challenge worth accepting. In honor of Miami’s 70-percent Hispanic population, he promptly recruited the two most famous Latinas he could find to represent: J. Lo and Shakira.

The Great Thanksgiving Game That Wasn't

Online, Latinos and non-Latinos alike spent the days leading up to Super Bowl Sunday mired in intellectual skirmishes. (“It would’ve been a truly powerful moment for the Latinx community if two white-passing Latinas [stood up] and aligned themselves as allies to the Black community and rejected an offer to perform at the Super Bowl,” wrote Melania-Luisa Marte for Remezcla in 2019.) As Kaepernick’s former team faced off against the Kansas City Chiefs in the year’s biggest football game, his absence was felt deeply across the Internet. And for many, enjoying the uptick in Latinx representation felt like a betrayal to black communities — the tension more intensely felt among black Latinos. Was this new, inclusive halftime show a cynical way to silence black activists? Or could it be a viable space for inciting social change in the United States? By the show’s end, it became harder than ever to parse — because the answer is, simply, both.

In the context of American pop culture at large, this year’s halftime show undeniably represents a watershed moment for Latinos in the United States. Now roughly 20 years since Shakira and Jennifer Lopez went blonde and helped build demand for bilingual Latin pop in the U.S. mainstream, they came full circle with their Super Bowl debut. And it was nothing short of brilliant to invite New Latino gangsters J Balvin and Bad Bunny — two of the most prolific hitmakers today, and both recently nominated for Grammys. Perhaps understanding the gravity of this moment, the duo skipped the music awards ceremony last weekend to rehearse covertly in Miami with the women who helped pave their way. (Though it’s worth noting that neither Shakira nor Jennifer were the first Latinas to ever headline a halftime show — that accolade belongs to the honorable Cuban-American Gloria Estefan, who in 1992, braved the elements to sing “Get On Your Feet” in frigid Minneapolis.)

If anyone knows what it takes to transition from the Spanish-language pop music market, it’s Shakira. First, the Colombian singer-songwriter strategically deployed an arsenal of hits on Sunday familiar to her anglophone fanbase. She kicked it off with her 2009 disco cut “She Wolf” and, with a Gibson Flying-V in hand, shredded through her 2014 rock number “Empire,” before an orchestra segued into a cover of Led Zeppelin’s “Kashmir.” Then, with rope in hand, Shakira Mebarak Ripoll flaunted her paternal Lebanese heritage with the opening lines of her 1998 Middle Eastern-Latin house hit, “Ojos Asi,” then freaked it with a belly dance break. (Relish the thought that, hopefully, somewhere in the box seats, Rupert Murdoch’s heart rate was skyrocketing.)

Shakira’s scintillating choreo was cut short upon the start of a reggaeton remix of 2001’s “Whenever, Wherever.” Covered in no fewer than 13,000 Swarovski crystals, Puerto Rican trap singer Bad Bunny surfaced to perform a version of his bilingual hit “I Like It” — albeit sans Cardi B and Balvin. Together he and Shak followed with a salsa remix of Shakira’s Spanish-language smash, “Chantaje,” during which Bad Bunny blended in lyrics from his 2019 single, “Callaíta.” After dazzling millions of viewers with her 2005 super hit, “Hips Don’t Lie,” Shakira revived the Nineties rockera we knew from ¿Dónde Están los Ladrones? by indulging in a carefree crowd-surf. Upon returning to the stage, she let loose a celebratory Arab whoop called a zaghrouta — now a viral meme — then brought it all back home with an Afro-Colombian dance crew and Swing Latino salsa troupe. As the night’s only visibly black performers, they educated American audiences on the African roots of many coastal Colombian traditions, including folk dances like the champeta and mapalé.

Enter Jenny From The Block — perched atop a skyscraper-turned-stripper pole, like a modern-day Queen Kong — no doubt in homage to her regrettably Oscar-snubbed performance in Hustlers. Clad in a black leather jumpsuit, Lopez shouted out the Bronx as she doled out enduring megahits — “Ain’t It Funny,” “Get Right” and “Waiting for Tonight” — flanked by dancers writhing in nude bondage gear. Despite her boycott from the show, at the very top of the stadium, Lopez’s Hustlers co-star Cardi B was seen singing along in approval: “Don’t be fooled by the rocks that I got/I’m still Cardi from the Block… We from the Bronx, New York!”

Cardi B singing “Jenny from the block” at the #SuperBowl #HalftimeShow pic.twitter.com/ppg6tN3jjf

J Balvin coyly slid into centerstage with his Major Lazer-assisted track, “Que Calor,” as snippets of J. Lo singles “Booty” and “El Anillo” echoed throughout. Balvin proceeded to for his first-ever Number One hit, “Mi Gente” — notably sans Willy William and Beyoncé, who would have helped further electrify the act. Still, Lopez gave it a high-octane mashup with her anthemic 2001 single, “Love Don’t Cost a Thing” and “On the Floor.” (Where was Pitbull, you ask? The Cuban-American MC had performed earlier during the pre-game show.)

Backed by the Children’s Voice chorus, Lopez and Marc Anthony’s 11-year-old daughter, Emme Maribel Muñiz, deftly led the transition into J. Lo’s 1999 salsa number, “Let’s Get Loud.” On first watch, it was all too easy to miss the fact that they were singing in stylized cages — an effectively chilling choice in set design — representing the many asylum seekers and their children incarcerated in cages today. “If you wanna live your life/Live it all the way and don’t you waste it,” sang young Emme. Nearby, Shakira was throwing down on the drums.

As Emme began singing the chorus of Bruce Springsteen’s protest anthem, “Born in the U.S.A.,” Lopez emerged donning a feathery cape, decorated to resemble the American flag. When flipped Lopez revealed, or shall we say RuVealed, a Puerto Rican flag beneath — reminding many viewers that Puerto Rico, however under colonization, is still part of the United States. The move spoke volumes to Puerto Ricans, some of the most acute victims of the ongoing climate crisis, as they face punitive negligence from both the Trump administration and that of Governor Wanda Vasquez.

Together with Lopez, Shakira repurposed her stadium-sized, FIFA World Cup anthem “Waka Waka (This Time for Africa)” —  but this time, for America. After a closing champeta segment and vigorous butt shake, the pop divas shared one triumphant bear hug. By the show’s end, the performance even earned rave reviews from former Florida Governor and Republican presidential candidate Jeb Bush: “Best Super Bowl half time show ever,” he tweeted.

Still, whenever, wherever, and without fail, the Super Bowl serves as a modern-day colosseum where America’s racial tensions are stoked and sent spiraling from the field into your screen. For every time a Kansas City tailgater does an “Arrowhead Chop,” the ongoing genocide of indigenous peoples across the Americas is rendered inconsequential. For every NFL player that’s been lauded for supporting Trump, one can find another being slammed for protesting police brutality. After all, who can be surprised anymore? The Super Bowl is brought to you by the same network that fueled the careers of pundits like Bill O’Reilly, Tucker Carlson, and Laura Ingraham, who’ve unabashedly used their platforms to fan the flames of prejudice. How revolutionary can such a platform be, when the potential for growth is fumbled at every turn?

Yet as much as this game has further inflamed divisions in the United States — it’s impossible to play down the fact that for 15 fleeting minutes, hundreds of millions of eyes were on Latinas. And not just Latinas, but Latinas getting loud. Latinas speaking out against the abuse of migrants. Latinas schooling Anglo-Americans on both the racial and cultural diversity of Latin America. May there come a day when people across the spectrum of gender, race, class, and citizenship are valued the way we should be. But this mission — should each of us choose to accept it — did not start, nor should it stop, with an NFL halftime show.